Democracy in the U.S. definitely needs some updating … and I think Ceres represents democracy and can give advice as to what is needed. But why do I think she is important? I have been an avid fan of hers since her upgrade from asteroid to planet in 2006, and have carried out a lot of research to help uncover her meaning.

Apart from my research on elections here in the Netherlands, the UK and in the U.S., and Brexit, her position in the heavens convinced me that she plays an important role in democracy. She is between Mars — the last personal planet, our will, and the first social planet — Jupiter, laws, strategy and vision for groups, including countries. She is the go-between of the will of the people and political systems. As such, she negotiates and sticks up for all underdogs against the powerful ruling classes. She said “NO” to Jupiter and Pluto in the myth in order to get what she wanted. In my view, she represents a strong, wise, feminine archetype.

In my research into the the U.S. elections I looked at which Sun signs were most favoured for a president. For me the Sun sign is relevant as I see it as an important part of vocation, another area of focus in my astrological consulting. You can fulfil your vocation best in a country or organisation that fits with your own calling

Looking at a list of Sun signs of those who won elections, Aquarius and Pisces are the most common. (1) (See footnote for details.)

There are reasons why so many Aquarians win elections. War is partly the culprit, as Aquarian Franklin D. Roosevelt won four elections and served between 1933 and 1945 as the longest serving president. This can no longer happen as the number of terms a president can serve is now limited. In some ways Aquarius seems a rather unlucky sign as five of the Aquarian presidents died in office, (including Roosevelt), two of whom were assassinated, Lincoln and McKinley. And there was an attempt on Reagan’s life as well.

So back to the U.S. chart. What might that attract? And what might the people want? The Moon in a country chart represents ‘we the people’. In the US chart known as the Sibly chart, which many astrologers use, the Moon is in Aquarius! So anyone who resonates with this sign seems to have an advantage. These words from the Declaration of Independence have a very Aquarian feel too: ‘We hold these truths to be self-evident, that all men are created equal, that they are endowed by their Creator with certain unalienable Rights, that among these are Life, Liberty and the pursuit of Happiness.’

So perhaps it is not so surprising that Aquarians rule. (But of course I knew that :)) Anyone want to donate a few million so I can have a go? I’m sure we could get around the birth-place issue!

But what about Pisces?

At first glance, the horoscope many use for the U.S. would not seem very Piscean. However, when you add my favourite, Ceres –  the dwarf planet that I associate with democracy – this changes. Ceres is in Pisces. I think for a long time the U.S. has acted out the Sun in Cancer – from patriotism to family values to protectionism, and the aspects with the Sun with Jupiter – think big, expansion, bigger is better, religion. And Saturn –  rules from government and a business focus. But since Ceres made a comeback in 2006, she (often in the form of women) is standing up for the earth, women and the less advantaged in the population.

Ceres in Pisces in the U.S. chart represents the possibility of a compassionate and visionary democracy.

Here are a few examples from previous presidents who have won at least two elections:

Of course, because the Sun (which represents leaders) in the U.S. chart is in Cancer, Cancer will often be part of a president’s horoscope as it is with some of these presidents above. However, it seems that having planets in Aquarius and Pisces helps.

So what did the cosmos have to choose from in the last three elections?

In 2008, Obama (Jupiter and ascendant in Aquarius) was up against John McCain, who had Moon in Aquarius with Saturn and the Ascendant in Pisces. Perhaps Jupiter beats Saturn:) But in 2012 he was against Mitt Romney, who blows my theory – there’s always one! He has Sun, Mercury, Mars and Ceres in Pisces and Venus in Aquarius. That must have helped him get as far as he did. What Obama has that Romney doesn’t have is a planet in Cancer. Obama’s Venus is in Cancer – matching the U.S. Venus and Sun – so perhaps that and other connections he has were a stronger factor.

And so to Trump

Again, without using Ceres, Trump has nothing in either of our top signs. But Ceres is in Aquarius for him too as it was for a few of the earlier presidents. Maybe Ceres beats the likely Moon of Hillary! However, Trump does have a lot of Cancer energy – Mercury, Venus and Saturn – so that is a really important link with the U.S. chart which gave him a possible advantage in 2020 too.

What about Joe Biden?

Joe’s a Scorpio with three other planets in Scorpio, so he is determined! Like Trump, he has nothing in either of the top signs if you don’t use Ceres – but, he has Ceres in Pisces! Joe also has Jupiter in Cancer, so that was a factor in his favour.

So it was Aquarius vs. Pisces or Moon vs. Ceres?

I wrote before the elections: “Using my arguments and limiting it to Ceres and the Moon, this time one question is: Will the vote follow what the people need on an emotional level – the Moon? In which case Trump should win, as his type of democracy matches that emotional need. Or will they go for Ceres in the US. chart – the type of democracy and environment they want – Pisces? In which case Biden should win.

… on the level of consciousness of the U.S. voting public. Trump’s Aquarian brand of democracy resonates with the more negative side of Aquarius. The rebels, the individual right to do whatever you want, the cold,  I-know-best-and-I’m-never-wrong side that Aquarius can have. He will attract people who want an uprising.

Biden will attract people who wish for a more compassionate, inclusive type of democracy. However, Pisces energy can easily be seen as a victim or a sort of martyr. A democracy that is an unrealistic, do-gooder type of system. His message could be too vague. And he does seem to be hiding, compared to Trump.

Both types of democracy could be good – the best for the U.S. would be a system that embraces the good in both signs. Freedom and equality for individuals AND compassion and support for everyone. These don’t have to be mutually exclusive.”

Any planets in Cancer can’t be ignored as the U.S. is looking for Cancer qualities in its leaders. As mentioned, Trump has this energy, which can be seen in his family-oriented nepotism and his protectionist policies. I have written more about Trump in a previous post. This is the energy that gave him an advantage over Hillary Clinton, I think.

Joe Biden is a bit different. Although he doesn’t have as much Cancer energy as Trump, he has Jupiter – the planet of politics and strategy in this sign.

I don’t often say this, but I think in the current climate, this is quite scary. There are several planets in Aquarius, a sign of wanting to be right! The Moon is what is known as void of course. In some charts this is taken to mean ‘nothing will come of the matter.’ Could this mean the inauguration can’t go ahead? 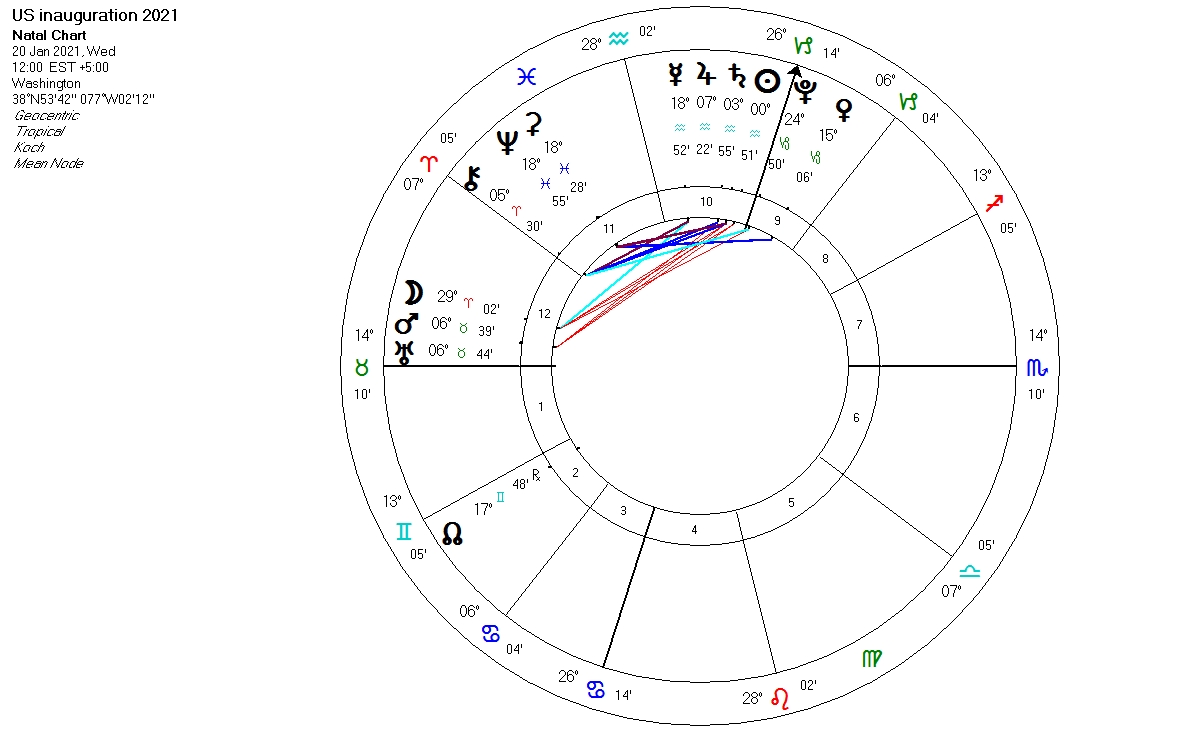 The Moon is in the very last degrees of Aries, a very strong position in a combative sign. However, more worrying in the current climate is that Mars and Uranus are together and very near the Ascendant. This could indicate stubborn (in Taurus), aggressive (Mars) rebellion (Uranus). Add to that Pluto right overhead at the top of the chart and we have the potential for powerful and devastating acts.”

(It turns out that some of this happened before the inauguration which thankfully went smoothly, albeit with heavy security).

“Ceres is in Pisces by the inauguration, but she is right next to Neptune, which could imply total confusion about the democratic process. Of course all of these positions could provide the catalyst for powerful, positive reform and new caring forms of democratic reform.”

I hope this is how it will work out. In Biden’s first 100 days we have seen his determination to get on with it!

We have a role model: RBG

I was sad to hear of the passing of Ruth Bader Ginsberg. What a remarkable woman. She was a much needed force on the Supreme Court of the U.S. (SCOTUS) and will be sadly missed. Looking at her chart I was struck by the fact that the same themes emerge in the Supreme Court chart and in hers.

In the triangle on the charts below are all the planets in Aquarius and Pisces. The inside chart is of the U.S. which I discussed above – with the Moon in Aquarius and Ceres in Pisces. But look at the middle chart – SCOTUS. It has three planets in Pisces – Mercury, Saturn and Venus, and three in Aquarius –  the Sun, Ceres and Pluto. 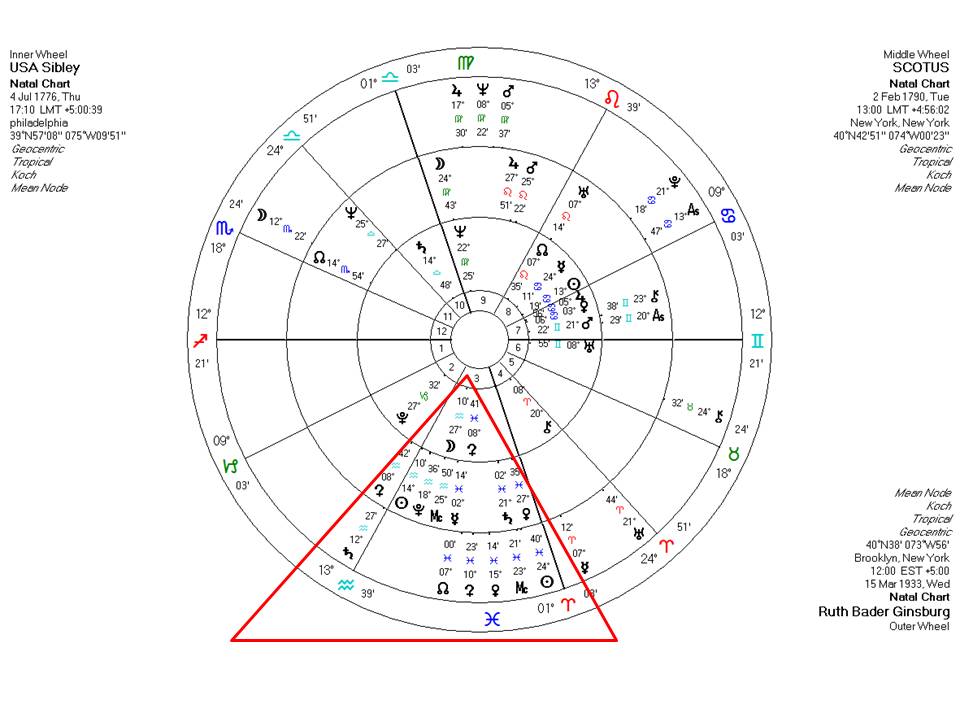 And on the outside is the chart of RBG. We don’t have a birth time for her, so her MC shown in Pisces is not accurate. However she still has Sun, Venus and Ceres and the North Node in Pisces and Saturn in Aquarius. I find this quite an astonishing fit with the U.S. chart – in particular Ceres in the U.S. and in RBG’s chart at almost the same point! She is a wonderful example of what U.S. democracy could be – Ceres stands up for women and all the disenfranchised. In Pisces, Ceres is compassionate but according to the myth she confronts privilege, greed (Jupiter) and power (Pluto). She is tough, as was Ruth.

With the outpouring of grief and respect after RBG’s death, it seems that many are determined to follow her lead.

The day of the inauguration

What actually happened at the inauguration augurs well too, I think. I was glued to the screen watching the event as the Ascendant and MC passed through the various planets. Astrology really does have a sense of humour! We had the perfect expression of Mars and Uranus in Taurus as they crossed the Ascendant. Lady Gaga was the perfect voice (Taurus) for performing the National Anthem at that precise moment, and Uranus would have been proud of her outfit! What a wonderfully positive expression of Mars-Uranus.

As Joe Biden spoke his first words before midday, Pluto was exactly on the MC, very fitting for a Scorpio president and something that shows he means business in his will to radically transform the US.

However later, Ceres and Neptune in Pisces sextiling Venus, in the form of a young woman, stole the show. When the Ascendant hit 18 degrees picking up Mercury and the Ceres-Neptune conjunction, after Amanda Gorman had read her poem, the world fell in love with everything about her. What a fitting symbol for a new type of democracy, a young, black, woman who is a gifted poet. Oh yes — Ceres was present!

Bio: Faye is founder of the Amsterdam School of Astrology. She is a therapist and business consultant, holds an MA in Cultural Astronomy and Astrology, and has spoken often at major international conferences. Her book, Vocational Astrology, forms the basis of her tailor-made Vocational Apprenticeship program.
Faye offers a wide variety of astrological services. Please visit her wonderful website for details.