1. Mars conjoins Saturn on the 4th, a tough combination at best, but one with potential rewards. Mars’s assertive, impulsive, and energetic force blends with Saturn’s cautious, strategic, and deliberate stance. These two are within orb from the 1st–9th, and for those under its influence, it may bring a heavy workload, increased and unwanted responsibilities, and plenty of frustration. For those who are working within the natural limits of these two planets, slow but steady advances can be made with reliable partners (Mars is also conjunct Juno) and a look toward long-term success. Ukraine’s Moon at 22° Aquarius (symbolizing the Ukrainian people) opposes Putin’s elevated, authoritarian Pluto at 22° Leo, marking this Mars–Saturn conjunction as a critical turning point in the war.

2. Jupiter conjoins Neptune on the 12th and this combination is highly influential from the 7th–17th. As co-rulers coming together in their own sign of Pisces, Jupiter–Neptune here is a major influence in personal and collective affairs, with favorable and unfavorable potential. Expect increased interest in the spiritual, mystical side of this combination, as well as stimulating the imagination, creativity, and interest in the arts, especially music. The downside can bring increased escapism from the harsh realities of daily living, fantasy, and even deception on a grand scale. Ideally, one can use the connections to Saturn and the North Node in Taurus to begin manifesting one’s hopes and dreams. Empathy increases dramatically.

3. The Sun octiles (45°) Venus on the 13th, an influential combination from the 3rd–20th. This amorous dynamic goes well with the budding spring season, since it makes us more socially active, caring, flirtatious, and affectionate. The octile, also known as the semi-square, is a challenging aspect, but when it connects the Sun and Venus, it’s generally a pleasurable vibe. Love is in the air during this 17-day phase, but a potential downside is that attractions can become spontaneous and be outside expected relationship boundaries. Romantic triangles can develop, testing one’s commitments. Friendships may become especially close. The assertive Sun in Aries combines with the universal lover — Venus in Pisces — to bring people of all stripes together.

4. Saturn squares the North Node on the 21st, but this connection is within a one-degree orb from the 19th–29th, making a relatively lengthy phase when destiny or fate seems to step in. Saturn may bring harsh experiences within your network or circle of friends, forcing you to question your involvement with any unreliable factions. Those with important placements at 22°–24° of any sign fall under the influence of this aspect, since transiting Jupiter and Neptune in Pisces are in the same degree. On the plus side, Saturn’s practical nature can bring Jupiter–Neptune’s imagination into the real world, offering steady advances in business or the job environment based on innovative, creative ideas.

5. The Solar Eclipse at 10°28’ Taurus arrives on the 30th (4:28 pm EDT) and likely brings major life changes for those with important natal placements at 8°–12° of the Taurus–Scorpio polarity. These changes will be the culmination of recent events, since transiting Uranus has just passed through this degree area. When set in Washington, this chart shows some significant successes for the Biden administration (Venus–Jupiter sextile Pluto trine the Virgo Ascendant), likely associated with the Ukraine crisis. However, with Saturn near the US Moon, gas prices, high inflation, and other discontents may make the American people less than enchanted. Concurrent with this eclipse, Pluto is stationing retrograde (while sextile Venus–Jupiter), indicating key institutional players are moving Big Money to new places. 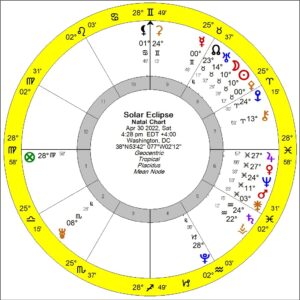