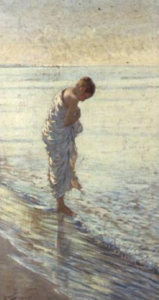 In a previous post, I used the metaphor of the submarine to explain the Sun and the Ascendant. The Sun is our deeper self; it is the driver of the submarine. It has intention and purpose. The Sun is Spirit and its natural environment is the spiritual world. Down here, on Earth, is like the bottom of an ocean for a spiritual being accustomed to living high above.

Incarnating is like getting into a submarine. Once at the bottom of the ocean, we appear to other submarines as one of them. The Ascendant describes the external appearance of incarnated beings. This is not just physical, as we express attitudes, behaviours, ways of moving and speaking that are unique to us.

At a simple level, we have submitted to the conditions of our incarnation while our purely spiritual selves lie within. Of course, the submarine is nothing but a metaphor. Please don’t take it too literally!

The Sun has no substance; it is an outpouring of creative energy from spirit. The Sun is a symbol of spirit and its symbol is a dot at the center of a circle. This dot represents the spiritual origin of the world, the act of creation out of nothing, ex nihilo. The dot in the circle is the simplest and most essential of mandalas. Everything, absolutely everything revolves around it, but it’s not a thing, it’s no-thing.

It is a symbol of energy; it is life, warmth, and light. The Sun is also a symbol of consciousness.

The Ascendant is the surface. It is like our skin and also a frontier, a barrier. The many shades and colours of our skin are characteristics of the surface only. One tenth of a millimeter under the surface could be a different color and we wouldn’t know.

We can also say the Ascendant is like the facade of a house; it is a surface, yet it is not superficial or frivolous. The Ascendant is the interface between the inner and outer worlds. It is the meeting place.

How does the Moon fit into this picture?

Below the surface is the realm of the Moon, but, paradoxically, even the surface belongs to the Moon. The facade of a house is part of the house.

The entire submarine is the realm of the Moon, as this “submarine” is a living organism. It was born from a mother. It is made of flesh and blood; it has needs, instincts, emotions and memory. It has fantasies and dreams. It has ancestors.

It can drive itself, and in many cases, it does. It is wise.

However, its auto-driving style is not exactly creative. It is merely replicating old patterns. These patterns are basic instincts such as thirst and hunger, need for safety, need to belong, urge to mate and provide for children. Other patterns come from social conditioning and inherited traumas. The most valued ones are called traditions.

The Moon repeats. To feel the Moon, let’s sing a song about the eternal return of the past. Let’s contemplate waves and tides, let’s listen to the voices of our ancestors. Let’s tell the story of a snake biting its own tail.

So many Suns, so many submarine drivers are sleeping like babies most of the time! The Moon, Queen of the Night, is an enchantress who makes the Sun sleep! Is life just a dream?

However, shit happens. We need an alarm clock, don’t we? The Sun is not a pattern. The Sun is spirit, it is consciousness, it is the “divine spark” that is our real identity. Spirit is, by definition, not material. It has no thickness. It has no substance and no shape — but it can create.

At the Sun level, we are one with the Great Spirit. Old scriptures state that we are made in the image of God. Carl Gustav Jung, when talking about the archetype of the Self, says that it’s not distinguishable from the archetype of divinity.

These considerations can be seen as nothing but metaphor, if you wish.

The Sun is the Creator, both at macrocosmic (God) and microcosmic (ourselves) level. The Sun is able to fertilize the Moon with new seeds.

When the Sun awakens, instead of repeating patterns, as the Moon does, we can do things for the first time. This can include awakening to different levels of consciousness, but it can also mean things as simple as going to a new place, starting a new hobby, saying things we have never said before, getting in touch with people we don’t normally get in touch with. We can also change our thinking habits if we want to. We are free to do other things rather than reproducing patterns, at all levels.

In particular, we can switch off the subconscious repetition of the old traumatic energy by doing something different. This is healing and easier said than done, I know.

The placement of the Sun in our chart describes where and how we are called to this heroic process of awakening. The placement of the Moon describes the state of the submarine at the beginning of the process. An interesting question for interpreting a chart: “To what extent do Sun and Moon conflict?” Imagine you’re slowly waking up in a submarine on autopilot that is heading toward … just where you don’t want to go! And it has momentum!

Reality is always more complex than the metaphorical pictures we can use to describe it. If we take them too literally, we may think that there are only two cases: submarines that drive themselves whilst the driver is sleeping, and submarines with an awakened driver able to live a meaningful life.
In fact, as far as my own sleepy consciousness can tell, there is a spectrum of cases.

On one end, a few submarines are on autopilot all the time. They are completely predictable. Good astrologers could tell the story of their lives in advance. On the other end of the spectrum are fully enlightened beings.

Imagine rays of golden light radiating from the invisible driver’s seat, passing through the silvery texture of the submarine and creating a halo around the vessel, especially perhaps around the head. (Think of the numerous representations of saints in Western culture.)

Most of us are somewhere in between. On our evolutionary path, the light expands as we learn to know ourselves — body, soul, and spirit. Sun and Moon are Yang and Yin, Spirit and Nature, the two fundamental and opposed forces. Everything is made from them, including the other planets.

All of the planets can be examined within the metaphor of how the submarine functions. Mars, for instance, may show something about the speed of the submarine, the power of the engine, and the style of its torpedoes.

Is it guided by the spiritual captain (the Sun) or only by its habitual patterns and maintenance needs (the Moon)?

I don’t think it’s possible for the astrologer to answer this question on the basis of the chart only. As Liz Greene wrote: “The chart we’re looking at might as well be the chart of a chicken, or a building.”

If we could predict what a being endowed with free will would do with their life, would that be free will? However, we may know about intentions that have been set before the incarnation and about the timing of the alarm clock (which is very significant in itself!).

An astrological session is best as a conversation. Life will always be more imaginative than the astrologer. By necessity we speak in universal concepts. We can make some sense of the chart by looking at it, yet we can’t guess the particular, unique and individual ways of expression of the universal archetypes.

Let’s be full of surprise and wonder!

Jean-Marc Pierson: I was born on November 4, 1961, at 9:30 p.m. in Laxou, France. I have Scorpio Sun and Cancer Rising. My mother died, I had a dysfunctional stepmum, and I had to go to mass every Sunday. I learned a lot. I studied psychology at university, kept sheep and goats in the mountains of the South of France, and found out I was good at storytelling around the time of my progressed New Moon. Storytelling is full of deep teachings and fascinating metaphors but people believe it’s for children. I bought my first astrology manual in 2003, and I moved to London on May 23, 2008 (check the transits!), and watched the economy collapse. I became a self-employed gardener, organized public speaking workshops, and kept studying and reading astrological charts. I also love writing. My website is Astro Stories, jeanmarcpierson.com. Email: astrostories@jeanmarcpierson.com