TMA is posting this blog as general information to our readers about the astrology of cryptocurrencies. We are not endorsing the author’s work.

In 2008, the world turned once again, this time into a wintery crisis caused by nefarious financial actors with full support from the governments we try so hard to trust. The 2008 financial crisis lured thousands — if not millions — into borrowing subprime mortgages attached to a lit fuse. Forced foreclosures came, followed by bailouts, coverups, and incalculable pain around the entire world; this seems to be an experience from which we haven’t learned. Nobody went to prison, innocent people became homeless, and the system kept on chugging along, pouring its black smoke into the heavens. Then came Occupy Wall Street, helping bring context to the 99% — which most of us are suffocating within. It was a dark pivot in modern history, yet among all the chaos of the time, the anonymous individual (or group) who called themself Satoshi Nakamoto released a white paper on bitcoin laying out their vision of a money that cannot be corrupted or manipulated. They shared it with a few dozen of their cyberpunk friends, and shortly thereafter, on January 3, 2009, the first bitcoin was mined. The planet Pluto had also just ingressed into Capricorn. A golden light began to shine in the darkness. It ran on hope, just like the new president who took office just after bitcoin was first mined. Scarcely a decade later, nearly the whole world knows its name.

The United States recently entered its exact Pluto Return (27° Capricorn): a time when power dynamics between the state and its populace are revealed, toxicity is exposed within all systems, and the truth can’t help but find its way to the surface for all to see if they are willing to look. It would be tough to argue that the Pluto Return began in 2008 (with Pluto’s ingress into Capricorn), but I think we can confidently say there were intimations of what was to come. The story and its macabre themes have predictably intensified the closer Pluto has gotten to 27° Capricorn. Since early 2020, the beginning of the pandemic, the Federal Reserve has printed 40% of all the dollars in circulation (roughly $8 trillion), propped up markets, allowed elected officials to inside trade, and the mega rich to buy up all the real estate around the world, creating a renter’s class out of much of the population. These themes aren’t specific to the US, but are global trends. As I write this, on April 12, 2022, the Consumer Price Index is 8.5% (probably much higher in reality), and The Bureau Of Labor Statistics tells us that it’s Putin’s fault. Unfortunately, scapegoats don’t work with Pluto, and bitcoin not only keeps up with inflation, but also leaves it in the dust with market bears (i.e., those who are pessimistic about financial trends). On average, bitcoin appreciates in value against the dollar by 150% per year.

Returning to the beginning of bitcoin, cleverly nestled within the genesis block (that is, the first bitcoin to be mined) Satoshi Nakamoto pasted this message from The Times: “3/Jan/2009 Chancellor on brink of second bailout for banks” (1)

Bitcoin has never received a bailout, nor will it ever. It is the world’s first digital money. It is decentralized, is the most secure computer network in the world, and its immutable ledger has survived 13 long years since Pluto moved into Capricorn when Satoshi released the white paper. Because it solves the “double spend” problem which challenges all cryptocurrencies, and no centralized authority can control it, it’s a perfect hedge against any irresponsible monetary policy. With a fixed supply and an open/immutable ledger, it is the sound money that gold has always dreamed to be. (2)

Bitcoin is freedom money. It’s a computer network that rewards all participants and protects its value better than any military in the world. Bitcoin requires no trust of a third party, only verification to participate. (Verification happens in a decentralized manner on the network by what are called “nodes” and “miners.”) There is no possibility of toxic behavior within the actual network, only in the perceptions of those around it. I once asked Pluto about bitcoin — he winked, and then gave me laser eyes. (3) 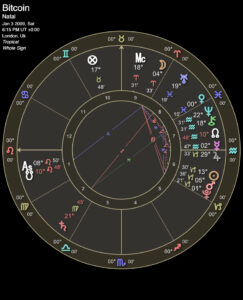 Like all things, bitcoin has a chart. There are many outstanding features in the bitcoin chart that elucidate the themes already mentioned. The Aquarian North Node next to Mercury tells an epic story of how this technology empowers the people, giving them access to sound money, rather than government-issued fiat. The co-rulers of the Aquarius North Node (Saturn and Uranus) are opposed to one another in the chart (Virgo and Pisces; 2nd and 8th houses) which comments sharply on the tension between the old financial system and the nascent one. There are many features we could unravel in the bitcoin mystery, but it’s Pluto who always emerges first in my mind when I think of the bitcoin chart.

If using whole sign houses, Pluto sits in the first degree of Capricorn in the 6th house. Mars, the Sun (ruler of the Leo Ascendant), and Jupiter are all copresent in Capricorn. Seen through the eyes of Pluto as he transited over each of them, it became clear that Pluto is skilled at revealing toxicity and killing off what is no longer needed. For example, in 2011, Pluto passed the 5° Capricorn Mars and the recession had nearly run its course, Occupy Wall Street was almost in full swing, and bitcoin was just finding its legs. Mt. Gox, the first major exchange to purchase bitcoin, was “hacked” and nearly 500 accounts were robbed of their bitcoin. (The total was 25,000 bitcoin.) (4) When Pluto transited over the 13° Capricorn Sun in 2014, Mt. Gox, after years of dodgy behavior, finally shut it’s site down. Even though Mt. Gox was a shady corner of the internet and a great place to lose your bitcoin, it helped spawn the main procedures we use today — e.g., revealing the need for more security and regulation around how bitcoin should be exchanged. Now, with Pluto approaching Jupiter on the anaretic 29th degree of Capricorn, bitcoin is a cultural phenomenon, with millions who have already been orange-pilled, becoming believers of the bitcoin standard and it’s role in our future. (5) Lots of toxicity remains — mainly due to uneducated perspectives of what bitcoin is and why bitcoin is needed — and it has come a long way since its conception back in 2008–09. Also, in October 2021, Mt. Gox appeared from the grave to announce the Civil Rehabilitation plan to pay back many of its users affected by the early hacks and restore their lost bitcoin.

Bitcoin is already legal tender in El Salvador, with Mexico, and Madiera, Portugal making big announcements at the recent Bitcoin conference of their plans to do the same. (6) More and more businesses, major hedge funds, and banks are putting bitcoin on their balance sheets as well. Even the US government has recently said that it doesn’t plan on banning bitcoin, but regulating it instead. The future is a brighter one thanks to bitcoin … and Pluto. The two keep us honest, with a profound deep respect for the value of trust. Pluto shows us how this works in our psychology; bitcoin reveals it in our economy.

In a sense, bitcoin is the digital correspondent of Pluto. Like ayahuasca in the botanical realm, or Jung in the psychological, bitcoin reveals what is toxic and sets out to heal the world by fixing our relationship to the truth. As sound money, with a fixed supply of 21 million, there will never come a moment when a government or any central player can simply print more. Bitcoin has perfect supply and demand dynamics. And with eight billion people alive and only 21 million bitcoin, it’s no wonder bitcoin is the ideal hedge against inflation. It’s volatile, yes, but year to year, it’s up only. (As noted above, on average, bitcoin appreciates 150% a year against the dollar.) Pluto approved.

Prediction: By the end of the decade, after Pluto has transited bitcoin’s Mercury and North Node in Aquarius, over half of everyone you know will own bitcoin. They may not have a whole one, but they will be eagerly stacking satoshis (unit of account for bitcoin; there are 100 million per coin) to add into their savings account of the future.

(1) What is the Genesis Block?

(2) Investopedia: How does a block chain prevent double-spending of Bitcoins?

(3) “Laser eyes” is a “tip of the hat to bitcoiners.” The uninitiated may learn here: Cryptotraders: Laser Eyes Trend Storms Crypto Twitter for $100,000 BTC

(5) Bitcoin magazine
“Oct 12, 2021 — Bitcoin is an orange pill for your reality and is the opportunity to free yourself from monetary bondage through knowledge.” 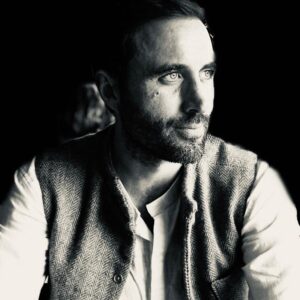 Find Adam Sommer at kosmognosis.medium.com/follow. And Patreon.com/adamsommer: “to support the creation of my writings/podcasts and be showered with gifts as well.” Also, his website: Holes to Heavens “to adventure deeper into kosmos, mythos, and psyche.”