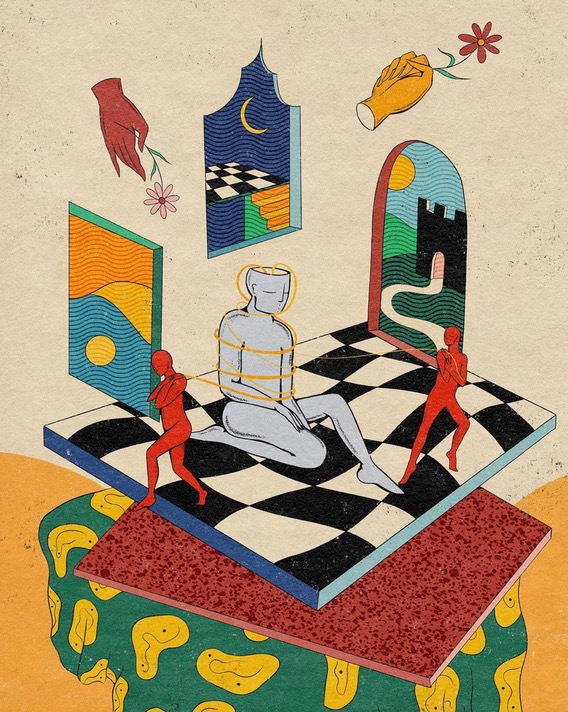 Let’s go back to the birth of the Universe.

I’ve been given a long leash with this new weekly blog segment I’m writing for The Mountain Astrologer, so I figure I should use this liberty to the fullest and start from the beginning… the very beginning.

We all love a good beginning. In fact, we’re a bit obsessed with them, aren’t we?

Our culture is rife with inception imagery and folklore, and often the story stops where the beginning ends.

“Happily ever after” equates to “we don’t want to bore you with the details because it all got a lot less interesting from there on out.”

And onto the next beginning, we go…

The entire framework of astrology hinges on the beginning: the day, the time, and the place we were born.

Without those key ingredients, all the details moving forward become a bit murkier.

A matter of minutes or longitudinal degrees can change the trajectory of the story.

In this sense, beginnings are fragile, both powerful and fragile.

The reason I want to begin at the very beginning is to inspire some inquiry around the implications of our most prevalent origin stories.

While the science around the current form of the big bang theory is beyond my comprehension, there are two glaring unknowns inside all its complexity: why and how?

That’s not even enough evidence to convict someone of petty theft.

And yet notions of material reality, somehow acting on its own volition to manifest itself has grand implications for what we understand about our existence.

Go ahead and grapple with that for a moment.

I’m not trying to undermine the entire field of astrophysics in a few sentences. God forbid, Neil deGrasse Tyson were to read this and absolutely torch me for my rudimentary understanding of these things.

However, I can still ask these two questions: why and how? Not even the most intelligent person on planet earth will be able to answer them.

I’m not saying I know, I’m just saying that no one else knows either. And that’s either reassuring or terrifying… or perhaps, a bit of both.

Genesis is a great word. Unfortunately, it leaves a bad taste in many people’s mouths due to psychological abuse inflicted during Bible study.

Unless you’re a Christian, of course, and an errant Google keyword search has landed you on this webpage. Feel free to turn back here.

For the rest of us looking to reclaim the notion of genesis back from its religious connotation, search no further than Phil Collins’ trench coat in this music video.

Hopefully, it’s clear that I’m no biblical scholar. In fact, I know very little about the Christian religion. What I do know is that one of the primary components of the Book of Genesis is a history of the patriarchal lineage of mankind.

As Western culture has secularized itself over time, I feel like the problematic implications of an origin story based on patriarchal lineages become more apparent.

Even if we reject Christian belief in our personal lives, there are still thousands of years of deeply rooted cultural values that must be dismantled in order to begin again.

I would argue that a cultural obsession with beginnings begets an avoidance of endings.

We still largely reify ideals of beauty around youth and resist the aging process.

And yet nowhere in the observable world can we find beginnings separated from the end that precedes them.

What needed to end for the Universe to begin? Can nothingness or nonexistence really end?

What ended for us to be born? Was there something that preexisted this current life?

I don’t ask these questions to point toward any particular spiritual doctrine or scientific explanation.

What if we just ask ourselves? Not with an expectation of a clear answer, but in a way that opens us up to the brilliant mystery of our lives.

We don’t have to know because clearly, no one else does either.

How freeing to recognize that the beginnings that have been handed to us are quite arbitrary and full of plot holes. Perhaps, this will afford us the opportunity to rewrite the narratives of our lives and explore our own personal genesis and what that means for us.