I have asked myself whether I can judge this accurately, given that I was wrong in 2016. As it happened, most astrologers were wrong in 2016. Many of the very small minority who got it right had made their prediction of Trump’s win way before the election.

As you may remember, the polls were decidedly in favor of a Hillary Clinton win for many weeks prior to the election. I guess I was not the only one misled by her huge lead, as I did not even wonder which candidate would win; instead I had asked myself what in Hillary’s chart showed that she would win. And, along with that bias, I was juggling at least three possible ‘correct’ charts for her.

As fate would have it, the astrologers who were asked to present their opinions at the ISAR 2016 conference had been emailed the (supposedly) “truly correct” birth time for Hillary only a week or two before the conference. It’s been my policy that if a client isn’t sure about the exact birth time, I won’t work on their chart. So, my initial mistake in 2016 was agreeing to form an opinion in spite of “dirty data.” But the 2020 U.S. Presidential election is different because we have AA data for Donald Trump and A data for Joe Biden. 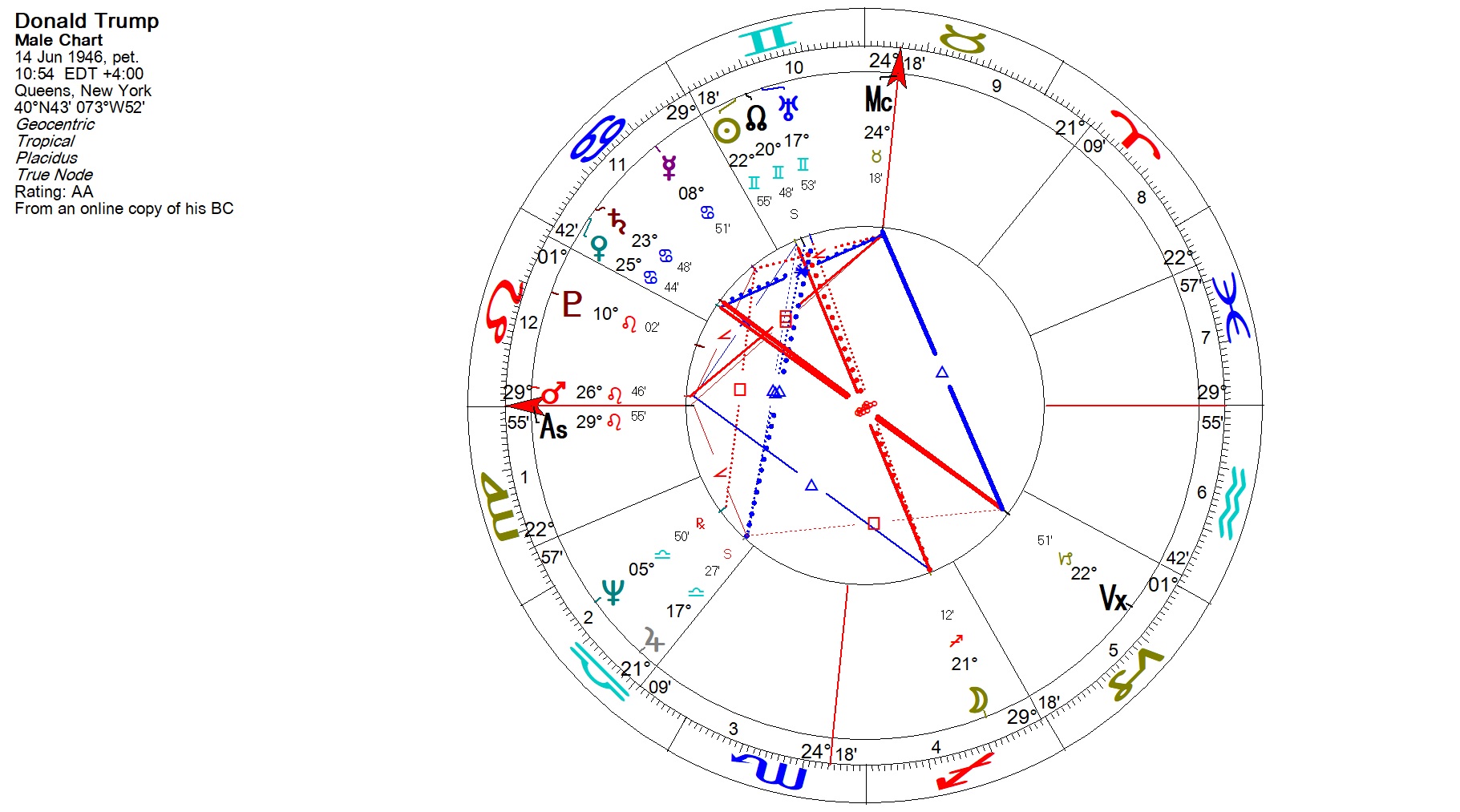 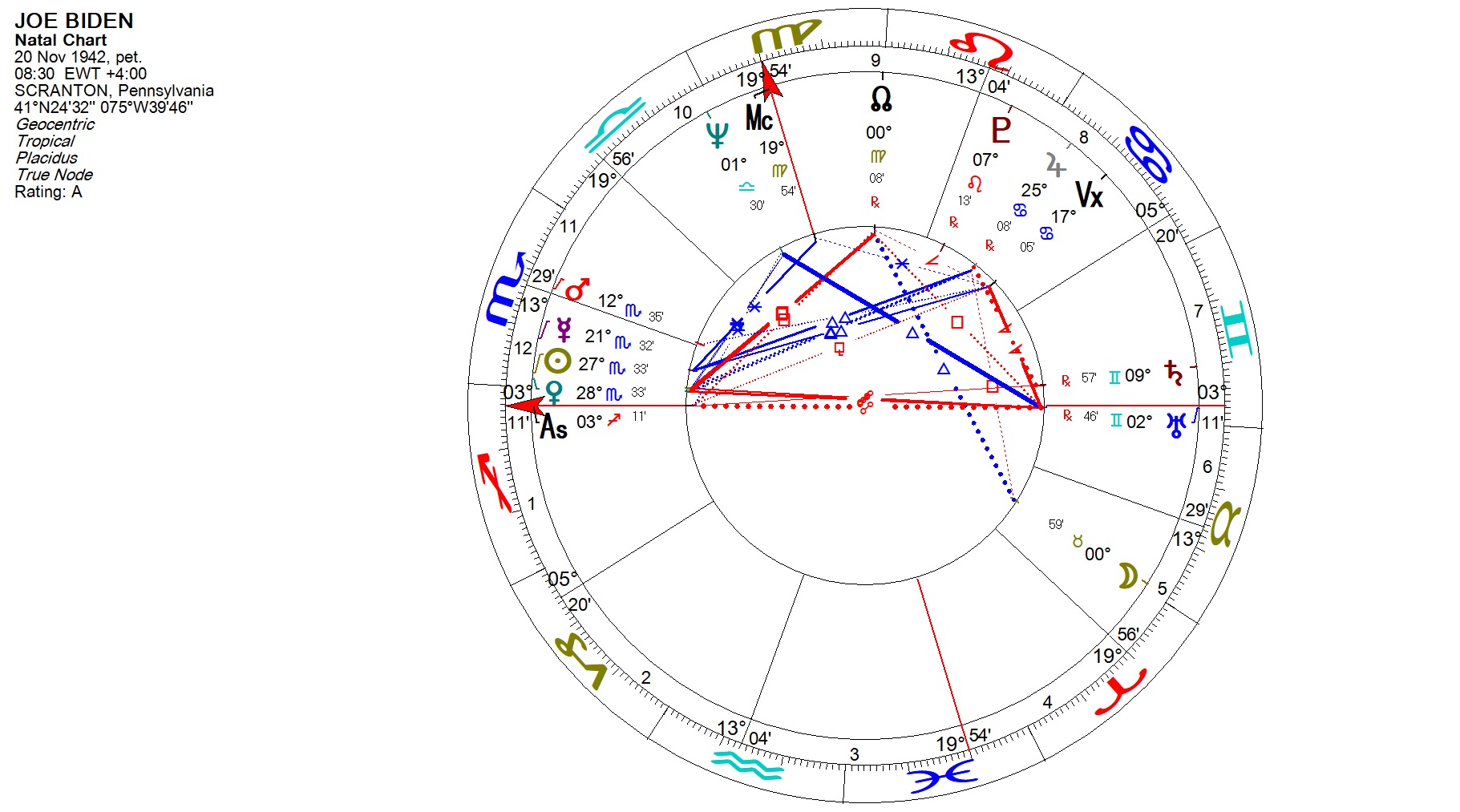 Clearly, Trump’s progressions were fantastic in late 2016 and early 2017. Particularly impressive was the fact that on Inauguration Day, January 20, his progressed Moon (25°43’ Cancer) was spot on his natal Venus (25°44’), the ruler of his Taurus 10th house of career and success. Also, his progressed Sun had recently crossed his natal Ascendant, while his progressed Ascendant sextiled natal Mars (October 2016), and while the progressed Moon was exactly conjunct his antivertex (22°51’ Cancer) on November 7. Cancer is the first summer sign associated with the “homeland” and the ‘common folks’ whose hearts he had won. In addition to that, both solar eclipses surrounding the election — September 1 at 9°23’ Virgo and February 26 at 8°09’ Pisces — were favorably aspecting Mercury, the dispositor of his 10th–house Sun. 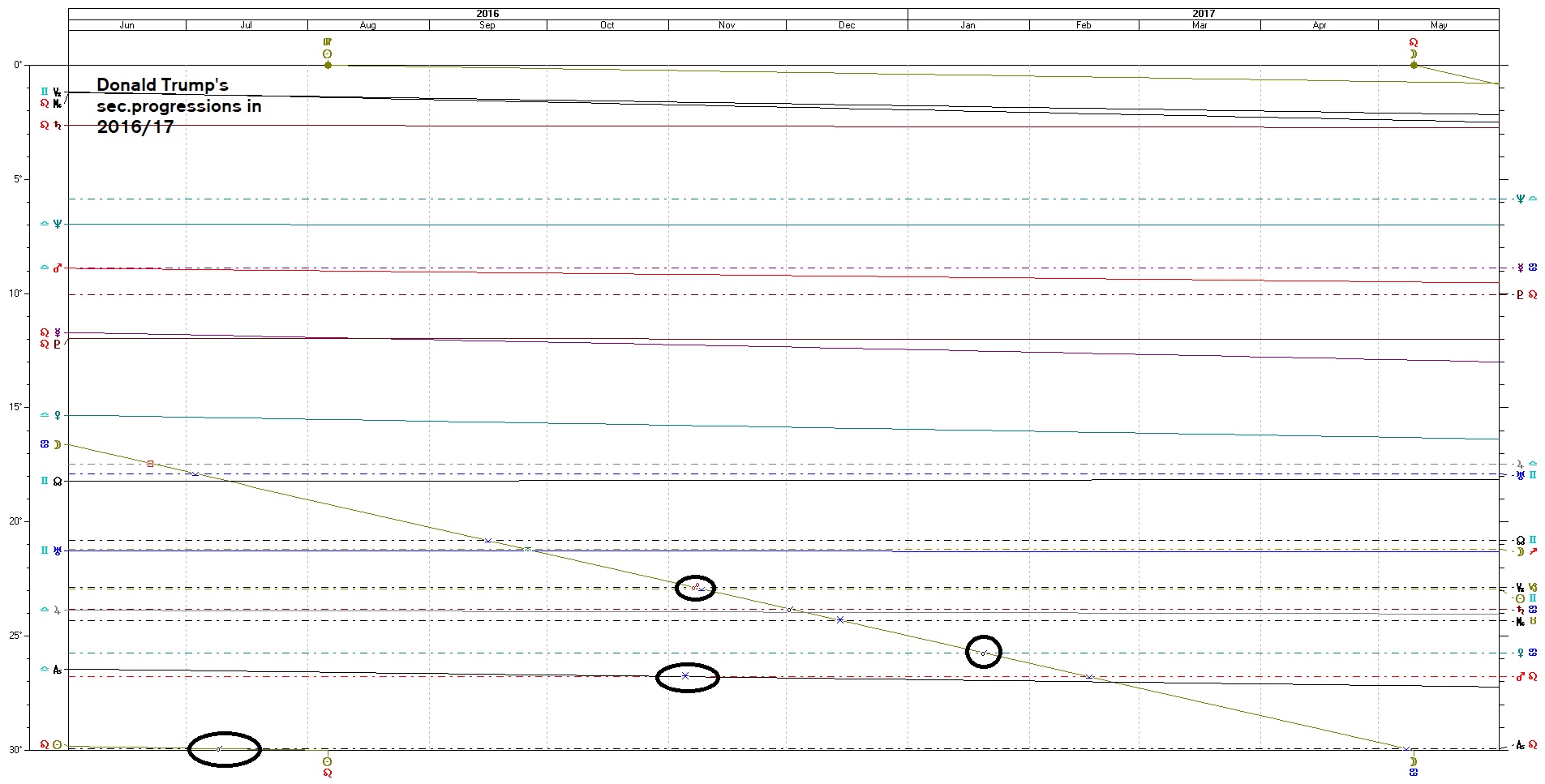 The logical questions: Is there as much power in his chart now and in the coming months, especially in early November 2020? Is there enough power to overcome his opponent, Joe Biden?

Let’s take a look. Trump’s progressed Moon has moved to Virgo, the last summer sign that does not have the strong, vital, cardinal energy of Cancer. It is called mutable because the seasons are changing when the Sun travels there. This shows that Trump’s underlying energy may be less inclined to fight, or initiate, than in 2016. In early November, the progressed Moon will be at 18°25’ Virgo, where it makes no aspects, except to square his progressed lunar nodes. (Note that I am using exact, 1° aspects.) On January 20, 2021, the progressed Moon will be at 21°16’ Virgo, just past the square to his natal Moon and nodes, and about to square his progressed Uranus (21°23’ Gemini). I interpret this configuration as “disconnected.” It looks to me like Donald Trump will leave office. (Interestingly, the transiting Moon will reach the 20th degree of Gemini on the evening of the election, activating this configuration.)

But before coming to any definite conclusions, we should check the closest eclipses. The November 30, 2020 appulse lunar eclipse (8°44’ Gemini) will semisquare his Saturn — a depressing influence —whereas the December 14 total solar eclipse (23°06’ Sagittarius) will take place in his 4th house (of endings), in an exact opposition to his natal Sun while quincunx to natal Saturn, confirming the indications given by his secondary progressions. 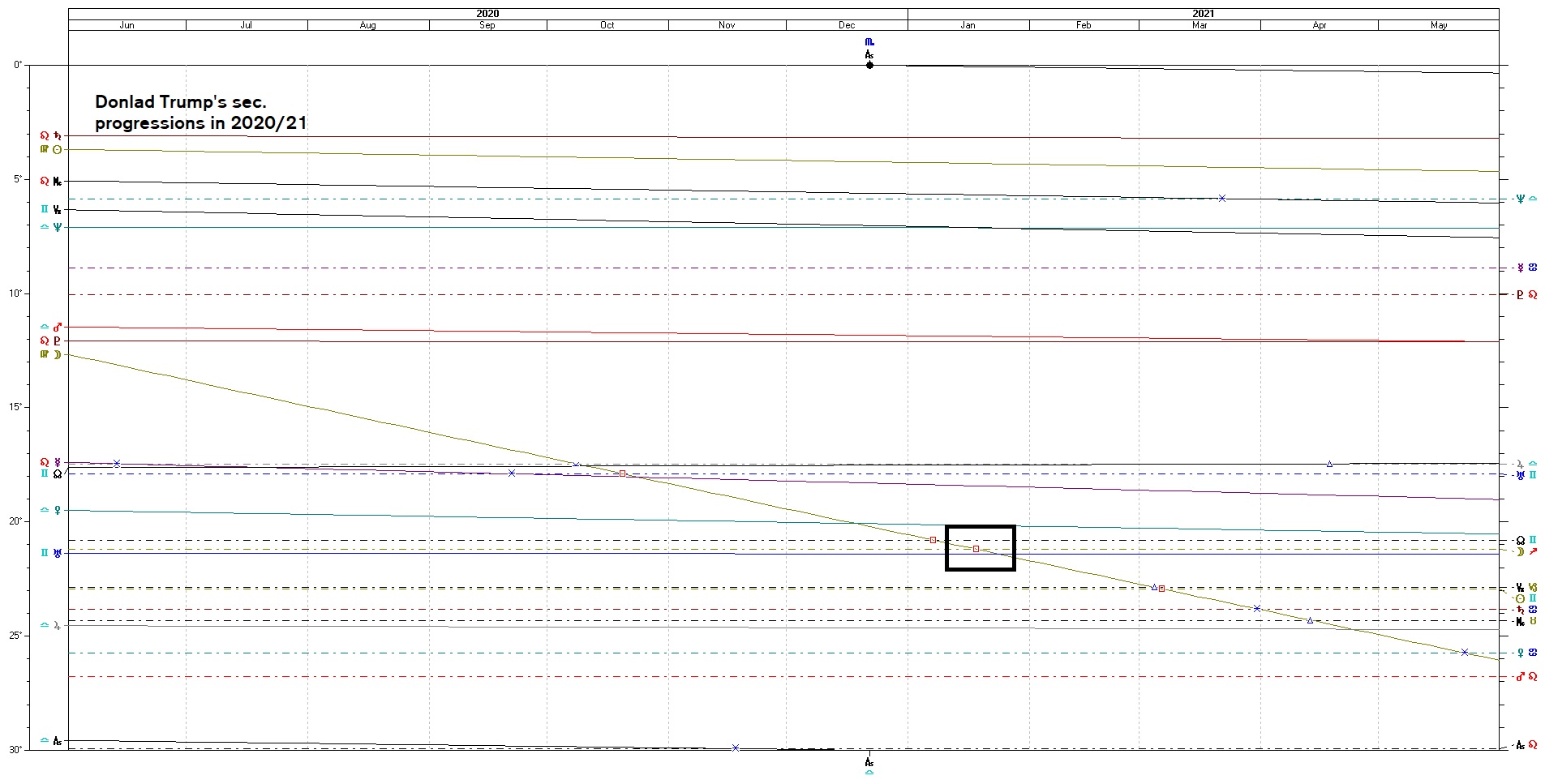 How about Joe Biden? His natal Mercury, ruler of his 10th house, is in an applying trine to his Jupiter (albeit from the “hidden” 12th house), suggesting a successful career. We have already seen this in his life, but the aspect will be strongly reinforced by transiting Jupiter (21°29’ Capricorn) in an exact sextile to his Mercury on election day. What’s more, the Sun will be conjunct his natal Mars, ruler of his 5th house of luck. The most recent solar eclipse — June 20, 2020 at 0°20’ Cancer — exactly sextiles his natal Moon and its node, showing a strong positive push in his current standing as the major force of the Democratic Party. The November 30th lunar eclipse (8°44’ Gemini) will be conjunct Saturn in his 7th house, whereas the December solar eclipse (23°06’ Sagittarius) will sesquisquare his Pluto. That’s not such a good thing, especially with his progressed Moon in mutable Pisces, which shows low energy or a lack of courage and dynamic force. On the other hand, politicians have been known to thrive during such periods due to the increased hope and idealism that voters project onto them. He could, therefore, personalize the Piscean ‘dream,’ which is certainly not a bad thing when it comes to elections. 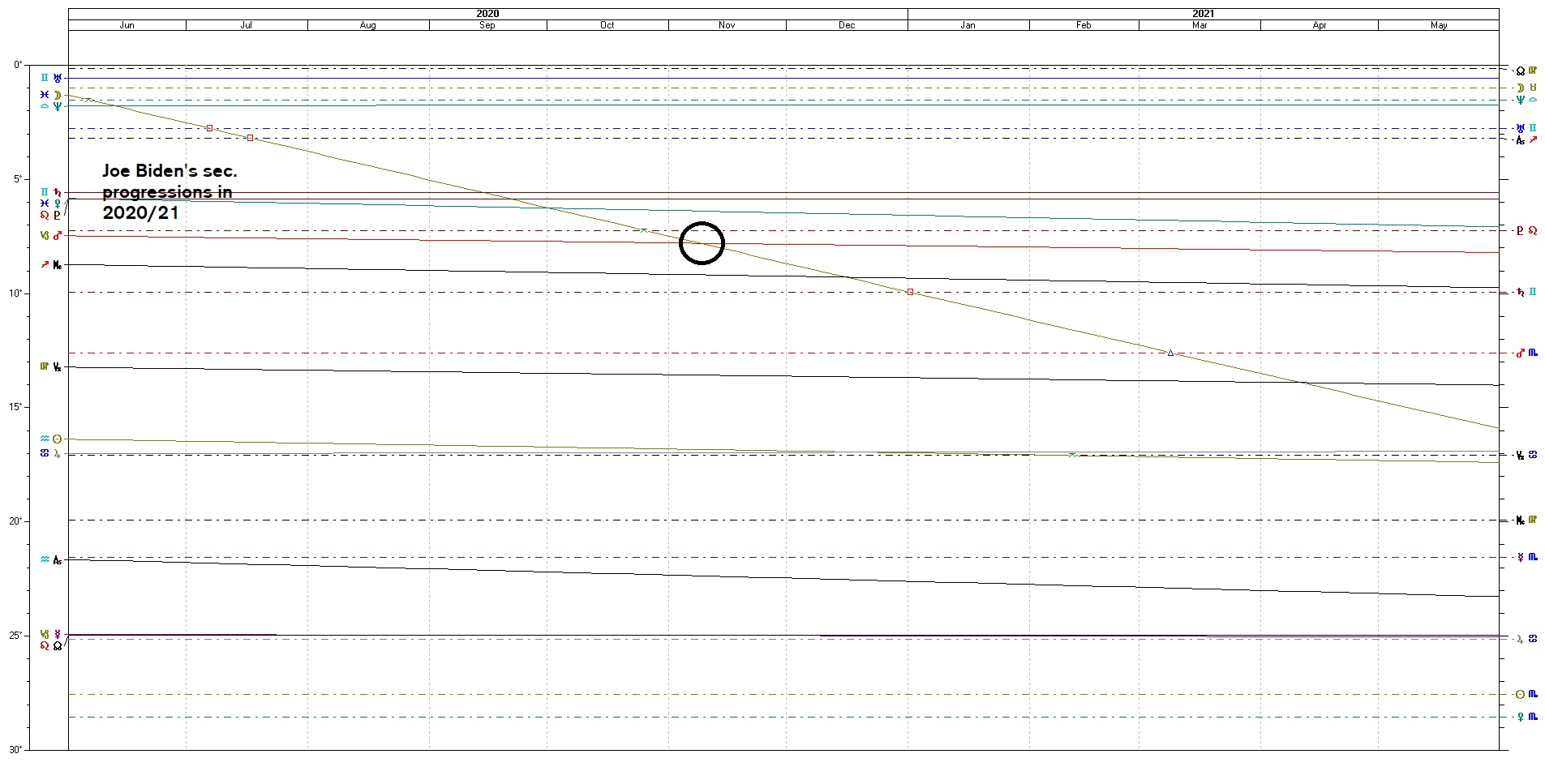 However, the most positive indication for Biden is the December solar eclipse (23°06’ Sagittarius) in his progressed 10th house (and natal 1st house), sextile to his progressed Ascendant (22° Aquarius) and in trine/sextile with the progressed nodes (24° Aquarius/Leo). A strong eclipse in the 10th house is an indicator of change in one’s career or social standing. 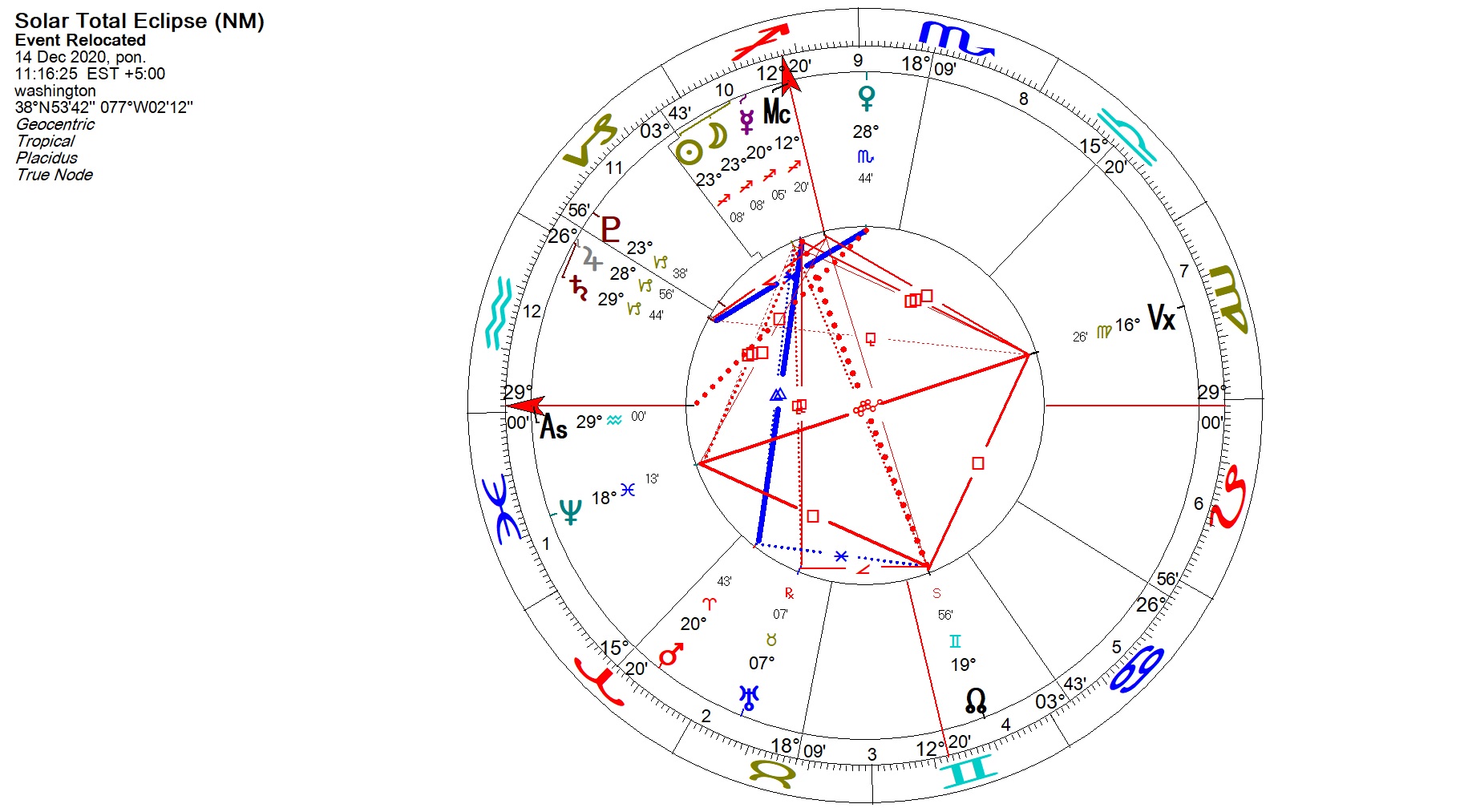 Last but not least, the Jupiter–Saturn conjunction in December at 0°29’ Aquarius will trine Biden’s 10th–house Neptune and 7th–house Uranus. The social planets in Aquarius are a strong indication of the democratic politics that Biden represents. In conclusion, I must say that I think Joe Biden will win the next U.S. Presidential election.

Bio: Ema Kurent (DFAstrolS, QHP, CMA, ISAR CAP) is a professional astrologer from Slovenia, working as a consultant, teacher, writer, researcher, and publisher. She specializes in traditional and predictive astrology. She runs Astrological Academy Stella (ISAR affiliated) and has written many books: Sonce in Luna (The Sun and the Moon, 2008); Lunin vodnik (Moon Guide, a yearly publication since 2005); Horarna astrologija (2015); Horary Astrology (2019), and nine student textbooks. She has lectured in Slovenia, England, Poland, the U.S.A., South Africa, India, and Serbia. Contact her: Ema Kurrent.com, astroakademija.si, ema.kurent@gmail.com