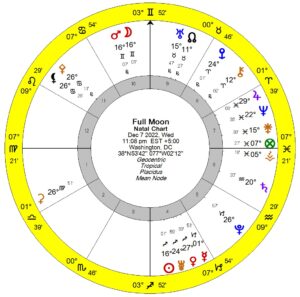 1.The Full Moon on December 7 (11:08 p.m. EST) is exceptionally dynamic as it’s conjunct Mars in Gemini. The pace of activity picks up quickly during the week leading up to the Full Moon, with many comings and goings, crowded transportation routes, countless cards to send, and attractive shopping deals to check out. People generally may seem less aware of their surroundings, which increases the chances for minor mishaps or even significant accidents. Impulsive, spontaneous actions or words may lead to regrets later; rein in the urge to be overly critical of others around this martial Full Moon. Make a to-do list to take full advantage of this hectic phase.

2. Black Moon Lilith and Pluto are in opposition throughout the month — the aspect gains strength through the 13th and then wanes over the following two weeks. For many, this dynamic can intensify power struggles within their professional environment and/or family network. Those under the influence of Lilith–Pluto may experience a surge in relentless ambition or be the victim of others’ ruthless or mentally unbalanced behavior. The positive side may be expressed as dramatic healing for those who can focus their psychic energy on a specific goal. The process may seem magical, since both Pluto and Lilith operate below (or beyond) surface appearances. Those in touch with their soul’s higher purpose have the most to gain.

3. Jupiter re-enters Aries on the 20th and zips forward until it enters Taurus on May 16, 2023. For many, Jupiter’s passage through Aries marks a new beginning when personal goals become clear and you have the energy and resources to achieve them. This may mean leaving behind a stagnant routine or relationship pattern that has been holding you back. Jupiter’s entrance into Aries gets a powerful kickstart since it’s octile (semisquare) Uranus on the 23rd. Those under the influence of this Jupiter–Uranus dynamic (from the 15th through 30th) may get sudden technological, metaphysical, financial, or personal growth insights. This one also produces a powerful urge toward independence and to move toward a better future, both personally and collectively. 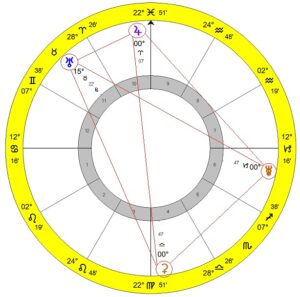 4. Ceres squares Hygeia on the 21st; these two prominent asteroids are influencing people and events from the 14th through 26th. The natural tendency for these two asteroids in aspect to each other is to promote care and concern for the health of others, especially family members or those you’re particularly close to. Ordinarily, these asteroids wouldn’t receive such focused attention, but in this case, they’re entering Libra and Capricorn respectively and are simultaneously interacting with the Jupiter–Uranus dynamic described in astro-event #3. Anyone with prominent placements at 0° of the cardinal signs (plus or minus one degree) is getting moved by this multi-planet configuration. This may manifest as major changes in health, relationships, and/or professional status. 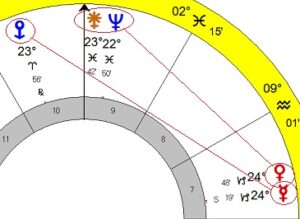 5. Mercury turns retrograde on the 29th while conjunct Venus in Capricorn, a loving, harmonious combination. During the two days leading up to this retrograde, Mercury and Venus make sensitive, empathetic sextiles to a Juno–Neptune conjunction in Pisces. These few days offer a great time to share with loved ones and reach out to those you care for. However, Mercury and Venus are also squaring Eris in Aries. The downside of this Mercury–Venus duo is that it can be rather elitist. After Mercury turns retrograde you may become more aware of those who have been left out of your most intimate circle. Or, perhaps you feel left out and need to find a new network where you can express yourself more freely and still be connected with others.