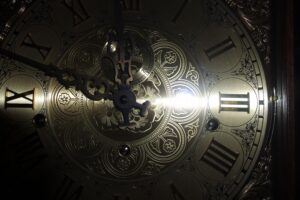 Stationary planets have long been a passion of mine. In 2014, I wrote a piece for the Mountain Astrologer on the topic of stations and since then I have continued my research. I had always planned to write a book about stations, but it wasn’t until lockdown number six in 2021 that I finally put all the material together.

The Test of Time: Exploring Stationary Planets was published earlier this year and includes a host of case histories of well-known people and events. (1) I also included a section on how to use stations for personal development. It’s my feeling that when stations occur, we should slow down and use the time to become more familiar with the energy associated with each station.

Whether stationing retrograde, or direct, planets that have no (or very little) apparent motion hover at the same zodiacal position for days, sometimes weeks. If we think of the zodiac as being a journey through time, when planets are moving retrograde, they are, in a sense, venturing back into the past before resuming forward motion once more. When they are stationary, the present moment is symbolically magnified and highlighted. Time seemingly stands still.

Most astrology software programs allow a day or so as the standard orb for stations, and stationary planets are flagged “S” accordingly. But the speed and orbital length of each planet differs, which should be considered. Using a percentage of a planet’s average daily motion is one way to do this.

Rather than use a blanket orb of a day, or several days for a station, using a percentage of a planet’s average speed to calculate stations factors in the different speeds of the planets. After a long time spent examining all the charts in my database, I decided to use 30 percent. This means that any planet moving slower than this average speed will be flagged “S.” This preference option is available in Solar Fire.

In Solar Fire, this option allows you to enter a percentage of average speed.

Because some planets have a more elliptical orbit than others, some station orbs will differ slightly from one chart to another. This is especially true for Mercury, Mars, Chiron and Pluto which have quite elliptical orbits.

Since Mars has the longest synodic cycle of 780 days, it also has the longest orb duration for its stations. Using the 30 percent rule, Mars will be flagged “S” for about three to four weeks at each station. This makes sense symbolically because Mars stations are, by definition, the most challenging. The degree of difficulty is higher for Mars because its natural inclination is full steam ahead.

In the case of Mercury, which also has an elliptical orbit, using the 30 percent rule gives you a station orb of between four and eight days.

Keep an eye out for stations and make time to engage with their theme and message. It makes sense that when planets appear to be moving very slowly, or when stationary, they provide us with an opportunity to slow down and become more familiar with their energy.

If a station connects with a planet in our chart, we are probably going to notice it, but even when a station doesn’t trigger a planet or sensitive point in our chart, it’s worth paying attention. If we make the time to engage with the transiting stationary planet, we have an opportunity to understand more about its nature. If we become more conscious of the planetary archetype in question, we might even be able to mitigate some of the difficulties of heavier planetary transits when they cross our path.

Michele Finey is an astrologer, author, and artist based in Melbourne, Australia. Since the 1980s, her articles have appeared in a range of international astrological journals and magazines. Her work includes Solar Fire’s Health and Wellbeing Report. Her first two books are Secrets of the Zodiac (2009) and The Sacred Dance of Venus and Mars (2012), available here. Her latest book, The Test of Time: Exploring Stationary Planets is available at her website www.celestialinsight.com.au, as well as all the usual online portals. Michele produces a comprehensive 32-page annual astrology calendar that can be purchased at her website. For more than 14 years, she has written a free monthly astrology newsletter INsight. Visit her website www.celestialinsight.com.au to subscribe.