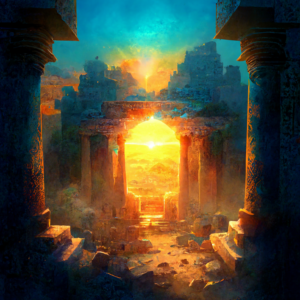 The cycle beginning with the New Moon in Capricorn opens with the stillness of the solstice. We feel a need to slow down. We’ve worked hard and now feel a need for rest. Do the holidays have to be such a rush? We want to slow down.

We’re invited to ground ourselves in this time, this place, this Earth. 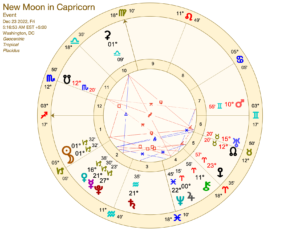 The New Moon arrives December 23 with the Sun and Moon at 01°32’ Capricorn. The mood will be sober, sedate, and serious. This brings a chill, dialing down the Sagittarian party vibe. It may also be a welcome respite, a chance to find our feet again in the holiday madness. This year’s Capricorn New Moon invites us into deep territory. Saturn, ruler of the New Moon, is strong in Aquarius. The Sun and Moon join Venus, Mercury, and Pluto in the sign of the Sea Goat. The presence of Pluto, lord of the unseen, alchemist of the soul, will be felt as each inner planet draws near.

We’re looking closely at the foundations of things as we prepare to pivot into a new year. A mythic figure who knew the importance of foundations is Merlin, the wizard, wild man of the forest, tutor to the young King Arthur, and councilor during Arthur’s reign.

We first encounter Merlin as a young boy brought to a mountainous region where Vortigern the king was building a stronghold. Its walls and towers kept collapsing, and a prophecy announced that only a sacrifice would allow it to stand. Merlin was intended to be that sacrifice. The boy arrives and announces to the king and councilors he knows what the problem is.

Merlin saw two dragons, red and white, locked in conflict in a lake beneath the castle site. These dragons represented political and cultural forces in conflict, a situation reflected in the world today.

This New Moon is also in a state of flux. The solstice signals the opening to winter (in the Northern Hemisphere) and the return of the Sun. Jupiter has just entered Aries (00°15’) and is squared by the New Moon. Chiron stations direct (11°56’ Aries) less than an hour before the New Moon.

Often, whether we consider world events or our own lives, what we uncover in the depths points us toward the remedy.

The Crescent Moon of December 26 finds the Moon (19°48’ Aquarius) conjunct Saturn (21°53’ Aquarius). The mood remains serious, but our view changes. We shift from examining deep foundations to scaling great heights. The Moon has gained light again. We make plans, look ahead, and figure out our next steps.

During this phase, we map out strategy and tactics. At the turning of the year, we are also in a time of divination, another form of long-range planning. Two events will affect this process. First, on December 28, we reach the third and final exact Pluto Return to the US Sibly chart (27°33’ Capricorn). Because Pluto moves so slowly, the impact of this return will unfold over the years to come. Yet, we may see events around this time that point to deep issues in the US. Second, on December 29, Mercury stations retrograde at 24°21’ Capricorn. Instead of moving to conjunct Pluto, Mercury turns back to meet Venus. We reexamine our approach to relationships, values, and aesthetics.

December 29 is also the First Quarter Moon in Aries, we’re ready to break new ground. The Moon (8°18’ Aries) pushes against the restraints of the Sun (8°18’ Capricorn). This Moon is ruled by and also sextiles Mars (9°24’ Gemini), which is retrograde and out of bounds. Enough waiting! It’s time to move! Now we develop new skills. We’ll be tempted to dive in fast, which brings us right into Chiron (11°57’ Aries). Chiron triggers old patterns to show where healing is needed. If you get tripped up, consider where support and care can help.

We’ll cross into 2023 during this phase, as Venus reaches conjunction with Pluto (27°39’ Capricorn). New Year’s Eve could be intense. What is said and done at this time may reverberate throughout the year to come.

On January 2, the Gibbous Moon (27°12’ Taurus) highlights what’s at stake when we enter Plutonian realms. This becomes the gibbous challenge, as the Taurus Moon says, “Wait a minute, this all feels very uncomfortable. Do we really need to change? Aren’t we fine as we are?”

The Moon trines Pluto (27°43’ Capricorn). There’s a conversation going on. We must look at the implications of not changing, even as we long for the comfort and security of the known. Meanwhile, the Sun (12°12’ Capricorn) trines Uranus (15°06’ Taurus) and the North Node (11°44’ Taurus), while it sextiles the South Node (11°44’ Scorpio). This is the Janus face of the New Year’s Sun looking backward and forward, illuminating past and future. Staying the same is not really an option.

Within this phase, on January 2, Venus will enter Aquarius, helping us see possibilities for a bright and balanced future. 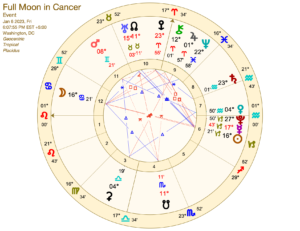 The Full Moon in Cancer arrives January 6, an important date. This is Twelfth Night, the Feast of the Three Kings and Epiphany. The root of the word “epiphany” points to the sudden appearance of bright light, fitting for a Full Moon.

In the midst of the dry cold of Capricorn, we welcome the Moon in its home sign of Cancer. This is the candle in the window on a wintry night, the promise of a warm fire and an even warmer hug, the sense of arriving at our true home. The Moon (16°21’ Cancer) opposes the Sun (16°21’ Capricorn) conjunct Mercury retrograde (17°43’ Capricorn). On the morning of January 7, still within the Full Moon phase, Mercury reaches cazimi (16°56’). This Mercury–Sun conjunction is another kind of illumination. We won’t fully understand its message for weeks yet, but we feel the light.

The Moon in Cancer is nurturing and also vulnerable. The Saturnian and Plutonian influences in the waxing cycle were upsetting. Such changes are bound to interfere with safety and stability. These times feel risky. Many throughout the world have lost homes and families to war, instability, persecution, and natural disasters. The Moon is also out of bounds, ready to call for radical approaches to care. What is the point of building grand new societies if there is no love? How do we build support for all people, especially the most vulnerable, into the foundations of a new world?

The Disseminating Moon in Virgo (5°34’) of January 10 stands ready to carry out Full Moon plans. In this phase, we share what we learned from the Full Moon. Virgo shares by getting busy. Careful planning, steady support, and checking in are Virgoan hallmarks. The Sun (20°34’) draws near to Pluto (27°58’), already within orb of the conjunction. We feel the weight of history, of the unconscious, and of chthonic forces. Somehow, the everyday support of the Virgo Moon still helps.

This phase holds an important pivot that enhances our ability to get things done: Mars stations direct on January 12, at 8°07’ Gemini. Mars is ready to reach for new goals.

The Last Quarter Moon in Libra (24°38’), arriving January 14, will try to keep things calm. The Moon squares the Sun (24°38’) and Pluto (28°06’) in Capricorn, attempting to soften the obsessive intensity of the Sun–Pluto contact. The exact conjunction will be January 18, still within this lunar phase.

But Mars is the one in the hot seat. Newly direct and still out of bounds, this Mars (8°09’ Gemini) sits at the apex of a Thor’s Hammer with the Moon and Sun–Pluto at its base. At the same time, Mars is the apex of a yod with the South Node (10°04’ Scorpio) and Mercury retrograde (9°01’ Capricorn) at its base. Both luminaries, the South Node, Mercury, and Pluto all look to Mars for answers.

Remember, Thor’s Hammer and the yod are both triangles. Thor’s Hammer is formed from two 135° aspects on either side of a square (90°). The yod has two 150° aspects on each side of a sextile (60°). These are both challenging patterns, creating an edgy, tense environment. What Mars will do is anyone’s guess. We may all be in need of the calming influence of a Moon in Libra.

A few hours before we enter the balsamic phase, Mercury stations direct at 8°08’ Capricorn. This retrograde period has been accomplished within this lunar cycle. We’ve examined our own internal structures and boundaries, and are ready to move forward.

The Balsamic Moon (13°16’ Sagittarius) of January 18 will invite us on a healing journey. The Moon separates from an opposition to the still-beleaguered Mars, offering exuberant hope.

The balsamic phase is a time of releasing what is complete, worn out, or no longer serving our best interests. A Sagittarius Moon counsels us to let go of narrow ideas, limiting beliefs, and old prejudices. Paradoxically, we let go by embracing more diversity, complexity, nuance, and flexibility.

On January 20, the Sun enters Aquarius, fully supporting the fresh outlook we’ve acquired in our journey from the Capricorn New Moon. 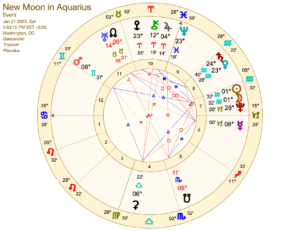 The New Moon in Aquarius (1°32’) on January 21 is a visionary. The Sun and Moon sextile Jupiter in Aries (4°14’), an infusion of energy and optimism to carry this air New Moon even higher. The Sun and Moon are just within orb of a trine to direct Mars in Gemini (8°37’). Both the Moon and Mars remain out of bounds. The challenge at this New Moon will be to remain grounded. The best way to accomplish this will be to remember all the experiences we had and the lessons we learned on the journey that began with the New Moon in Capricorn.

Editor’s note: All dates are EST.

Mary Pat Lynch is a consulting astrologer based in the mountains of western North Carolina. Her background includes psychological astrology, as well as mythic, magical, and archetypal perspectives. She publishes a blog focused on the lunar cycle, with podcast episodes for each New and Full Moon.