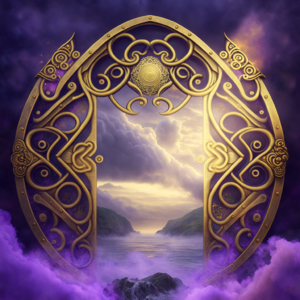 Traveling with the Moon

As we journey through each lunar cycle, we can choose to pay attention to what’s happening in our bodies and emotions. This is the Moon’s territory. We might keep notes written on charts, in files, or somewhere to personalize our experiences with this closest body to Earth, the nighttime luminary. Yet, the Moon moves so quickly that we may sometimes lose its place. Where is that Moon again? Still in the same sign? Aspecting what?

One way to stay grounded is to use our own natal Moon as a touchstone.

What is your Moon sign? How do you feel about that sign? What about your Moon’s placement? Does it seem supportive or challenging?

As the Moon travels through the sky, which signs are calming or stabilizing for you? Which are energizing? Which might be frustrating or leave you feeling drained?

This New Moon cycle from Aquarius in January to Pisces in February will bring us from the airy heights of visionary thinking to oceanic depths of visionary feeling. Keeping our own Moon in mind (and heart) will deepen our understanding. 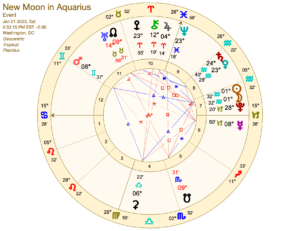 New Moon in Aquarius to Full Moon in Leo

he Aquarius New Moon of January 21 is a visionary. The Sun and Moon at 1°32’ have just left Pluto and are still within orb of an out-of-sign conjunction with the Lord of the Underworld. We’re emerging from the depths.

Venus (23°28’) moves to conjunct Saturn (24°40’) in Aquarius. Our values and aesthetics align with our need for clear, logical structures. It’s time to organize and systematize what we’ve learned.

The question is, what can we do? Mercury (8°50’ Capricorn), newly direct, forms a quincunx (150°) to Mars (8°37’ Gemini), also newly direct. Both planets are still within their retrograde shadow, sorting out where they are now.

In fact, this Mercury–Mars connection is one leg of a yod (a triangle with a sextile [60°] at its base and quincunxes on either side). The second side of the yod is Mars in Gemini and the South Node of the Moon at 9°31’ Scorpio. The planets of thinking (Mercury) and doing (Mars) are processing where they’ve been, and the past (South Node and Mercury) is very present.

The Sun and Moon apply to trine Mars and sextile Jupiter (4°14’ Aries). There is a desire to act and to shift into forward motion, but we may not feel capable — not yet. The path might feel blocked or unclear.

This New Moon emphasizes the quirky side of Aquarius. This first decan is associated with exile, moving away from the known to explore raw, new territory.

In addition, both the Moon and Mars are out of bounds. Our sense of feeling and for taking action chart their own paths, following no guidance but their own. On January 22, Uranus, the modern ruler of Aquarius, stations direct at 14°56’ Taurus. At a station, a planet remains in one place, which becomes a point of emphasis and power.

In the last lunar cycle, we shifted from the stability of Capricorn to the crystal-clear logic of Aquarius. Saturn, the ruler of Capricorn and the ancient ruler of Aquarius, forged a link between the cycles. We moved away from what we built on the ground and toward what we saw for the future.

Deb Houlding, in her essay on Aquarius names this “… the forgotten ‘water sign’, with its name simply meaning ‘related to water’ …” Yet this water, flowing from a vessel controlled by its bearer, “seeks only to cleanse, illuminate and purify.” (1)

The Crescent Moon of January 24 acts as a herald. This Moon at 19°48’ Pisces moves to conjunct Neptune at 23°23’ Pisces. As we seek to clarify our goals for this cycle, we find ourselves in a misty landscape. Our ideas are fluid.

On January 28, the First Quarter Moon in Taurus (8°25’) is conjoined the North Node and with the Sun forms a t-square with the nodes of the Moon (8°49’). These are partile aspects in fixed signs. The Moon allied with the North Node emphasizes the slow, steady creation of the future. The Aquarian Sun assesses whether all is proceeding according to the grand plan. The South Node in Scorpio guards its secrets.

On January 30, Saturn sets in the western sky, preparing for conjunction with the Sun on February 16. This disappearance signals Saturn’s waning strength. After six years with Saturn in signs of power, it enters Pisces on March 7, during the next lunar cycle.

On February 1, the Gibbous Moon in late Gemini (27°28’) brings an unexpected challenge. Imagine we’re walking confidently on our path to the Full Moon, focused on our goal when, suddenly, we find ourselves at a crossroads. Many choices lie before us.

The Moon separates from a square to Neptune and a trine to Saturn. Do we follow our intuition or take the tried and true path? If we choose poorly, the consequences may lead us astray. 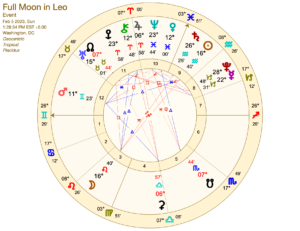 Full Moon in Leo to New Moon in Pisces

The Full Moon in Leo on February 5 brings the strength of purpose and a celebration of personal creative expression. The Sun at 16°40’ Aquarius wants to focus on long-term goals to benefit the community, but the Moon at 16°40’ Leo longs to take the lead and dive into passionate play.

The luminaries separate from squares to Uranus (15°01’ Taurus) and apply to an opposition (Moon) and conjunction (Sun) with Saturn (26°25’ Aquarius). If we see this as one more nod to the definitely, past-its-prime Saturn–Uranus square, this feels like a win for Uranus.

Saturn is invisible, under the beams of the Sun, while Uranus is direct and starting to move. Certainly, a Leo Full Moon will champion personal authenticity and the right to express ourselves over traditional Saturnian values of hard work, patience, and responsibility.

As we move toward the dreams of a New Moon in Pisces, we’re reminded that our own inspirations are vital and that collective dreams are expressed through individual creative work.

The disseminating Moon of February 9 invites us to speak diplomatically and charmingly on deep topics. The Moon at 5°47’ Libra moves to conjunct the fierce maternal energy of Ceres (6°50’ Libra) and oppose Jupiter (7°46’ Aries) while sesquiquadrate (135°) the Sun.

In this phase, we share what we learned during the illumination of the Full Moon. Throughout these days, the depth and intensity we share are reflected in Mercury’s path. On February 10, Mercury conjuncts Pluto at 28°58’ Capricorn and receives a deep initiation into the foundations of life. On February 11, Mercury steps into the light and clarity of Aquarius. Now we can speak with confidence.

On February 15, Venus reaches conjunction with Neptune at 24°04’ Pisces. Values and creative desires align with intuition and the world of dreams. February 16, Saturn reaches the throne room of the Sun, the cazimiat 27°44’ Aquarius. Wisdom is gained but held within — not to be shared until Saturn becomes visible in the sky.

The Last Quarter Moon phase can be a time when we reach out to grasp goals set for the lunar cycle, yet now we may feel more contemplative instead. We’re invited to explore our relationship, not only to our own dreams, but to the dreams of the cosmos.

The Balsamic Moon of February 16 brings us back to earth. It is a time of winnowing. We’re choosing what to keep and what to release.

The Moon at 13°08’ Capricorn asks very pragmatic questions. Which dreams are real — and what does that question actually mean? Must dreams lead to concrete, actionable steps? Must they manifest in physically apparent ways? Are dreams that inspire, uplift, and sustain also real?

This reality principle is strengthened by Saturn’s presence conjunct the Sun. The Old Devil may be combust but is still a force to be reckoned with. Yet, this Moon has slipped out of bounds. Yes, Capricornian reality will ask some hard questions, but in the end, our choices will be our own.

The Moon also forms a partile square to Chiron, the Wounded Healer. Chiron at 13°16’ Aries knows what needs to be cut away and where we need to separate to heal. The Moon’s waning square to Jupiter (9°16’ Aries) gives us the confidence to proceed with that process.

On February 18, the Sun enters Pisces. Our star leaves the crystal clarity of the sky gods to dive into the oceanic depths of the Great Mother. Our zodiac links this sign of the fish to a male god, yet across the cultures of the world, many ocean deities are goddesses, invoking the archetype of the mother.

Here on Earth, the oceans are the matrix of life — 70 percent of our planet’s surface is water. Deep or shallow; salt, brackish, or fresh; waters are fertile places where life originates, develops, evolves, and grows. And our bodies are about 60 percent water and answer to the tides of the Moon — as much as any ocean. 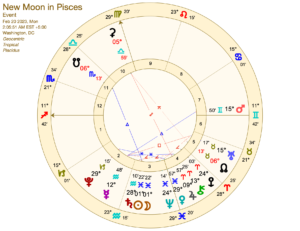 On February 20, the New Moon in Pisces (1°22’) arrives. The Moon, no longer out of bounds, swims alongside the Sun. Here, the structures of the world we’ve known begin to dissolve.

Sun and Moon are separating from their conjunctions to Saturn, now left behind in Aquarius.  Saturn rules this first decan of Pisces, offering a link to structure, even as we experience ourselves in a fluid environment that makes staying grounded, even staying in one place, problematic.

The only other aspects the Sun and Moon make at the New Moon are applications to the nodes. The applying trines to the South Node of the Moon (6°13’) return us to the past, our personal history, our lineages, and the matrix of our being. At this New Moon in Pisces, we return to the place we came from, the cosmic ocean.

T.S. Eliot describes this Piscean place in the final stanzas of “Little Gidding,” the final poem of Four Quartets. (3) He speaks of stepping through the “unknown, unremembered gate” where:

We shall not cease from exploration

And the end of all our exploring

Will be to arrive where we started

And know the place for the first time.

This is where we find ourselves at this New Moon in Pisces, the final sign of the zodiac, where we return to the primordial waters of our origin.

(2) Wikipedia: Gates of horn and ivory

Editor’s note: All dates are EST.

Mary Pat Lynch is a consulting astrologer based in the mountains of western North Carolina. Her background includes psychological astrology, as well as mythic, magical, and archetypal perspectives. She publishes a blog focused on the lunar cycle, with podcast episodes for each New and Full Moon.