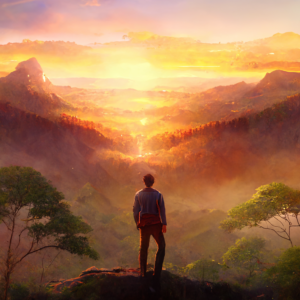 Moon-Watching
The Moon, luminary of the night and messenger of the zodiac, holds our body and our emotions. Of all the planetary bodies, we often have the best sense of where the Moon is, watching the changes from New to Full to New again.

The cycle beginning with the New Moon in Sagittarius is enlivening, bringing a breath of fresh air and surge of energy as we leave behind the intensity of eclipse season.

We’re ready to move. What will we find?

Out of Bounds
An interesting feature of this lunar cycle is the number of planets out of bounds. The Sun establishes boundaries at 23°27’ north and south of the equator, its maximum declinations at the summer and winter solstices. When planets slip past that limit, they’re out of bounds in every sense of the phrase.

Mars, whose retrograde status already pushes limits, is out of bounds before the Sagittarius New Moon and remains there throughout this cycle. This Mars is an outlaw, maybe Robin Hood, Wild West, or a gangster, but clearly off the rails.

Mercury, Venus, and the Moon move out of bounds as the lunar cycle advances. Our perceptions, mental processing, and communication (Mercury); relationships, aesthetics, values (Venus); and emotions and sensations (Moon) will be unusual.

The artist Björk offers a point of reference. With Mercury, Venus, and Mars all out of bounds in her birth chart, her approach to life and art are clearly outside the conventional. She is, unapologetically, who she is. (1) 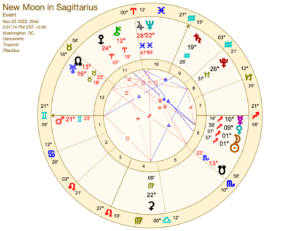 New Moon to Full Moon
On November 23, the New Moon in Sagittarius opens up fresh vistas. This is a nomad Moon, lifting our hearts with an invitation to journey. This year’s eclipse chaos changed our world. It’s time to explore.

The Sun and Moon meet at 1°37’ Sagittarius with Venus and Mercury nearby, our band of explorers. The New Moon is dark. We gather provisions but do not set out yet.

Jupiter offers an out-of-sign trine from 28°47’ Pisces and stations direct a few minutes after the exact New Moon, but there are no other aspects to the lunation. The New Moon is free to roam, supported by an expansive Jupiter.

Nomads are not aimless wanderers. They tend sacred landscapes and visit magical places to conduct ceremony and reconnect to the land. Think of the Aboriginal songlines, or ancient Irish lore which includes the dindsenchas, poems and story fragments linked to standing stones, passage tombs, mountain peaks, and other features of the landscape.

What sacred land lies before us? How will we connect to inner landscapes unfolding in new ways?

The Crescent Moon in Capricorn on November 27 draws us into the depths. In this phase, we watch the Moon grow brighter in the night sky. Our path becomes clear. This time, it leads us down and inward.

The Moon conjunct Pluto trines Ceres and sextiles Neptune and Jupiter, a pattern that grows stronger until the Full Moon. I am intrigued whenever Ceres (Demeter) aspects Pluto (Hades). We enter the underworld. There is wisdom and mystery to be uncovered and claimed.

The First Quarter Moon at 8°21’ Pisces on November 30 offers a vital mythic perspective. Many planets are now in fire or water signs, elements considered incompatible in classic Hellenistic thought. The ancient Indo-Europeans had a different view.

In Indian and Celtic myth, we find a motif called “Fire in Water.” This theme, reflected in varied tales, points to water that has within it the fire of healing and creative inspiration. The Pisces Moon squares the Sagittarian Sun. Mars, a fiery planet, opposes Venus and Mercury in Sagittarius. Neptune at 22°38’ Pisces stations direct on December 3. Water begins to flow once more.

The First Quarter is a time for building new skills. Sometimes, we must go deep within to reach a new spark of creative life. Perhaps the waters of spirit and emotion offer us fresh inspiration.

On December 4, the Gibbous Moon in Aries sets the final challenge before the Full Moon. The Moon conjunct Eris reminds us our world is on fire, not always in good ways. The Moon is sesquiquadrate (145°) to the Sun and trines Venus and Mercury.

Ceres in Virgo squares Mercury and Venus in Sagittarius, and is opposite to Neptune and Jupiter in Pisces, forming a mutable t-square, also lighting things up. Fire brings abundant energy, but becomes dangerous when out of control. We could slip into overwhelm, throw our hands up, and say it’s all too much. Instead, let’s do the thing we thought we could never do.

Have you been to a firewalk? A large fire is carefully tended to burn down to glowing coals. The coals are spread in a path. Anyone who chooses can walk across the hot coals barefoot. This sounds crazy, right? But the experience is mind-opening. It’s out of bounds. What is your firewalk? 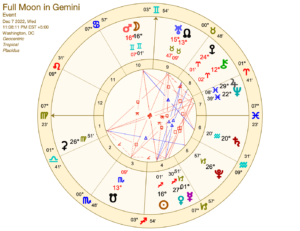 The Full Moon in Gemini on December 7 is, well, edgy.

The Moon at 16° Gemini is tightly conjunct retrograde Mars, inescapably illuminating the red planet. How we react to Mars retrograde depends on where Gemini is in our birth chart, so it’s good to check in with how we manage our own Mars. The Full Moon will exactly illuminate these matters.

Gemini loves to talk. A lot. This can be clever, creative, and fun, or pointed and sarcastic. Mars loves forward, direct movement, and when retrograde, Mars tends to lean negative. Going backward is not its style.

On December 6, just before the Full Moon, Mercury enters Capricorn. Venus enters Capricorn on December 9. A stabilizing trine from the Moon to Saturn might hold some excesses in check, but the Moon, Mars, Venus, and Mercury are all out of bounds. All bets are off.

We’ll see how we’re doing with speaking and listening, kindness and sarcasm, and managing or giving in to impulses. We’re in for an interesting time.

Full Moon to New Moon
After the Full Moon, the Disseminating Moon in Leo on December 12 definitely wants to share, but things could be volatile. The Moon is a focal point for difficult aspects: a square to the nodes of the Moon and a Thor’s Hammer with the Sun and Neptune. Moon square the nodes brings our attention to where we are on our path from past to future; how we feel about issues of fate and free will may come up.

The Thor’s Hammer is a challenging triangle in which the planet at the apex (the Moon) forms sesquiqadrates (135°) to two planets across the base (the Sun and Neptune) that square each other. The hard aspects in this pattern bring up willful, rebellious feelings, or invite criticism from others.

We feel we have important things to say, but no one is listening. How do we cope when our voice is not well-received? When others say things that trigger us?

The Last Quarter Moon at 24°21’ Virgo on December 16 invites us back to the underworld. The Moon is conjunct Ceres, and both trine Pluto and oppose Neptune and Jupiter. Ceres is poised at 29° Virgo, the anaretic degree. This nurturing goddess is acutely aware that decay and loss are part of life.

If we view this as a rite of passage, where are we? The Last Quarter Moon is a productive time for action. Our task this time is to prepare for transition. The eclipses separated us from our old selves and dropped us into a new place. We now find ourselves at the threshold. Old ways of thinking and relating no longer fit.

Just before we enter the Balsamic time of release, Ceres enters Libra. It’s time to open our minds to new perspectives.

The Balsamic Moon in Scorpio arrives on December 19. The Moon, conjunct the South Node is forming a yod by making inconjunct aspects (150°) to Mars (11° Gemini) and Chiron (11° Aries), sextile each other. We feel wary of change. Mars and Chiron offer new ideas and healing, yet we may resist both.

The solution lies opposite the apex of the yod where we find Uranus and the North Node. Facing into the future and embracing change are our Balsamic tasks.

The winter solstice arrives on December 21 as the Sun enters Capricorn. We reach a hinge of the year.

The day before, Jupiter moved from Pisces into Aries, another big change. Jupiter squares the Sun at this solstice, enlivening and energizing. Capricorn is a builder. We look forward to building fresh structures with new hope.

The Sun at its southern limit makes it easier for the inner planets to slip out of bounds. Again the Moon, Mercury, Venus, and Mars are outside the limits of convention. An abundance of new ideas becomes available.

The New Moon on December 23 is at 1°32’ Capricorn with the square to Jupiter still in play. The ranks of Capricorn have swelled. The Sun, Moon, Venus, and Mercury have all entered Saturn’s domain.

We are invited to embody our new selves. The final stage of a rite of passage is being welcomed back into our communities. We’re coming home to ourselves in a new, grounded way.

It’s good to remember Capricorn is an earth sign, therefore feminine or yin. We meet the old woman of winter, the Cailleach of Celtic lands. She is strong, a creator of mountains. She is lusty as well, ready to enjoy life to the full as we prepare to enjoy the winter holidays.

Mary Pat Lynch is a consulting astrologer based in the mountains of western North Carolina. Her background includes psychological astrology, as well as mythic, magical and archetypal perspectives. She publishes a blog focused on the lunar cycle, with podcast episodes for each New and Full Moon.