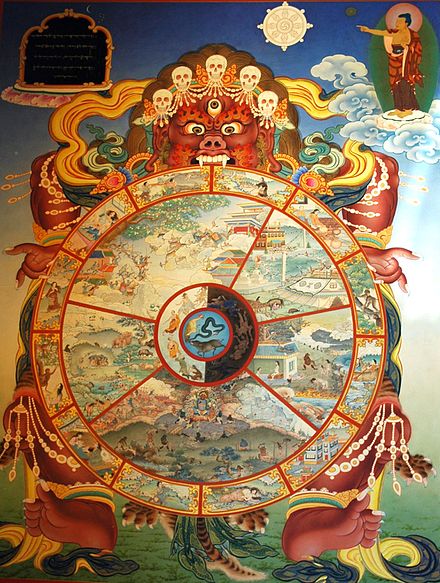 As we all know, the first of three exact Saturn-Uranus squares was on February 17th, the last is December 23rd. These planetary archetypes are in a necessary and destined clash with one another throughout the year, defining the outlines for the astrological story of 2021.

The study of their cycles, with their mundane and personal implications, is continuing to be elegantly covered by many writers. I link to some of those below.

For now, I’ve been thinking more subjectively about Saturn as the force of habit and familiarity wherein what we are comfortable with offers a sense of security. Uranus is the impulse towards something completely new, to what we have not experienced before.

Tibetan and Indian Buddhist masters speak of the “wheel of cyclic existence” wherein we remain entangled in ever-recurring cycles in the realms of samsara (essentially, the realms of suffering). We can titrate (and simplify) this intricate cosmological idea into a modern psychological framework with the notion of “conditioned existence.”

Yesterday, my toaster oven showed me something. For context: the current Aquarius planets are in my 4th house and I have had a series of problems on the home front. Mercury’s retrograde brought an excess of the usual communications breakdowns — the landline needed tweaking; the Mac keyboard started sticking (fixed with the temporary hack of blowing hard on the upside-down-keyboard and pounding the truculent keys); I lost (and found) important legal documents, etc. As befits the air element, I have also had a new urgency to circulate (i.e., air) stuff in the garage, and both the dryer vent and the heating vent have needed to be serviced.

Therefore, the immediate and obvious backdrop for me of the Saturn-Uranus square has been my dwelling. I have, in fact, taken (usually humorously) to wondering what might go wrong in the house today.

Last evening, my reliable old (Saturn) toaster oven would not heat. In a nod to my total dependence on morning toast, within a few seconds, among the other countless streams of thought, I imagined which local store I could immediately go to to replace it. And, in the next half-second, I remembered the electric switch (is it called a circuit breaker?) on the wall. I flipped the switch and voilà, the toaster works.

I saw how quickly, how immediately, mental habits overtake me. Buddhist teacher Khyentse Norbu has spoken of the “ring of fire” in conditioned existence, how quickly the mind moves around and around in habitual patterns, we are entangled without even realizing it. When we begin to notice those patterns, we begin to break patterns and have a bit of respite (even for a nano-second) from the entanglement of our habitual thoughts and patterns.

I’m thinking about the electric switch that woke up my toaster as a metaphor for Uranus’s ability to re-charge, re-set and enliven where things have come stuck. And how quickly the mind goes from open to closed, or from openness to rigor, and back again, and back again. There is something about the quickly, intensely unsettling nature of the time that may be a gift.

I see a parallel here (and a possible remediation) to the ongoing internal experience of anxiety that many are experiencing — this perpetual feeling of our culture, our livelihoods, our known reality,  our sense of safety — being on thin ice. A not-so-subtle reckoning concurrent with the Saturn-Uranus square is the huge increase in mental health conditions, anxiety disorders and substance issues arising globally.

Not to be glib, or to discount the urgent societal needs of our time, but, maybe there is something about flipping the switch for an immediate moment of relief and spaciousness, and a needed re-set?

Here are some astrological writers and thinkers on this pressing theme of our time.

Saturn square Uranus 2021 – the Clash of the Titan is from The Soul Medic. “The clash of these 2 titans can produce extreme tension and crisis in our society and impact our lives as individuals either directly or indirectly. Both Taurus and Aquarius are fixed signs. They don’t rush like Cardinal signs do (to quickly move to the next exciting thing, if their efforts don’t pay off immediately), nor adapt to circumstances like mutable signs do. They DO the work, no matter how long it takes. The changes the Saturn-Uranus square will bring will be long-lasting and will impact our society – and us, individuals in a profound way.”

This essay ends with a link to a one-hour You Tube meditation, Find Your Life Purpose with the Saturn Frequency (147.85 Hz).

Insight Astrology is “a free-form anarchist collective made up of people just like you rebels, activists, visionaries, eccentrics, the kinky and the queer. It’s a place to embrace your unique blueprint and use it consciously to live a more empowered life.”

Here is a quote from Saturn square Uranus: old structures succumb to a new vision: “Rebellion against authority is the key theme of Saturn square Uranus and we can see its influence already in the recent riots in the Netherlands against COVID-19 curfews, protest against new abortion laws in Poland, ongoing resistance in Hong Kong against Chinese government crackdowns, as well as recent protests in Nairobi, Manila, Cape Town and Guadalajara, among others.”

Saturn square Uranus: 2021- 2022, by Wendy Guy at Evolving Door Astrology has a handy graphic table which includes the retrogrades of the two planets with their partile squares. She writes: “The Saturn-Uranus square is a long-term process of working with these opposing needs and desires to establish a workable balance. It may take some creative problem-solving to ensure that one side doesn’t get what it wants at the expense of the other.

Ideally, what is called for is a sophisticated peace that requires a negotiated solution that brings together the best of both dynamics. However, with both planets having such different agendas and values, it may feel more like you’re trying to force together the same poles of two magnets. They don’t cooperate easily—and sometimes not willingly—and yet combining these conflicting energies can generate a powerful incentive to become more than what we are.”

Brian Clark’s essay, The Saturn Uranus Cycle: in consideration of its 2021 series of waning squares, includes his evocative telling of the mythology of the conjunction: “Both Uranus (Ouranus) and Saturn (Cronus) are sons of Gaia. Parthenogenically Gaia gives birth to Uranus, who then mates with her to father the twelve Titans, the youngest being Saturn. In this complex and primal family system, Saturn is both the brother and the son of his father. The original Oedipal triangle enmeshes Saturn and Uranus in the triangular web with Gaia, the great mother Earth.”

Further he writes: “Both the old and new rulers of Aquarius are at right angles, evoking an image that these two landlords need to rewrite the lease on their Aquarian homeplace in order to assure democratic and egalitarian rights.”

A downloadable pdf, Brian’s article covers the start of the current cycle (in 1988 with the  Saturn-Uranus conjunction in late Sagittarius) with tables showing the dates and zodiacal degrees in its 44-year cycle, and a succinct table with key themes for easy reference.

Be well, stay safe and have a good week, everyone.