We’ve all seen the videos from January 6, 2021 of a violent mob threatening to harm members of Congress (including the US Vice President). This serious attack on our democracy makes the Solar Return of the United States especially relevant. Where are we going as a country in the next year? A Solar Return is a chart cast for the exact time the Sun returns to a person (or country’s) birth Sun in any given year. A popular astrological tool for looking at upcoming cycles, the Solar Return shows the trends and conditions the native must navigate for the coming year. (1)

The Solar Return for the USA took place on July 4, 2021 at 10:51 p.m., Washington, D.C. We’ll begin with the conditions of the Sun: the Sun in Cancer makes an exact (easy) sextile (60º) to Uranus in Taurus indicating that the US has absorbed (and is still dealing with) a state of shock. The Sun also makes an inconjunct (150º) to Saturn retrograde in Aquarius, thereby linking the Sun to the iconic and powerful aspect of 2021, the Uranus/Saturn square. Although there are paths to innovation, there is simultaneous struggle, blockage and fear of losing freedoms or ways of being in life that are familiar. There is resistance to change even though it is necessary. Resistant factions in society and ideological struggles make change more difficult. 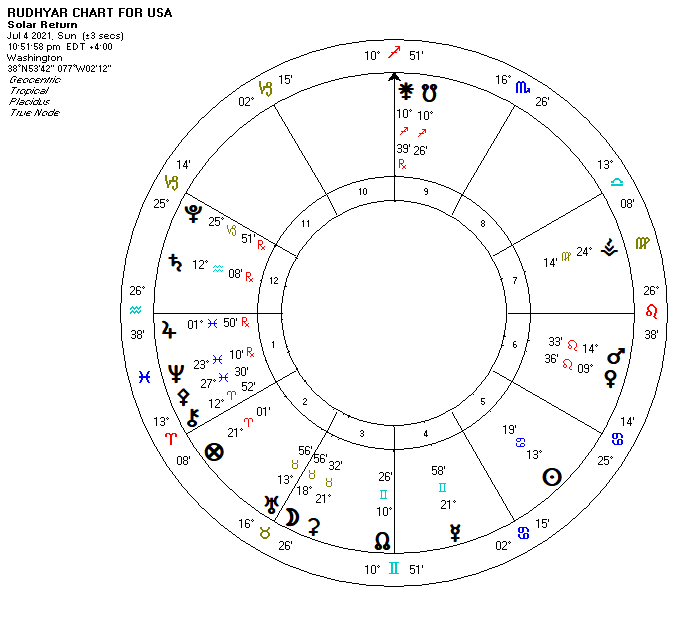 The Moon in Taurus sits close to Uranus — the Moon is exalted in Taurus, a favorable  and generous placement, offering steadiness. There is opportunity to regain stability and security or, we might say there is a strong emotional (Moon) need for security and stability for the coming year as the Solar Return Moon disposes of the Cancer Sun and sextiles (60º) it as well. The exalted Taurus Moon indicates that economic and financial stability is likely to strengthen over the next year, but with some hard ups and downs due to its close contact with Uranus, the natural disrupter of existing patterns. We need to dig deeper and consider other connections to this pattern. Most critical is that the Moon is not only next to Uranus in Taurus but it also hooks into the square to Saturn in Aquarius, the aspect we’ve discussed before as the most powerful marker of 2021. Although there is a positive signal for recovery, the Moon’s connection to this square still shows distress and instability. Unless this instability is addressed the fortunate aspects cannot function optimally. The Moon makes a flowing, easy connection to Pluto retrograde in Capricorn. Big business is thriving and this inequity is readily apparent in the larger picture of the other aspects described. The Moon makes an easy aspect to Neptune retrograde in Pisces showing the opportunity to find the practical means to relieve or alleviate anxiety and chaos.

The ruler of the Aquarius Ascendant is Saturn (traditional) and Uranus (modern), emphasizing once more the key square aspect of 2021. Jupiter in Pisces conjoins the Ascendant but out of sign and retrograde, expressing both optimism but also exaggeration of symptoms dealing with the health of the country including, physical, emotional and spiritual wellbeing. We are exhausted and trying to regain our footing. Jupiter retrograde in Pisces conjunct the Solar Return Aquarius Ascendant offers some optimism, but being retrograde can mean that we are not finished dealing with health anxieties and finding our way through a once in a lifetime pandemic. It suggests too, that this year is one where we must come to terms with the confusions that are outright lies, or else we will be overwhelmed and overtaken by them.

Mercury is strong in its home sign of Gemini but makes a hard square to Neptune in Pisces and a stressful aspect to Pluto retrograde in Capricorn. Mentally we are still in the grips of tremendous misinformation with many people embracing lies, propaganda and innumerable conspiracy theories. These dangerous elements have infiltrated Congress, our elected leaders, and continue to endanger our democratic principles.

Venus and Mars in Leo in the 6th house are also involved with the dynamic configuration we’ve been discussing — both square the Moon/Uranus in Taurus and oppose Saturn retrograde in Aquarius. Things get more even more complicated. Now we have a 3-legged pattern in fixed signs: Taurus, Leo, Aquarius, with the balance point or outlet in Scorpio (no planets there). The open space often functions as a release of the energy and an antidote to the strain of the triangular pattern. The Scorpio arena of life in the Solar Return is the 8th/9th houses. Essentially, there is continued danger of violence, death, and also transformation, issues of power, politics and control. One fact is that over the Fourth of July holiday weekend there were 400 shootings, 150 people were fatally shot, and many others wounded. This fixed sign configuration points to values deeply held and stubborn adherence to ideals with the equally strong pressure to change. Bottom line, there is still much tension stemming from income inequality and stresses of the past year as well as the revolutionary elements that want to break our democracy and create what? Change is needed in many systems of our society and the critical fault lines of the United States that have been ignored for far too long are demanding to be addressed. A terrible metaphor for these aspects is the recent collapse of the Florida condo, killing over 100 residents. Strains and stresses to this building were ignored over and over again until it finally gave way. In Philadelphia, PA on July 3rd hundreds of white supremacists marched, chanting, “The election was stolen,” and “Reclaim America.” A frightening event and something we have not seen since Charlottesville, Virginia, when white supremacists were called “very good people,” by the former President of the United States.

The most occupied houses are the Mutable ones — 12, 3, 6 and 9 — indicating trial and error, distractions, distortions, information overload with a concurrent and desperate need to discriminate and sort through misinformation. “Separating the wheat from the chaff,” becomes ever more important. Houses 6 and 12 contain the opposition part of the T-square between Mars/Venus in Leo opposite Saturn retrograde in Aquarius. These houses represent the axis of health — body, mind and spirit. Mars, the action, is located in the 6th house and Saturn, the achievement challenge, is located in the 12th. These two houses, somewhat behind the scenes, and behind/beneath the horizon line of the chart are more potent that we might realize. If the matters of these houses are not dealt with, true and equitable relationships cannot function. It’s said that “The devil’s in the details,” and if the ordinary details, rhythms, schedules and meaningful work are ill-functioning, we cannot find our true balance and cooperative spirit.

A complete Solar Return evaluation includes putting the natal chart around the SR to see the major contacts between them. The most outstanding aspect is that the SR Ascendant is nearly conjunct the USA Moon in Aquarius. The ideals that were written in our Constitution so long ago are being severely tested this year. The SR Ascendant emphasizes the USA’s birth Moon, which rules the Cancer Sun. We must all ask, what is the truth and are we willing to stand for the truth or are we rather willing to tolerate lies and compromising integrity to gain power, control and position. This struggle continues throughout the next year as the country seeks to identify and remember or reinforce its emotional foundation. The Solar Return MC conjuncts the USA Ascendant magnifying our identity as a country and focusing on the ideals we supposedly espouse. Of course, there are many more aspects that can be seen between the two charts in a double wheel format, and many indications of a critical year ahead. 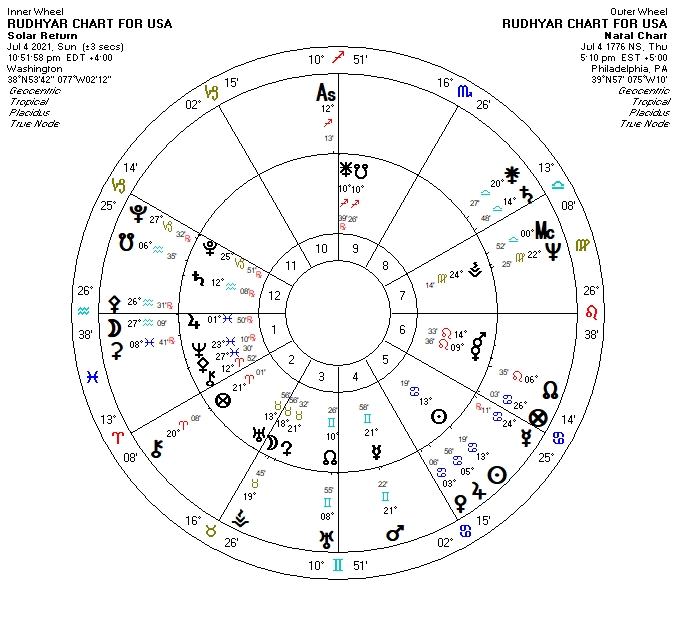 In February, 2022 the US gets its first exact Pluto return to 27º Capricorn. A Pluto return, or its full revolution of all the signs back to its birth position takes 248 years and is only possible for a nation. Astrologers have been talking about this event for years. We’ve seen the signs of decay for many years now (Pluto moves slowly, relentlessly revealing decay and pollution in systems) and the exact return makes its first contact early next year. Examining, understanding and finding remedy of all the roots of our problems is critical, or else we cannot transform. We must transform, defend the values that protect all citizens, or democracy will surely die. 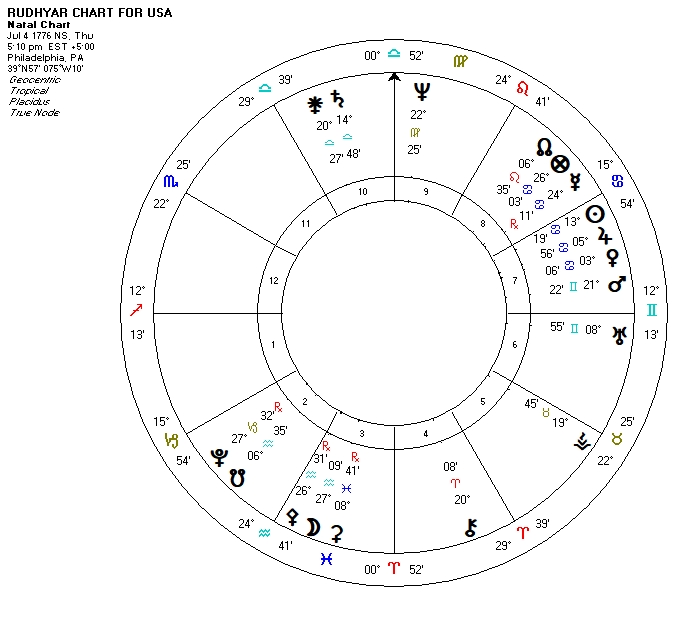 Bio: Dorothy Oja is a certified career astrologer (ISAR C.A.P.), her studies span 40+ years. She services an international clientele, lectures, writes and teaches. Dorothy’s specialties are: Elections for Surgery, Relationship Compatibility (Davison Chart) and Children’s Profiles. She serves on the faculty of the International Academy of Astrology online, www.astrocollege.org teaching several 9-week courses each year. She founded The Relationship Club which hosts astrologers who lecture on various topics pertaining to relationship astrology.  Her first book is Planetary Resonance: Everything Leaves a Trace. She has also authored two computer reports: Compatibility & Conflict for Romantic Relationships and Friendship and Business, (Cosmic Patterns Software). Dorothy has written and published a monthly newsmagazine, PlanetWeather for 23 years which includes social and cultural commentary. Her Facebook daily (almost) blog page is www.facebook.com/PlanetWeatherNews.  She’s served the astrological community as AFAN’s Chair of Legal Information and spent 16 years as ISAR Board member as Chair of Ethics and developing its Ethics Awareness Training program.  Dorothy is writing a book on the Davison Relationship Chart. Contact her at: DOja07@gmail.com