On July 20, after he landed his spacecraft Jeff Bezos announced two massive gifts: $100 million each to Van Jones and José Andrés. I’m curious, of course, to look at what these two individuals may have in common that made their particular stars align in such a dramatic way?

I have a few initial thoughts, drawn from various techniques.

Also, we have a birth time for Jones, but only the date for Andrés, so please keep in mind that all comments are based on Jones’s natal, but a solar (i.e., sunrise) chart for the chef. I am also using Whole sign houses for both. 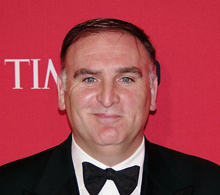 Van Jones was born on September 20, 1968 and José Andrés less than a year later — July 1969. Using profections from the Ascendant, both men are 52 which is a 5th house year. It’s kind of funny that this 5th house emphasis for both is in place only between Andres’s July 13th birthday (when he turned 52) until Jones’s September 20th birthday, when he turns 53. 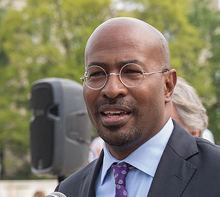 The fifth house is trine the first; it is fortuitous and can reflect gifts, general happiness, pleasant things, creativity and enjoyment. With Aries on the Ascendant, Leo is on the 5th for Jones and Mars in placed there at 29º Leo, the mighty star, Regulus. On July 20, the day of the gift, transiting Venus and Mars were at 24º – 28º Leo.

When considering solar houses, Andrés has Scorpio on the 5th ruled by Mars. Mars has just past the conjunction with Venus at 19º48’ Leo on July 13th, his 52nd birthday! What a nice birthday gift to the much admired gentleman.

(The timing of this gift makes me think the upcoming Venus/Mars conjunctions — on February 16, 2022 at 17º Capricorn and March 6, 2022 at 1º Aquarius — will be significant markers in the distribution of the funds, and how their projects are developing. Of particular interest is the 1º Aquarius conjunction as that triggers the Jupiter/Saturn epoch-changing conjunction from December 21, 2020 with its emphasis on equitable distribution of wealth, social justice, etc.)

Something that connects the two gentlemen: both are born in the Balsamic Moon phase, the dark of the Moon, before the New Moon. There was a New Moon at 29º29’ Virgo (conjunct Uranus) about 18 hours after Jones was born. The Moon was in Cancer the entire day on July 13, 1969 when Andres was born; the New Moon was at 21º56’ Cancer the next day.

Van Jones is Sun and Moon in Virgo, disposed by Mercury in Libra (conjunct Venus on Spica). The $100 million award is for “Courage and Civility.”

José Andrés, founder of World Central Kitchen, has the Sun and Moon in Cancer. He also has Mercury and Vesta (What are we devoted too? What are we working for?) in Cancer — quite a strong signature for the man whose passion is to feed people all over the world. In an interview after the announcement, he said: “We need to build longer tables not higher walls.”

Both have Jupiter in careful Virgo. Jupiter, about to retrograde back into Aquarius, is now calling out from across the zodiac from his home sign — very favorable Pisces: Go big, gentlemen!