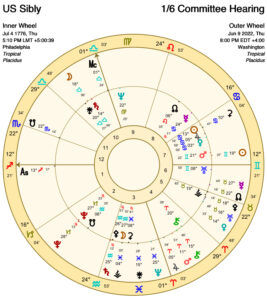 After eight public hearings, lasting over two hours each, the select committee of the US House of Representatives has not yet completed its work or its final report. The committee is taking a break for August and resumes public hearings in September. The eighth hearing, aired July 21, 2022, in prime time, laid out the 187 minutes during which the US Capitol — and the police valiantly defending it — were brutally attacked by a mob that was, according to first-hand testimony, incited, condoned, and supported by former President Trump. The committee provided evidence from many sources, including people who were in the White House or in touch with White House officials during that unprecedented time. As events unfolded at the Capitol, then-President Trump sat in the West Wing dining room and watched on TV as the mob destroyed property and brutalized police. Trump refused to call the National Guard or other law enforcement to quell the riot or to tell his supporters to stop. Many police officers were beaten and severely injured, and some died as a result. Congress members were put in harm’s way and a gallows with a noose was erected in front of the US Capitol for Vice President Mike Pence. Pence was made a target by his own president when Trump declared on Twitter that Pence lacked the courage to decertify the votes for the duly-elected next president of the United States, Joe Biden.

I will analyze the chart of the committee’s first public hearing to understand the dynamics of this historic, ongoing event, and its potential meaning for the US. This first hearing was held June 9, 2022, at 8 p.m. One of the most surprising “coincidences” or synchronicities is that the Ascendant for this committee hearing is exactly, to the degree, the same as the Ascendant of the US birth chart! This is a powerful signature that ties the hearings intimately to the US identity. Jupiter, ruling the Sagittarius Ascendant, is at 5° Aries in the 4th house of the hearing chart and exactly square the US Jupiter, at 5° Cancer in the 7th house. The Ascendant ruler in a chart is designated the “chart ruler” and represents a prominent planet in that chart. Looking at Jupiter in Aries, we note its ruler is Mars, and Mars is located powerfully in its own sign, Aries, also in the 4th house. This suggests that the will to take action regarding the people’s business (4th house), as a result of the information presented during the hearings, is strong. The exact Jupiter square between the two charts describes the issues of legality, philosophy, and belief, which are prevalent in the US and are now openly on display for public view.

The Sun of the hearing chart is located at 19° Gemini, closely conjunct the US Mars (21° Gemini), shining light on the US and a default way of doing things, its modus operandi. With Mars in Gemini in the US chart, we are a nation of ideas and information, and the exchange of these things. And with Mars square Neptune in Virgo, this brings the country into periodic times of confusion due to divergent opinions and debate over information. The January 6 committee’s work stimulates active discussion and the gathering and disseminating of information, and typical of the sign of Gemini, the split of rhetoric into divergent camps.

In the hearing chart, Mercury rules the Sun in Gemini at 27° Taurus, trine Pluto at 28° Capricorn, and exactly trine the US Pluto at 27° Capricorn — which is in its once-every-248-year return. This shows that the conversations and information presented by the committee is linked to the challenges this country faces in its political and power systems and its democracy, typical of the destruction and transformation indicated in a Pluto Return. A Pluto Return is a big deal for any country to navigate. It brings up unresolved past or current shadow issues and shows the weakness or decay in an existing system. The power factions represented by Pluto are vying for survival and control.

Dorothy Oja is a certified career astrologer (ISAR CAP) whose studies span 40+ years. She services an international clientele, lectures, writes and teaches. Dorothy’s specialties are Elections for Surgery, Relationship Compatibility (Davison Chart), and Children’s Profiles. She serves on the faculty of the International Academy of Astrology and Kepler College. She founded The Relationship Club which hosts astrologers who lecture on various topics pertaining to relationship astrology. Her first book is Planetary Resonance: Everything Leaves a Trace. She has authored two computer reports: Compatibility & Conflict for Romantic Relationships and Friendship and Business, (Cosmic Patterns Software). For 24 years, Dorothy has written and published a monthly newsmagazine, PlanetWeather which includes social and cultural commentary. Her Facebook daily blog page is www.facebook.com/DorothyOjaAstrology. She has served the astrological community as AFAN’s Chair of Legal Information and spent 16 years as ISAR Board member as Chair of Ethics and developing its Ethics Awareness Training program. Dorothy is writing a book on the Davison Relationship Chart. DOja07@gmail.com Twitter:@ojadorothy.