My name is Ozymandias, King of Kings;
Look on my Works, ye Mighty, and despair!
Nothing beside remains. Round the decay
Of that colossal Wreck, boundless and bare
The lone and level sands stretch far away.

Percy Bysshe Shelley’s sonnet “Ozymandias” was published anonymously in the Examiner of London on January 11, 1818, as Mars was retrograde in Gemini. The poem may not address the subject of war directly, but it’s no stretch to imagine that its narrator has stumbled upon the ruins left behind by one, soon to be reclaimed by the shifting sands.

When a warrior reflects
Mars only reverses course every two years, so unlike the planets orbiting further from the Sun — which spend several months every year retracing their steps — its retrogrades are always notable. What’s more, the war in Ukraine has brought Mars’s domain to the forefront of the global conversation. These are martial times, and the machinations of the planet that rules warfare are of particular concern now.

Mars made its ingress into Gemini on August 20, 2022, and will remain in the sign until March 26, 2023, by which time it will have spent more than seven months there. The unusually extended stay is, of course, due to the retrograde. Mars will station retrograde at 25°36’ Gemini on October 30 before making its direct station at 8°08’ Gemini on January 12.

Any person or institution with significant natal placements in close aspect to these two station points can expect to see developments of a martial nature at these crucial moments, as Mars slows to a standstill and appends an exclamation point to the natal placements it gazes upon. The state of Ukraine, with a chart cast for its independence in 1991, is one such institution. Its natal Mars at 25°05’ Virgo is in a partile square to the retrograde station; its natal Jupiter sextiles it from 25°58’ Leo. We can expect to see a key development in the war with Russia around October 30. 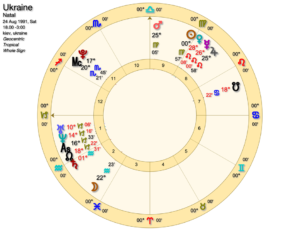 What might the nature of that development be? With Mars in Gemini, we can expect action, assertion, disruption, and conflict in the Mercurial realms of thought, communication, transport, and trade. Gemini is also a trickster realm, where provocation is deemed a valid method of shaking things up. Look for aggressive statements of intent, battles of ideas, and acts of cyber warfare. All of these things are already playing a role in Ukraine, but they’re likely to become a more dominant part of the story in coming months.

It’s also striking that Mars’s direct station at 8°08′ Gemini on January 12 will conjoin the natal Uranus in the much-favored “Sibly” chart of the United States. That’s something to watch, especially given that Gemini is the 7th house, pertaining to enemies and allies. When it comes to US foreign relations, expect the unexpected in early 2023. Mars-Uranus combinations tend to the explosive. 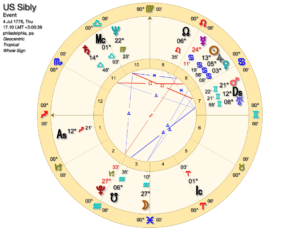 But let’s think, too, about the symbolic implication of Mars changing direction and retracing its steps. This conjures more possibilities: a reluctance or inability to act, reversals or conclusions to ongoing conflict, reconsideration of plans already in motion, and the planning of new courses of action. 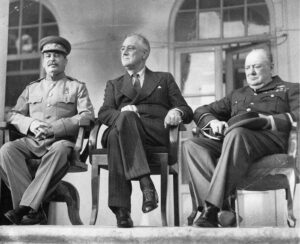 Stalin, Roosevelt, and Churchill meet for the first time in Tehran.

A striking example of Mars retrograde in Gemini comes from World War II. There were many conferences held between the Allies during the war, but the very first that included all three leaders of the so-called “Big Three” powers of the time — the United States, the United Kingdom, and the Soviet Union — was the Tehran Conference, which took place from November 28 to December 1, 1943.

It was a crucial moment in the war. Franklin D. Roosevelt, Winston Churchill, and Joseph Stalin met in the Iranian capital to discuss strategy in the fight against Nazi Germany and the other Axis powers. The crucial decision they took was to invade France and open a second front against Germany. The Soviets were fighting the Germans in the East, but now the Western allies would invade Northern France and force the Germans to fight on two fronts.

The sign of Gemini is particularly pertinent here because, firstly, this is a sign associated with communication, at the essence of the idea of a conference. But let’s note, too, that Gemini is the sign of duality, and the decision taken in Tehran was to open a second front. This turned out to be a major turning point in World War II.

It’s also fascinating to consider the decan of Gemini in which Mars stationed retrograde that year: Gemini III. Austin Coppock, the major authority on the 36 decans of the zodiac, speaks of this decan specifically as a place where a decision must be made. As the last ten degrees of the Sun’s annual journey before the summer solstice — when the nights begin to encroach on day once again — this is the end of the road for curious Gemini, who is now forced to choose: What will I do? Who will I be?

In October, Mars will once again station retrograde in Gemini III. In the ensuing weeks, look for war conferences, crucial decisions about strategy, or even the expansion of conflict to new fronts.

Cyberattacks
Hacking attacks and cyber conflict seem likely developments with Mars moving through the airy, informational realm of Gemini. And they have historical precedent.

With Mars retrograde in Gemini in January 2008, the Church of Scientology attempted to have a bizarre video of Tom Cruise that had leaked onto YouTube taken down. The hacking group Anonymous objected to the Church’s actions and launched a campaign of cyberattacks it named “Project Chanology.” (“Chanology” is a portmanteau of “Scientology” and “4chan,” the preferred message board of many Anonymous members.) The campaign’s operations included phone line nukes, black faxes, and DDoS attacks, and as a result of the latter, the Church of Scientology’s website became inaccessible.

Wikipedia’s entry for 1990 tells us that during the Mars retrograde in Gemini of that year, TAT-8 — a transatlantic fibre optic cable carrying internet traffic between the United States and Europe — failed, causing a slowdown in connection speeds. This is eye-catching to say the least, especially in light of recent news stories claiming that Russian submarines are threatening undersea data cables. From that story:

The head of the UK’s armed forces has warned that Russian submarine activity is threatening underwater cables that are crucial to communication systems around the world.
Adm Tony Radakin said undersea cables that transmit internet data are “the world’s real information system”, and added that any attempt to damage them could be considered an “act of war.”

An attack on undersea cables would be at the extreme end of the possibilities promised by this Mars retrograde. But cyberattacks of some kind, particularly against Ukraine, are a very realistic prospect, especially given that Russia has already launched attacks of this kind against Ukraine in recent years. In December 2015, Russia managed to hack and shut down the country’s power grid. We should not be surprised to see something similar happening this year. 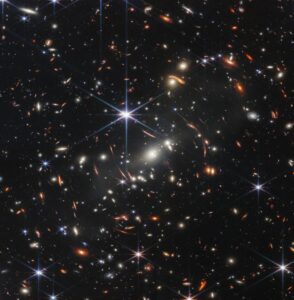 Perhaps surprisingly, a consistent theme that emerged from my review of previous Mars retrogrades in Gemini was advancement in our view of the cosmos. During the retrograde of 1612, Galileo became the first person to see the planet Neptune, when it conjoined Jupiter on December 28 of that year. The astronomer mistook the slow-moving planet for a fixed star. Thus — fittingly given Neptune’s association with confusion and resistance to definition — Neptune’s identification as a planet would have to wait until 1846, when its position was mathematically predicted by Urbain Le Verrier.

Moving closer to our own time, on October 11, 1958, the day of a Mars retrograde station in Gemini, NASA launched its first space probe, Pioneer 1. A half-century later, during the Mars retrograde in Gemini of 2008, NASA’s MESSENGER space probe made its first close approach to the planet Mercury, gathering data that enabled NASA to generate detailed images of its surface. That’s an incredibly literal manifestation of the transit: with Mars turning reflective in the sign of Hermes, humanity stole a good look at the planet Mercury itself.

Why do we see these enhancements in vision when the Red Planet reverses course in Gemini? We see here a combination of martial adventurousness with the curiosity associated with Mercury’s outward-oriented sign. But we should also consider what a warrior does when in reflective mode: he gathers information. In this sense, then, these are reconnaissance missions.

This year has already been notable for incredible new images of the universe gathered by NASA’s James Webb Space Telescope. We could well expect to see more developments in the imaging of our universe at the end of this year.

The coming market crisis
Given Mercury’s rulership of markets, we should note the possibility for disruption of trade routes during the retrograde. During the Mars retrograde of 1850, the British blockaded Greece’s Piraeus port as part of a dispute involving a British citizen living in Athens named David Pacifico. What became known as the “Don Pacifico affair” was a striking example of gunboat diplomacy, the use of naval power to force outcomes in international affairs. We should bear in mind the possibility for similar situations developing during this year’s retrograde. I’m particularly mindful of the tense situation in the Black Sea, a crucial channel for Ukrainian wheat exports and a key theatre of the Russia-Ukraine War.

We should also brace for serious disruption in the financial markets. On January 21, 2008, with Mars retrograde in Gemini, markets plunged as the subprime mortgage crisis deepened. This is particularly notable because then, as now, we had Saturn and Uranus in hard aspect to each other. Their 45-year cycle is intimately connected to the rhythms of boom and bust affecting the US economy. In 2008, the planets were opposed. Right now they’ve reached the waning square of the same cycle. That square perfected three times in 2021; it won’t perfect again this year but will get to within less than a degree of doing so in October.

This is important because the waning squares of the Saturn–Uranus cycle have coincided with the toughest economic times of the past century. The last such square came in the mid-1970s, when major economies were struck by stagflation, a combination of high unemployment and inflation. The waning square prior to that came in 1930, coinciding with the Wall Street Crash and the Great Depression of the 1930s. This year’s Mars retrograde may well act as a trigger to something similar; the signs are already there.

But let’s try to end on a more optimistic note. Previous Mars retrogrades in Gemini have also frequently coincided with the formal ends to armed conflicts. In 1659, the French and Spanish formally ended the 24-year-long Franco-Spanish War with the signing of the Treaty of the Pyrenees. In 1817, the Third Anglo-Maratha conflict ended, leading to a period of peace in India, albeit under British colonial control. In November 1990, leaders of the United States, Russia and many European states signed the Conventional Armed Forces in Europe Treaty, a major moment in the wrapping up of the Cold War.

I believe it’s highly unlikely we’ll see something similar happening in relation to the war in Ukraine. But we can at least hope that somewhere in the world, people will gather to proclaim: “Our war is over.”

Dan Waites is a consulting astrologer, researcher, and content creator focused on mundane and natal astrology. He says: “My goal is to use astrological wisdom and historical research to understand the times we’re living through and help more people cross the threshold into a magical cosmos.” His writing on mundane astrology can be found at danastro.substack.com, his YouTube channel “World Astrology Report” and his website for bookings and contact: danwaitesastrology.com