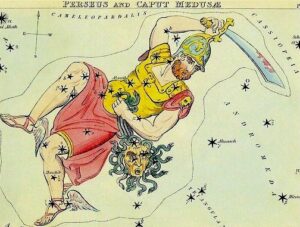 This blog is updated from its original posting in December 2020.

In 2019 when MacKenzie Scott first announced her philanthropic intentions, she wrote: “There’s no question in my mind that anyone’s personal wealth is the product of a collective effort, and of social structures which present opportunities to some people, and obstacles to countless others.” (1)

MacKenzie Scott was married to Jeff Bezos from 1993 to 2019. She worked closely with her husband in developing Amazon and the $38 billion divorce settlement made her the third-wealthiest woman in the world. A month after the divorce, MacKenzie signed the Giving Pledge, a “charitable-giving campaign in which she undertook to give away most of her wealth to charity over her lifetime.” (2)

As of April 2022, it was reported that she has donated $12 billion in three years. (3) Morehouse College, Howard University, community colleges, women-led organizations and non-profits focused on racial equality, LGBTQ equality, democracy and climate change are some of the organizations she gifted in 2020. More recent recipients have included Planned Parenthood, aid to Ukraine, and, on September 6, the announcement of the donation of her $55 million estate in Beverly Hills to the California Community Foundation. “The CCF hopes to quickly sell the high-maintenance spread, with the proceeds going towards ‘affordable housing projects and an immigrant integration program.’” (4)

MacKenzie Scott has the Sun in Aries ruling the Leo 5th house; the Moon in Taurus is lord of the Cancer 4th, both luminaries are in their signs of exaltation. There are five planets in Taurus in the 2nd house — the sign of money in the house of money. 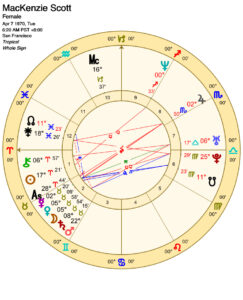 With Aries rising, the chart ruler Mars is at 22° Taurus. This is the degree of the fixed star Capulus, the right hand of Perseus raising a sword to slay Medusa. Capulus is connected to strong, direct, focused energy.

Venus in her home sign Taurus, conjunct the exalted Moon is powerfully magnetizing. The first seven degree of Taurus are also Venus’s bounds; both Venus and Moon are in these degrees, thus, both are thus even more graced/supported by Venus’s significations.

Venus rules the Taurus 2nd house of money and the Libra 7th of partners — the husband is tied to the wealth.

She was married to Jeff Bezos on September 4, 1993. Transits that day show Mars (1st lord) and Jupiter (9th and 12th lord) conjunct at 15° Libra in her 7th. Using profections (from the Ascendant), she was 23 and in a 12th house year, making Jupiter the lord of the year. Natal Jupiter is in the 8th of money shared and gained from partnership. 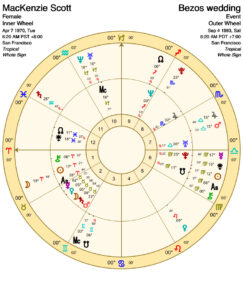 When the couple announced their divorce on January 9, 2019, transiting Mars was 5° Aries (in the 1st) opposite Uranus in 7th. Transiting Uranus was at 28° Aries, right on the Ascendant. 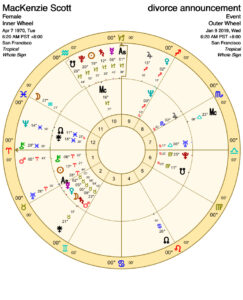 She was 48, a 1st house year — with Aries rising, Mars is the lord of the year. I love the image of Mars, important as lord of Ascendant and Sun, and empowered by by Capulus’s fierceness and will force to cut through the red tape, shall we say, to get something important accomplished.

Born during the day, the Sun in Aries is the sect light. Placed just above the horizon the Sun, in the 18th degree, is one degree away from the 19th, the exalted degree. This is commanding sense of individuality and expressiveness, connected to the Leo 5th house of children and creativity. A mother of four (three sons and an adopted daughter from China), she is an author who won an American Book Award in 2006 for her novel, The Testing of Luther Albright. She also founded an anti-bullying organization, Bystander Revolution, in 2014 — another echo of Mars/Capulus.

The pre-natal solar eclipse, set for the place of birth can give a picture of the overarching themes and purpose of the life. The was a total solar eclipse on March 7, 1970 at 16°44’ Pisces. 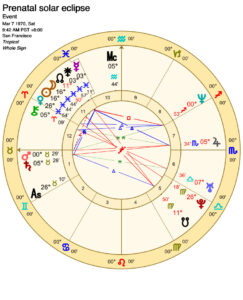 This chart has 26° Taurus rising (fixed star Algol), with Venus on her degree of exaltation, 27° Pisces. The Pisces stellium is in the 11th of social concerns; the ruler, Jupiter also rules the 8th house of joint resources and is placed in the 7th of marriage. Again, a fortuitous connection between money and resources, philanthropy and partnerships. (5)

(2) Biographical notes and quotes from: Wikipedia

(5) This technique can be useful if there is an unknown birth time. Here are some previous TMA blogs on the subject: