“I would be surprised if 10 years from now we’re not using electronic currency in some way…it might make sense just to get some, in case it catches on. If enough people think the same way, that becomes a self-fulfilling prophecy.”
Satoshi Nakamoto, January 16, 2009 (1)

Earlier this year, Satoshi Nakamoto’s self-fulfilling prophecy came true in a very big way. Bitcoin, the original electronic currency, reached an all-time high value of $60,000 per coin in April. That means a whole lot of people were thinking the same way! Since then cryptocurrency has enjoyed an expansion into all kinds of areas we traditionally think of as belonging pretty much exclusively to banks. As well as trade assets and derivatives, decentralized finance (DeFi) can help you do things like earn interest, borrow, lend, and buy insurance. Only it’s much faster than dealing with a bank, with less fees and no paperwork.

I’m a bit embarrassed to say that, up until very recently, I was pretty much oblivious to these developments — which I now see as nothing short of a Revolution in progress. I had been hard at work in my own private practice, serving my clients and members, researching, writing and creating. I hadn’t a clue that cryptocurrency was reaching a new threshold of mass adoption until one of my members asked me to help them time their investments using astrology.

I quickly discovered that the development of blockchain technology and cryptocurrency over the last 22 years is a very clear and profound example of the premises in my book, Hermetica Triptycha: The Mercury Elemental Year. The basic premise is simple. Each year Mercury spends more time in one element than all the other Elements combined. And this Elemental emphasis drives mass socio-cultural narratives. For example, regarding Air years, I wrote:

“Air is moist becoming hot and is the most naturally communicative of the elements. The basic nature for air is to rise (hot) and to unify (moist). Therefore air serves to answer the basic human needs for intellectual activity and theoretical unity, belonging-ness and cooperation with others, and to quickly understand and adjust to diverse ideas and people.” (2) The moist quality of air is what Nakamoto is referring to in the opening quote: If enough people share an idea, this cohesiveness naturally leads to mass changes. As the new idea gains momentum, it eventually envelops and overwhelms the previously accepted consensus view.

Not only the philosophy but even the actual technology of blockchain and cryptocurrency very much resembles the qualities of air. Again, air is hot and moist — that is, active and connective or unifying. Blockchain is literally a way of actively linking together (connecting) blocks of information (air) using cryptography. Blockchains are typically managed by a peer-to-peer (person to person) network of connected nodes (computers that share the same program). All of this inter-connectivity and information exchange is classic air.

In fact, the Internet itself is a classic manifestation of air, in that it is simply a more basic kind of network which allows information exchange. And of course the Internet was born after the Great Mutation of Jupiter-Saturn conjunctions into Air signs in 1980. It should come as no surprise then that the two biggest cryptocurrencies, Bitcoin and Ethereum, both began during Mercury Elemental Years of Air. Bitcoin (BTC) began in 2009 and is the original. The actual birth data for Bitcoin (which is stored in the blockchain itself): January 3, 2009 at 6:15 p.m. in London. (3) 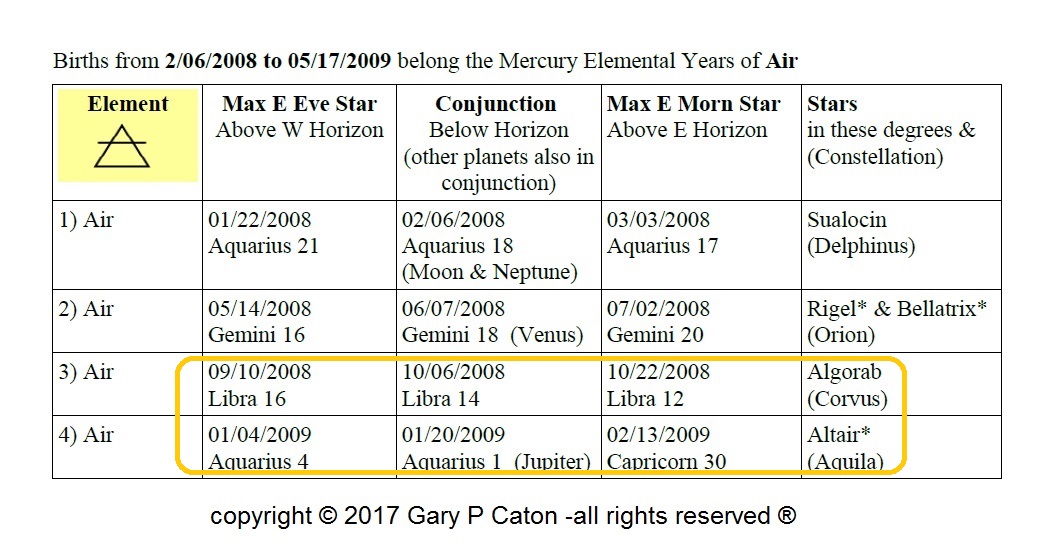 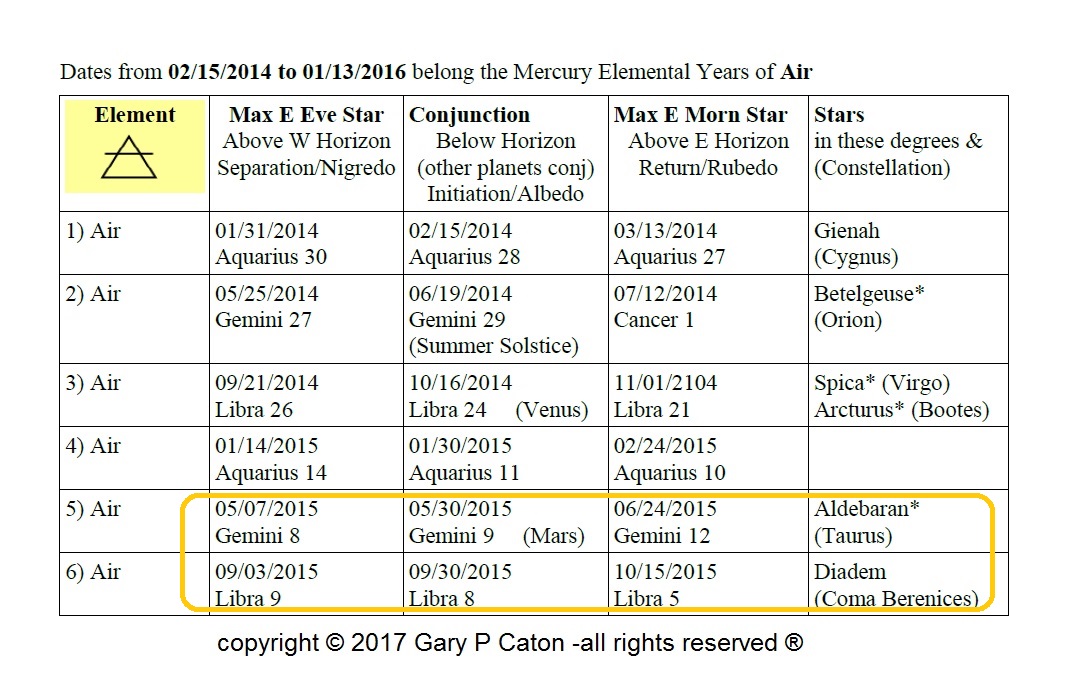 In 2021 as the Mercury Elemental Year returns to Air, we have an explosion of the crypto industry as several new cryptocurrencies have flourished to reach more than 50 billion dollars in total market value. This year has especially favored those with “smart contract” capabilities, like Cardano and Solana. Even the phrase “smart contract” corresponds to air, as it is an intelligent way of making agreements that connect people. This year the crypto industry as a whole reached more than two trillion dollars in market cap. This has garnered the attention of the U.S. Government as Congress looks to regulate and tax the fast growing industry. More than just increased value, crypto has also branched out into new applications and areas like finance, and pop culture (via NFT’s or non-fungible tokens). 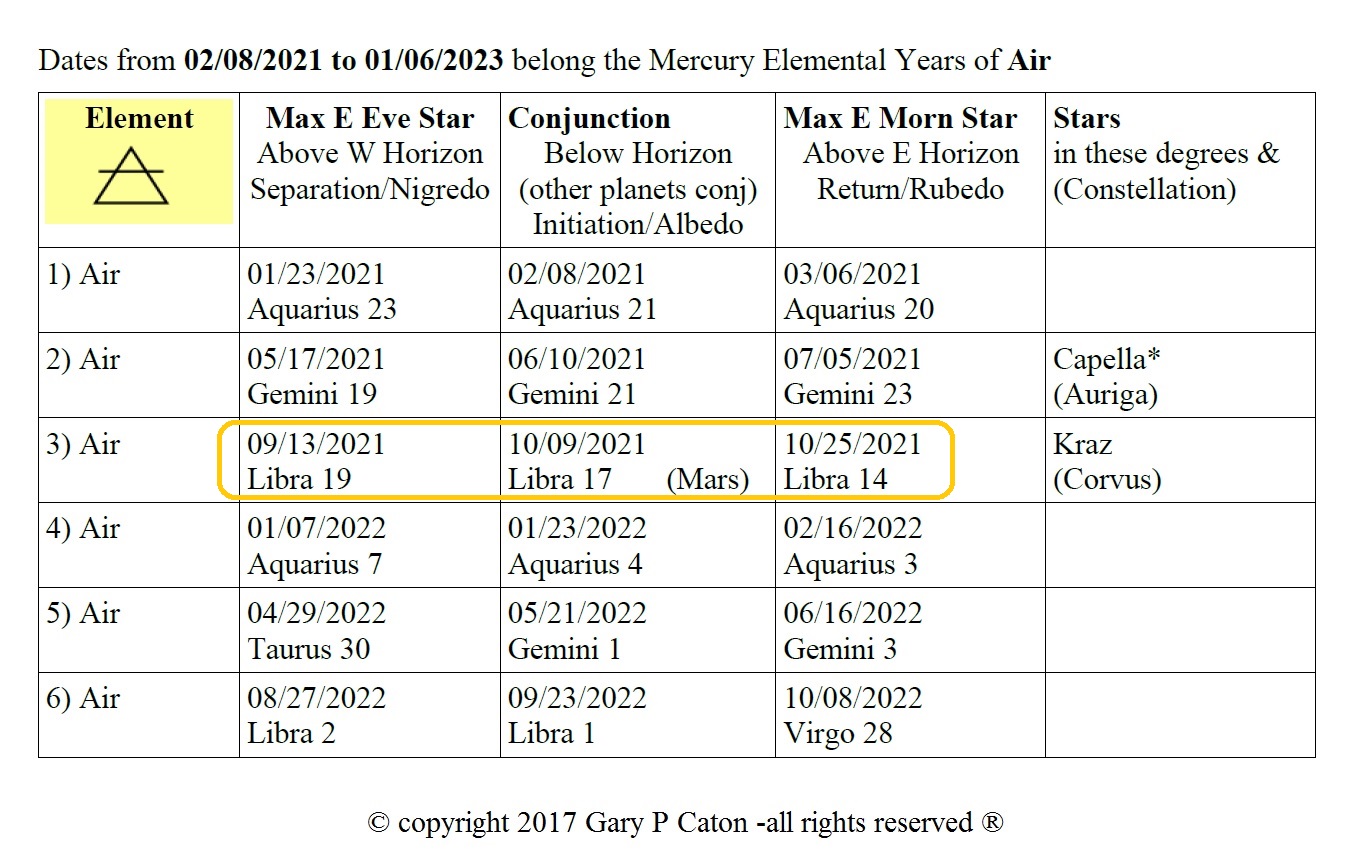 Taken together, this means that three consecutive installments of Air Years for Mercury have seen major introductions or upgrades to this game changing technology. From this we can clearly see how Mercury has served to augment the powerful mutation of the Great Conjunctions of Jupiter and Saturn into the Air Element. And since the Great Conjunctions will continue to be in Air signs for a very long time to come, the basic astrology seems to be saying crypto is also probably here to stay.

With Bitcoin recently logging its 700,000th block, its staying power seems obvious. (5) Furthermore, having begun in 2009 under the auspices of Saturn opposite Uranus and come to full flowering under this year’s Saturn-Uranus squares, it seems clear to this astrologer that what we are witnessing and experiencing is nothing short of a Revolution. Crypto has already changed the world in some pretty incredible ways. You can transfer currency to someone now with very low fees and about as quickly and easily as you can send them an email. It’s not extreme hyperbole to say this makes services like Western Union seem almost like the Pony Express. And given the rapid pace of development just this year, we may just be seeing the tip of the iceberg. Some say that crypto holds the keys to unleashing the full power of the Internet – that crypto is essentially Internet 3.0. Whether Bitcoin manages to reach another all-time high this year, or not (and there are sound astrological reasons to think it could) – it might make sense to just get some crypto, in case it continues to catch on.

Full disclosure: I own crypto. As of this writing, I only own coins that pay interest (specifically, USDC, ATOM, XTZ & ALGO) – but (as you might have guessed) I have ideas about adding some others to my portfolio.

(3) The timestamp on BTC genesis block reads: January 3, 2009 18:15:05 UTC. The place comes from the newspaper headline embedded in the code “Chancellor on Brink of Second Bailout for Banks” which ran that day in the London Times.

(4) The timestamp on ETH genesis block reads: July 30, 2015 3:26:13pm UTC. I have assumed the place as the headquarters of the Ethereum Foundation, which is in Zug, Switzerland.

Bio: Gary P. Caton is an Hermetic practitioner integrating diverse traditions, art forms and practices gathered from his spiritual quest over a full Saturn cycle. Initiated an astrologer by a magnificent dream in 1993, he’s since become an accomplished counselor, writer, podcaster, teacher, photographer and mage. Gary is the author of Hermetica Triptycha: The Mercury Elemental Year, and host of the popular Hermetic Astrology Podcast. Connect with him at DreamAstrologer.com