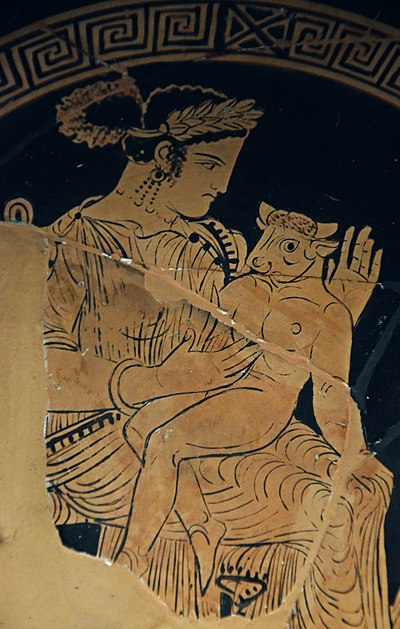 The Moon fertilizes itself in the earth-as-womb we find in Taurus, but it squares Saturn for as long as the Lord of Consequence remains in Aquarius. A scene unfolds before us: the labyrinth, the Minotaur — but this time, Theseus is not the star of the story.

Like so many myths before this, the story of our Minotaur, and my metaphor for Moon in Taurus (especially square Saturn in Aquarius), is an allegory for disobeying the gods, and for denying them their burnt offerings. The new King of Crete, Minos, petitioned Poseidon for a stunning white bull which would be sacrificed in tribute to the great oceanic God; however, greedy and covetous of the beauty of this alabaster animal, Minos decides to keep it for himself, and sacrifice a different (and inferior) bull in its stead. Enraged, as predictable, Poseidon enacts revenge the way many Hellenic deities like to take revenge: adultery which leads to monstrosity and tragedy. Minos’ wife, Pasiphaë, falls in love with the bull, and via some clever craftsmanship from Daedalus, manages to mate with him. She gives birth to the half-human, half-beast Minotaur, of which was said:

“Pasiphaë nursed the Minotaur but he grew in size and became ferocious. As the unnatural offspring of a woman and a beast, the Minotaur had no natural source of nourishment and thus devoured humans for sustenance. Minos, following advice from the oracle at Delphi, had Daedalus construct a gigantic labyrinth to hold the Minotaur” (1)

This is a theme throughout the mythologies and the fairytales of the world — dreaded children that were the summation of human and inhuman union, echoing so much of the Changeling lore. Often these were considered tragedies, allegories which one was wise to avoid, or ways in which to disavow or compartmentalize our own “beasthood.” I think of the Czech Otesanek, a log-turned “living” child who devours everything in sight, or the fireside spooky tales of dhapmirs, or the ferociously starving fairy children raising terror in Limerick. We did not need Abrahamic religion in order to fear our own “animal nature;” this existed before commandments on tablets, before Freud wrote Beyond the Pleasure Principle, before Melanie Klein argued that children had murderous instincts, before Rousseau espoused a “social contract.”

Contemporary astrology loves to meme about the Taurean “appetite,” and the majority of the jokes typifying this sign have to do with how much they love to eat. I raise the point of the Minotaur, and the Otesanek here, because the hunger endemic to the Taurean appetite is not one ultimately sated by their pantries, but an ancient, aching blood memory to be returned to whatever prima materia they were made from. Thick, water-logged soil, perfect for growing in, slow to till over. Not streaked with the ash of calcified bones like Capricorn, but saturated with blood — blood from menses, blood from enemies, blood from births: this Taurean soil holds the archives of all who are born from it, and return to die in it. Over and over this cycle continues, these sacrifices made manifest in the deliberate, intuitive choreography of a figure never entirely human. Never entirely of the mortal world.

After surveying a bunch of pop-astrology pages, this seemed to be the dominant list of stereotypes; however, if we allow ourselves to search for patterns, it’s easy to recognize that all of these qualities speak to Apollonian propaganda to degrade the Dionysian. Why would a face of Venus be so reviled? Because it is feared. Because people will always fear what is agrarian, what is “simple.” When we unpack the implications of “simple,” we realize it was never simple at all, and rather a way to try and dismiss what is “natural,” what is primal, what feels more intuitive and primordial than anything else: fighting, fucking, eating, sleeping, not sharing the things we want to keep for ourselves, not conceding when asked to. It is often the glaring and authentic alignment with Will and Desire which discomfits us about the Taurean impulse and its connection to beasthood.

I write a lot about hunger, about insatiability, about the vacuous hallowed hearth inside the carapace of the body which seems to unrelentingly require it be filled. All of the twelve zodiacal signs illustrate this in unique ways, but Taurus is, perhaps, the most overt and direct about that. Consider how much rest, how much food, how much satisfaction, and pleasure it must require in order to restore such a taut balance, to endlessly pace the seemingly inscrutable channels of the labyrinth you were trapped in simply for being born. Another stereotype often given to Taurus is that they are “escapists,” looking to sexual experiences or intoxication or other addictions as ways of “escaping” reality. I ask, however, which beast does not yearn to be free of his cage? Which Minotaur would not wish to escape the center of his labyrinth? Which of us doesn’t long to escape the Panopticon of surveillance culture?

Desiring freedom does not make one an escapist, and it is not a personality flaw. We will all seek relief when we are suffering.

Which brings me to this lunation, and the lessons of the Minotaur. You must dig deep into the monstrosity of your body, your animal nature, to decipher what your soma is telling you. Do you need to just sleep for 24 hours? Do it. Are you hungry even after you finished lunch? Go fucking eat something. Do you crave human touch? Then hook up with someone (safely, of course). You are allowed to be free from the expectations others have for your desires; you are allowed to dream of escaping the labyrinth of expectations that your early childhood development, your peer group, society, whatever the hell decided for you. Sweat and scream and writhe and cum; eat what you want, touch yourself where you want, move your body like it is the powerful beast it inherently is.

Today, I will twist my body against the warm, slick mouth of the earth. I will feel it heave and sigh beneath all the parts of my body I often ignore. I will remember how it feels to be an animal, still — how it feels to be free. I recommend you find your way out of the labyrinth, too.

Bio: Sasha Ravitch is a writer and creator specializing in stars and spirits. She is a professional astrologer and spirit worker by trade, who periodically teaches occult philosophy, astrology, psychoanalysis, and witchcraft, while living in New Orleans and traveling frequently to New York. She casts her magic through a passion for meaning-making, relationships, and a devotion to: ancestral dead, psychoanalysis, sublunar spiritwork, folkloric witchcraft, intranquil daemons, and an affection, in particular, for Freud and Saturn.