In Spain there is a proverb which goes: “En martes, ni te cases ni te embarques.” (On Tuesdays, neither get married nor embark on a journey.) According to wikipedia: “In Spanish-speaking countries, instead of Friday, Tuesday the 13th (martes trece) is considered a day of bad luck. The Greeks also consider Tuesday (and especially the 13th) an unlucky day.”

Most likely the origin of this superstition about Tuesdays being unlucky has to do with Hellenistic astrology. The Babylonians had assigned each of the visible wandering stars (‘planets’) to a day of the week. Sun got Sun-day; Moon, Monday; Mars, Tuesday; Mercury, Wednesday; Jupiter, Thursday; Venus, Friday; and Saturn, Saturday. The English names for the days preserved the planetary rulers but alluded to the names of Norse gods instead of Greek or Roman gods.

The texts of Hellenistic Greece and the Persian-Arabic astrologers made their way into Europe through Spain, where they were translated into Latin. Images such as the following of the planets ruling each day and hour of the week were familiar to the educated classes of Europe during the Renaissance: 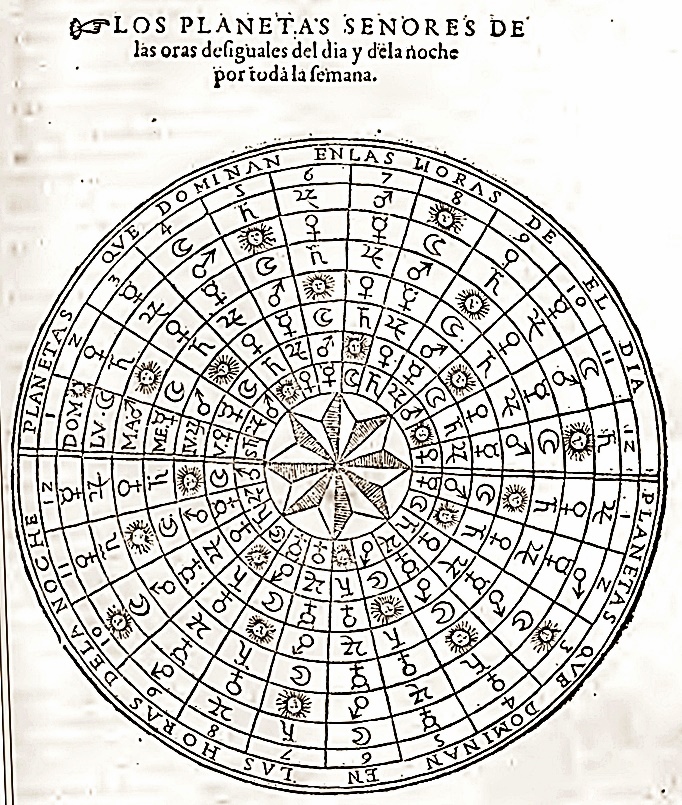 The sequence of planetary hours for each day of the week.

In ancient astrology Mars and Saturn were the two principal malefic planets, causing harm and being inimical to life. Mars was especially dangerous during the daylight hours because the heat of the Sun enhanced the natural fiery nature of Mars, making him more impulsive, aggressive and violent. Saturn was especially harmful during nighttime hours because the coldness of the night enhanced Saturn’s natural tendency to limit, constrict, and chill the life out of living creatives. Perhaps Robert Frost had Mars and Saturn in mind when he wrote his poem “Fire and Ice” which debates whether the world will end in fire or in ice.

The astrological teachings about planetary days and hours and the nature of malefic planets being enhanced by the “sect” (diurnal or nocturnal nature) of the chart apparently got codified in the the Spanish proverb: “En martes, ni te cases ni te embarques.”

Bio: Anthony Louis is a psychiatrist who has been studying astrology as a serious avocation since his early teens and tarot for the past three decades. His longstanding interest in the history and symbolism of the divinatory arts has led him to lecture internationally and to publish numerous articles and books on astrology, tarot, and other forms of divination. His highly acclaimed text on horary astrology first appeared in 1991 and was revised and reissued in 1996. In February of 2021 Llewellyn published his most recent text on finding lost objects with horary. His book Tarot Plain and Simple now has over 150,000 copies in print. Anthony is a member of the Astrological Society of Connecticut. His blog is TonyLouis.Wordpress.