1. Mercury turns direct on October 2 at 24°11’ in the analytical sign Virgo. For most people, this station comes as a welcome shift away from weeks of discontent and leads into growing effectiveness in personal and business affairs. However, Mercury is within one degree of opposing Neptune. It’s best not to make any important decisions from October 1–4 until Mercury advances into a clarifying trine with Pluto. Mercury’s trine to Pluto in Capricorn is most effective from the 5th–7th when all doubt, confusion, and ambiguity disappear — especially if one takes the time to fact-check.

2. Mars squares Neptune on the 12th and is a noticeable influence from the 8th–15th. Mars is currently in the restless, talkative sign of Gemini, and the issues that crop up now may repeat later in Mars’s passage in the sign, which ends in March 2023. One obvious pitfall is over-indulgence in drugs and/or alcohol. Mars here is easily distracted and may encourage endless chattering about nothing in particular. Or more seriously, mental health issues such as anxiety, depression, and delusional thinking may become problematic. The positive expression of this influence includes heightened creativity, sensitivity toward others, and increased interest in following a spiritual path. 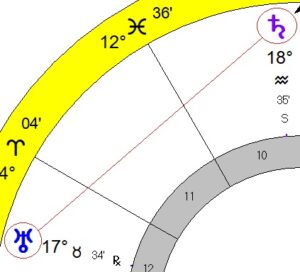 3. Saturn turns direct on the 23rd at 18° Aquarius and begins to separate from its long-term square to Uranus in Taurus. These two antagonistic archetypes have been pitted against each other since November 2021, bringing all kinds of divisive factions, health issues, and social anxiety. Between now and March 2023 (when Saturn enters Pisces), individuals have the opportunity to find their favorite social circle, their special network where they can fully express themselves without fear of reprisal or enemy action. Juno also turns direct on the 23rd, making the rest of October a good time for you and your significant other to participate in group activities. Or, you may find a good partner within your network. 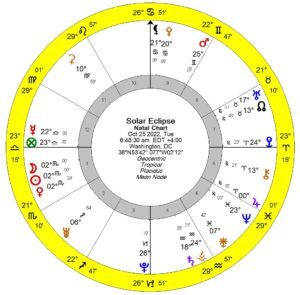 4. The solar eclipse on the 25th is exactly conjunct Venus at 2° Scorpio. Since Venus governs financial as well as love interests, those with natal or progressed planets at 0°–5° in the Taurus–Scorpio polarity are especially subject to dramatic changes in these areas, now and over the next several months. This may manifest as an abrupt change of financial or partnership status. The solar eclipse chart set in Washington, DC, features angular Pluto (conjunct the 4th-house cusp) at a time when the US is going through its third and final passage of its Pluto Return. This marks this election season as a critical passage for the nation and a dramatic ending and new beginning.

5. Mars in Gemini turns retrograde on the 30th. The station may lead to sudden events which change your attitude and enthusiasm about various undertakings. This is especially true if you have placements at 24°–26° of any sign. If you know your horoscope, check out the house where Mars is turning retrograde to understand which affairs may be influenced. In general, expect reduced enthusiasm and passion about any project you’re working on. The next 2.5-month period is a good time to consider your motivations for undertaking specific projects and being with specific individuals. Expect delays and perhaps even an end to some activities. Between this station and January 11 when Mars turns direct, someone from the past or an old issue may resurface.