TMA is posting this blog as general information to our readers about the astrology of cryptocurrencies; we are not endorsing the author’s work.

*Author’s Disclaimer: Please note I am not a financial advisor, this report should not be taken as financial, investment, or trading advice. Bitcoin is a volatile, high-risk asset. The author assumes no responsibility or liability for your investment decisions or any financial gains or losses based on the information in this report.

Greetings, and a big thank you to TMA for inviting me to write a financial astrology blog for cryptocurrencies!

I have been using astrology to track Bitcoin and other cryptocurrencies since 2017. Since my article, “The Astrology of Bitcoin,” appeared in TMA (October–November 2019), and my appearance on Chris Brennan’s The Astrology Podcast in December 2020, I have gained some notoriety for this work and garnered a large Twitter following. By combining financial astrology work with traditional technical price chart analysis for financial markets, I have created a hybrid model I call “Astro TA.” By using ancient astrology techniques, we can often accurately predict this most modern, cutting-edge financial market of cryptocurrencies.

Crypto markets rise and fall with the largest crypto, Bitcoin (BTC), so BTC is our main focus. (1) However, the Ethereum natal and progressed charts can often add important information. Crypto markets have been in a major correction from the November high of $69,000, and are down by 40 percent. This is potentially a good time to enter the market — at least you know you aren’t buying at the top! Still, uncertainty around inflation and the Federal Reserve policy carries more risk for markets, and they could still go lower. (This is written on Jan 29.)

Bitcoin and Ethereum have been some of the most profitable assets in the world on the 5–7 year time frame, and macro factors like Uranus in Taurus seem to be favorable for cryptocurrencies to revolutionize global markets and money. Cryptocurrency may represent a generational investment opportunity. However, the hair-raising volatility is not for every investor. The Jupiter–Saturn conjunction in Aquarius in December 2020 was a favorable long-term factor for Bitcoin (the first global currency of the internet), representing a monetary shift from the earth element (paper cash and metals) to the air element (digital money).

However, once again, as in May–July 2021, Jupiter in Pisces has been extremely bad for crypto markets (and stocks), and we have to keep expectations lower, as this placement continues through May 2022. Jupiter in Pisces seems to be antagonistic to crypto. Venus retrograde has also been highly unfavorable for Bitcoin in recent weeks. Moving forward, things look somewhat better in February, and we should see markets stabilize after BOTH Mercury and Venus are direct after February 3. However, New Moons have been quite bearish, tending to act as a sell signal and bring more of a downside for BTC; so the situation is mixed.

Bitcoin price chart with Moon phase shows that Bitcoin has sold off sharply, roughly around the New Moons, 9 out of 11 times in the past 12 months. (The filled-in circles are the New Moons.) 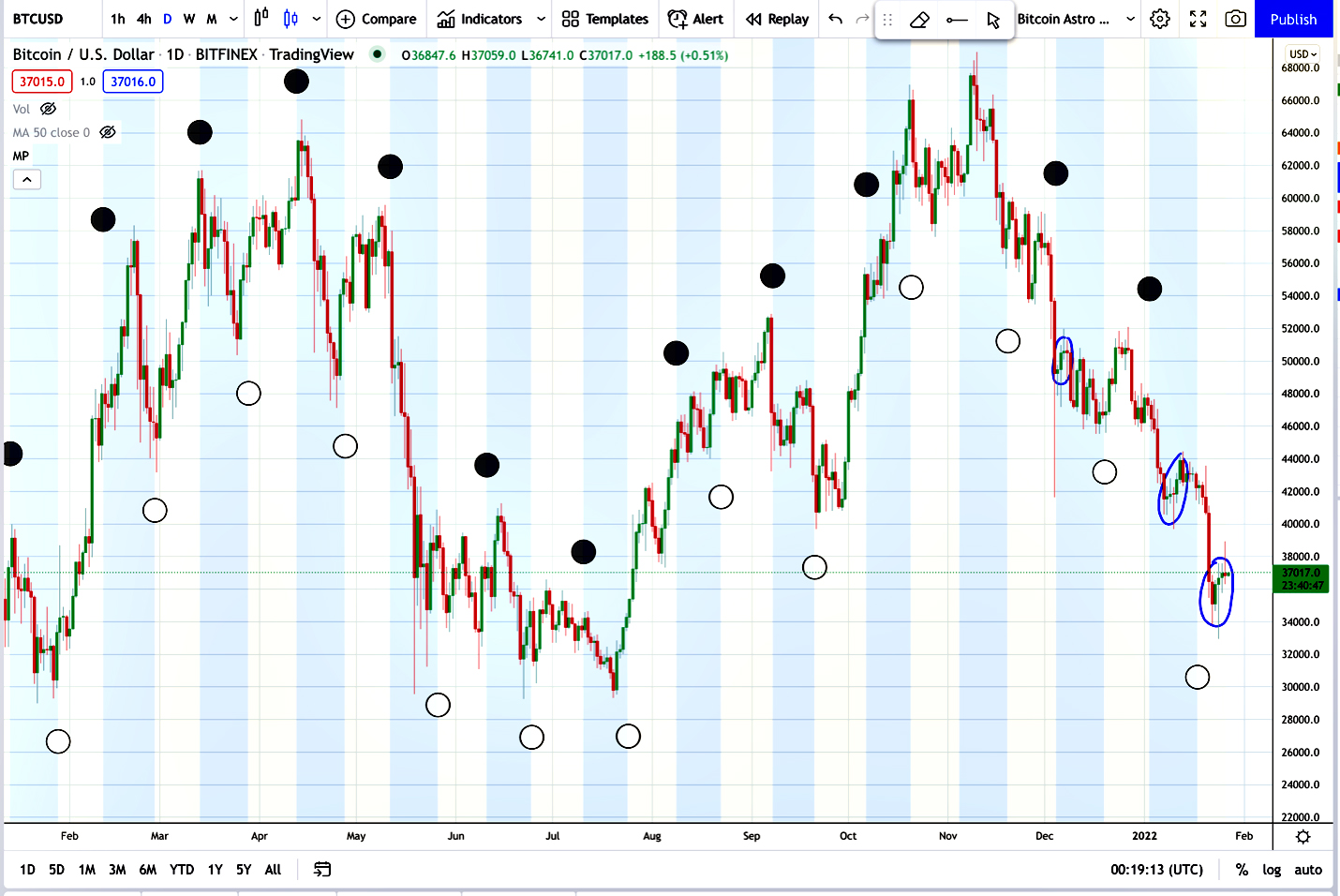 Transiting Mars sextile Jupiter and trine Uranus from February 3–8 looks generally more positive for global markets. Saturn with dignity in Aquarius and cazimi on February 4 is also favorable. Specifically, transiting Venus conjunct BTC Sun (13°30’ Capricorn) on February 8–9 is also good for BTC. However, we are not out of the woods and still have some risk for another drop when transiting Neptune is opposing BTC Saturn (21°45’ Virgo), and Mars is conjunct BTC Sun around February 10–11. The long Venus–Mars conjunction through all of February may be a continued drag for markets, as wealth planet Venus suffers.

But the second half of February looks more bullish with a long series of favorable transits in the BTC natal chart. And the period of Jupiter sextile Uranus and the BTC natal Sun, and Mars trine Uranus, will be some of the more upbeat astrology we have seen in a while. So in this period, we could see a longer relief rally take place. The problem is, Jupiter in Pisces has been so bad for crypto; if there is no bullish rebound under these favorable aspects in the second half of February, then the market is really in trouble, and we may have to wait for Jupiter to leave Pisces and enter Aries in mid-May 2022 to see a more bullish rebound. Jupiter in Aries was historically bullish for BTC in 2011, but this was before BTC was widely traded. The US Pluto Return in late February is another possible risk factor that could affect financial markets.

Footnote:
(1) The Bitcoin blockchain “genesis block” is time-stamped for January 3, 2009, at 6:15 p.m. GMT, no known location. The most commonly used chart is set for London, England, with 8° Leo on the Ascendant; but many other possible locations are in use as well.

Bio: Robert Weinstein has studied astrology for over two decades and has been doing financial astrology for crypto markets since 2017. His website is astrocryptoreport.com He can be found on Twitter at @AstroCryptoGuru and his Patreon group has very detailed monthly and weekly market reports and live video analysis.