As I look at the transits for February, I see several motifs overlapping: the concentration of activity in Capricorn, the last earth sign, and Pisces, the last water sign.

We can understand the elements — Fire, Earth, Air, and Water — as developing through the seasons, their qualities having some sort of maturity or flowering in the last sign of their respective genre. Capricorn represents earth in its fullest, most complex expression; likewise, Pisces is water at its most refined.

During Capricorn season, the Winter Solstice (in the northern hemisphere), the daylight is short due to the Sun’s maximum southern declination. Then begins the steady climb back to days and nights of equal length at the Spring Equinox, gradually followed by more light-filled days toward the maximum northern declination of Cancer’s season, the Summer Solstice. 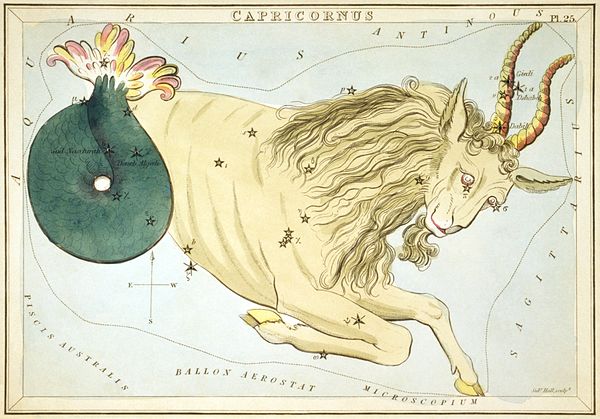 The current stellium of Capricorn planets suggests the ongoing climb out of the dark into more light. The imagery of awareness of and traveling in dark places runs through worldwide culture now in countless ways. Storylines of all sorts that have kept us in the dark, both individually and collectively, are being re-written and re-imagined. The integration of personal darkness, the unconscious, and the shadow has become a feature in contemporary psychological and spiritual systems. The retrieval of the wisdom of indigenous peoples — whose contributions have been massively overridden, if not obliterated, by the rise of materialism in the dominant culture — and the exposure of the devastating societal effects on everyone when people are oppressed or overruled has been creatively and culturally liberating.

We might also see the global rise of authoritarian regimes and white supremacist ideologies as a more dangerous side of our collective travel in the winter signs.

Rising up through what is dense and dark, there appears to be an overarching mythic theme, but the threads in our personal Capricorn storylines are in different stages of telling, as I recently experienced firsthand. (1) As we well know, transiting Jupiter, South Node, Saturn, and Pluto are in Capricorn and will be joined on February 16th by Mars. The contracting, condensing, squeezing qualities of the last earth sign are working with each of us, sometimes most directly through the themes carried in the particular house of our natal chart where Capricorn dwells. We’re all climbing, falling to our knees, getting back on our feet, building strength in our bones (and flexibility in our knees) as we chisel away at what we perceive to be immoveable and solid, while simultaneously designing and welcoming a new version of ourselves.

Perhaps we are fine-tuning our sense of being on the threshold, wherein both endings and beginnings, the past and future, the inner and outer, are converging.

For a year (as of December 2019), Jupiter will be in Capricorn, and there are slight but perfectly useful openings in our perceptions or situations, or cracks in what has felt like an impenetrable wall of obstruction or darkness. Commanding Mars activates the whole last-earth-sign picture on February 16th when he enters Capricorn (until March 30).

But, enough of Capricorn for now. At the moment, I’m placing my chips in the watery world of Mercury’s station retrograde at 12°53’ Pisces, also on February 16th, and close to Neptune at 17°37 Pisces.

As much as Capricorn can signify materialism at its most dense, Pisces beckons the imaginal, the formless, and the great Beyond. The last water sign offers an easy entry to the reality that transcends what we see, feel, hear, taste,  and touch. Physicists now generally agree that 93% to 95% of the matter that makes up the universe is “dark matter” or “dark energy,” essentially what can’t be seen or understood. I think of it as the fertile, creative, and ever-present field that our experience of can be enhanced through meditation, devotion, ritual, plant medicine, the arts, and countless other portals. It is the realm of magic, intention, grace, and all unseen forces that guide our world. (2)

Which takes me back to why I chose to highlight February 16th in this blog. On this day, the exaggerated weight and urgency of the earth element (Mars joining the Capricorn planets) and the bottomless surrender and bliss of the invisible worlds (Mercury stationing retrograde in Pisces) are each strongly marked in the sky. Let’s enjoy the highest mountain views and the deepest waters we can find.

Have a good week, everyone.

(1) I spent time recently with someone in a harrowing situation, who has Sun, Mercury, and Venus in late Capricorn and Mars in late Pisces. Steadiness, calm control, and surefootedness were palpable qualities in the room, as was the sense of being in an initiatory experience. Since then, I have a new felt experience of the mastery inherent in the sign of the sea-goat. The sense of being on a mountaintop with a broad perspective was quite literal, as this person offered a deeply honest and realistic assessment of his life story. This happened to be a liberating moment in this gentleman’s life: when accomplishments were clearly realized, and there was no regret or self-recrimination, just a glorious acceptance of the finite nature of time in the physical body. I could also feel the presence of the ancient symbolism of the mountain goat who is half-fish, informed powerfully by the depths of the sea-goat’s tail, adept in the realm of emotions and undercurrents, and just emerging from some deep inner knowing. This was a precious peak experience, a culminating moment in a life story.

(2) This is the realm of shamanism and healing practices in many different lineages. This field is also perceived by Rudolph Steiner, and many others, as a land of invisible beings who thrive on human fear and anxiety while exacerbating spiritual distress and illness.