What a time it has been since August 16, 2022, when US President Joe Biden signed into law the Democrat’s hard-fought healthcare, climate, and tax package: the Inflation Reduction Act. The law directs a colossal $369 billion towards investing in renewable energy and reducing America’s planet-heating emissions.

“With this law, the American people won and the special interests lost,” Biden said. (1)

This powerful Aquarian statement by the US president aptly signifies the turbulent, changing world era we are in, that the larger planetary cycles are revealing to us, as we humans struggle to cope — and try to make some sense of it all. 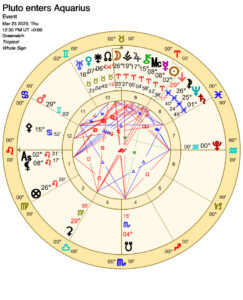 We will see major development  as Pluto completes his 2008–2024 traverse through Capricorn, and power (Pluto) shifts towards the people. This is a swing away from crumbling Capricorn institutions, plutocrats, oligarchs, and politics rooted in gaining material power and control through exploitation of planet Earth’s diminishing resources.

Next spring, Pluto’s journey through Aquarius (from 2023 to 2044) begins. The sign of the human collective, Aquarius symbolises the drive to pursue and promote ideals to create a fairer and more equitable world. It is highly rational, technological, and future-oriented: “Let’s get together to make the world a better place,” is an Aquarian motif.

The Jupiter–Saturn conjunction at 0° Aquarius on the winter solstice in 2020 (who chose that date?!) symbolised the end of this defining conjunction’s trek through the earth element (that began in 1803).  And it heralded the beginning of a new 200-year air era, heavily weighted towards Aquarius by Pluto’s imminent entry.

Along with other astrologers, whose primary interest is how larger planetary patterns work out on Earth, I’ve been fascinated — and at times awestruck — to see how the ancient maxim, “As above, so below … ” has played out so vividly in recent months. As Pluto transits the final degrees of Saturn-ruled Capricorn, the Capricorn-Cancer axis loses ground to the rising power of Uranus-ruled Aquarius and the Aquarius–Leo axis. This is a worldwide turbulent time between eras, and we have seen these symbolic energies play out “on the ground” quite clearly.

Here are a few highlights in which the interplay between rulers (Leo) and the people (Aquarius) can be seen with the dominant energy of the rising air era coming to the fore, and the “old order” crumbling and collapsing.

In the spring of 2022, Vladimir Putin’s Russian army invaded Ukraine, confidently expecting victory within days. Six months later, the enormity of his misjudgment is becoming increasingly evident as the tide of war turns in Ukraine’s favour, owing to the people’s courageous resistance — and solid Western support.

In early July, the UK’s then prime minister Boris Johnson finally resigned after a growing crescendo of scandal and popular dissatisfaction lead to mass resignations from his government, forcing him out. Following was the historic US climate bill in mid-August. And currently, the net of the US’s legal system appears to be tightening around former president Trump and his family.

Also, in Iran these past few weeks, protests and escalating civil unrest have been at the forefront. People, including women and schoolchildren, have demonstrated against the punitive medieval rule of male clerics, sparked by the death of a woman detained for breaking hijab laws.

Most dramatically, in the UK, on September 6, Johnson formally demitted office to Queen Elizabeth II, who welcomed Liz Truss as the new UK prime minister. Then, two days later, at age 96, the Queen died, fulfilling her Capricorn duty to the end. The ancient archetype of the death of a monarch has caused powerful ripples through our collective and personal lives, regardless of what politics we espouse.

The Queue — Aquarian Herald of the Air Era

For me, the most moving manifestation of the incoming Leo–Aquarius polarity as the Cancer–Capricorn era fades out, was observing the reaction of the UK public to our Queen’s death and short lying in state in Edinburgh, followed by the longer lying in state in London. An enormous flow of people filed past the Queen’s coffin, both in Scotland and in England, accompanied by thousands of citizens from all areas of the UK, as well as much further afield.

It was astounding that hundreds of thousands of people were prepared to wait all night in a queue, which ultimately wove its way through the streets of London for 4 to 5 miles in the days before Elizabeth’s state funeral on Monday, September 20. Aquarius — the people — came to pay their last respects to Leo — the monarch.

Striking, too, was the Aquarian “feel” to the famous queue. Many people expressed the view that being part of it was an event in itself. New friendships were made, people shared food and drink, and generally supported and entertained one another during the very long wait. Wouldn’t it be great to think of that community spirit growing stronger as Pluto enters Aquarius and hopefully turbo-powers our interconnectedness?

Now, we have to wait and see what next spring brings, but strong clues about the possible shape of the new era are already evident. People power is on the rise. Let’s hope that the enormous changes ahead will bring more light than shadow.

At 1:37 p.m., UK time, on Thursday, October 20, 2022, Prime Minister Truss resigned after 45 days of increasing turbulence and chaos — the shortest prime ministerial tenure in UK history. (2) The astrology of the resignation is stunning. The standout for me, in the context of Pluto shifting from Saturn-ruled Capricorn to Uranus-ruled Aquarius, is transiting Pluto exactly square transiting Venus (UK’s ruling planet), triggering Truss’s Mercury–Uranus–Chiron t-square. (3) 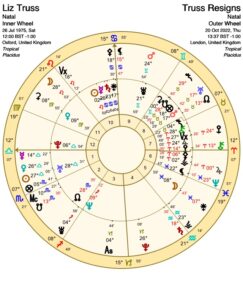 The main factor, from a number of contenders, which toppled Truss’s government, was a proposal in her first budget as prime minister to give huge tax cuts to the wealthiest people in the UK, funded by massive borrowing in a time of surging inflation and rising fuel costs. The British people, opposition parties, and even most of her own cabinet and members of Parliament, could not stomach this naked affirmation of capitalism. And neither could the worldwide money markets, which were again thrown into turbulence after only just slowly stabilising.

This dramatic, unprecedented event in UK politics can be seen as yet another example of the Capricorn into Aquarius plutonian power shift happening worldwide. What comes next for the troubled and divided UK?

A short-term, potentially stabilizing respite has been provided with Taurus Sun (and Mercury)  Rishi Sunak, elected unopposed by the Tory Party on October 24. (4) He was sworn in as UK Prime Minister on October 25 by King Charles III at almost the exact time of the South Node solar eclipse at 2° Scorpio. However, agitation for an early General Election is likely to continue as a substantial number of the UK public is very dissatisfied at being lead by a Prime Minister and a Tory Party which, in their eyes, has no popular mandate to govern.

In the meantime, Pluto inches ever closer to his first entry into Aquarius on March 23, 2023 — not an indication of troubled waters settling down in the UK or anywhere else, any time soon.

(2) Time given to Anne Whitaker by Victor Olliver, editor of The Astrological Journal, from a source watching Truss’s resignation speech.

Anne Whitaker has been an astrologer since the 1983 Jupiter-Uranus conjunction in Sagittarius and holds a diploma from the Centre for Psychological Astrology in London (1998) as well as several academic qualifications. She no longer does astrology readings, but mentors international students studying with reputable courses, most notably MISPA — the Mercury Internet School of Psychological Astrology. Her latest book is Postcards to the Future: Mercurial Musings 1995–2021 — an acclaimed collection of 60 essays, articles, and columns from the many publications to which Anne has contributed over the years, including the UK’s Astrological Journal, The Mountain Astrologer, Dell Horoscope and astro.com. “Postcards…” is available on Amazon, in London at The Astrology Shop and Watkins Books, and at wessexastrologer. Anne can be contacted at info@anne-whitaker.com.