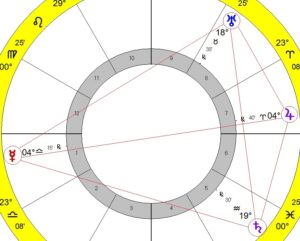 1) Mercury turns retrograde on September 9 at 8º55’ Libra. This month, Mercury is carrying the archetypal message of three outer planets: Jupiter, Saturn, and Uranus (see #3, #4, and #5 below). In essence, Jupiter is at the midpoint of the ongoing Saturn–Uranus square as Mercury relays each planet’s agenda. Mercury in Libra naturally seeks collaboration, partnership, and alliances between contradictory or even antagonistic opinions. That process may unravel or get sidetracked during the three weeks of Mercury’s retrograde phase. The 17th, 18th, and 19th are exceptionally active as Mercury aspects all three outer planets. Be ready for opportunities (Jupiter), obstacles and delays (Saturn), and surprising or unexpected news (Uranus). Make sure you get the facts correct before making any important decisions. 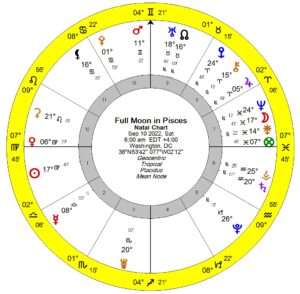 2) The Full Moon in Pisces takes place on the 10th (5:59 a.m. EDT). In the northern hemisphere, this “Harvest Moon” is associated with the transition from sun-filled summertime vacations to a more work-oriented ambience. While that still holds true, this Full Moon for many will focus on relationship patterns. Juno, the marriage asteroid, is conjunct the Moon in Pisces and, due to its retrograde motion, is heading back into a square with Mars in Gemini. The Full Moon highlights this Juno–Mars square from September 6–14 as committed partners (living together or actually married) sort through divergent opinions and plans. For some, discussions may get intense and ultimatums issued. 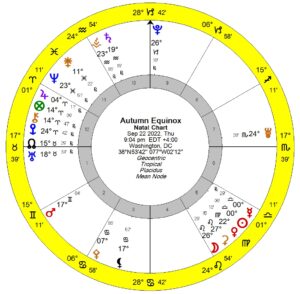 3) The autumn equinox on the 22nd (9:04 p.m. EDT) sets the tone for the next few months, and the horoscope for this astro event contains at least three major themes. First, Jupiter is octile (45º) Saturn on the 21st and within effective orb from the 8th through the end of the month. One challenge herein is how well or effectively you express yourself (Jupiter in Aries) within your tribe and circle of friends, or on social media (Saturn in Aquarius). Two more themes are described below (#4 and #5) and involve Uranus aspecting Jupiter and Saturn. The tight interplay between these three outer planets implies that transpersonal events are shaping daily routines for most everyone. Historic social, economic, environmental, and political trends are reaching a tipping point.

4) Jupiter is exactly octile (45º) Uranus on the 28th, but is an active dynamic from the 19th through the first week of October. Jupiter’s pioneering spirit while in Aries gets a quantum boost by aspecting Uranus, urging those under this duo’s influence to break away from stagnant situations. Is this the time to exit a boring job, a dead-end relationship, or an uninspiring location? Jupiter–Uranus seeks dramatic changes when the old ways just don’t hold much promise for growth and fulfillment. However, beware of impulsive actions that you may regret later. Change for the sake of change gets you nowhere.

5) Saturn squaring Uranus is a force to reckon with this month and into October. Although they don’t make an exact hit due to their retrograde cycles, they do remain within a one-degree orb from September 15–October 23. Those of us with prominent placements in the 18º–20º range of fixed signs (Taurus, Leo, Scorpio, Aquarius) will already be feeling the pressure of this astro event. Saturn in Aquarius supports traditional systems of interaction, while Uranus in Taurus upsets or radically overturns tried-and-true practices. If you tilt carelessly too far toward one, the other will catch you off-guard. Another issue presented by this square is how do we collectively (Saturn in Aquarius) deal with the shocking shifts to Mother Earth’s climate (Uranus in Taurus)?