Regular readers will recall that last month we gave astrology skeptics some bad news: the astrological revival is only just beginning. This month, there are more ill tidings for the “celestially challenged”: astrology looks set to invade everyday life — and in ways that may be difficult to ignore.

The celestial art is booming right now, but it arguably remains contained within its “spiritual” confines. Let’s remember though, that the millennials and zoomers who’ve embraced astrology so enthusiastically in recent years are increasingly taking on positions of power and leadership in the “mundane” world. They’re running businesses — or running for office. Naturally, they’ll want to use astrology to help accomplish their goals and create products and services that make use of its wisdom. And they’ll inevitably want to be open about their beliefs. Astrology’s relevance to spiritual questions is well-known. But it can have just as much to say about practical matters: money, sex, food, and shelter. These are areas of life that fall under the domain of Venus’s sign of Taurus. And there are compelling reasons to think astrology is about to take on a Taurean flavour. In this article, I’ll show why I think that’s the case, with a dive into the past century of astrological tradition.

Uranus and the North Node: The Astrological Bellwether
I recently learned of a fascinating theory about trends in astrology from Hermetic Astrology Podcast host Gary Caton on Twitter: 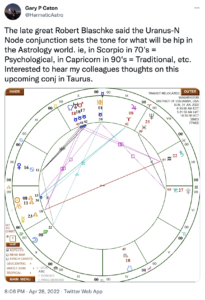 Mercury is the planet traditionally associated with astrology, but Uranus, named for the sky god of Greek myth, is also closely linked to the art. The North Node, through the influence of evolutionary astrology, has taken on intimations of destiny — what must come into being. Putting these two significators together, we seem to have an indicator of where astrology as a practice is going.

I found this idea interesting enough to do a little research. Uranus and the North Node conjoin every 15 years or so. Here’s a list of their conjunctions going back to 1900, courtesy of Astro-Seek: 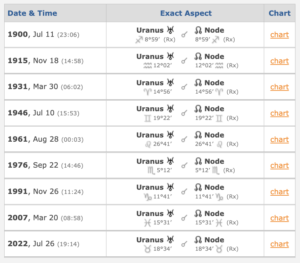 With a trusty copy of Nicholas Campion’s A History of Western Astrology Volume II in hand, I looked into astrology trends through Uranus–North Node periods. While it’s hard to get a picture of how the tradition was actually practised in the consultatory trenches during the past century, highlights of recent astrological history do seem to conform closely to Robert Blaschke’s principle (as referenced above in Gary’s tweet). Here’s what I found:

1900–1915 — Sagittarius: Alan Leo and “Theosophist” Astrology
Sagittarius and its ruler Jupiter are associated with faith and the figure of the preacher. And so it was that this astrological period was dominated by the influence of British astrologer Alan Leo. Leo was a Theosophist, a new religion founded in New York in the late 19th century by Russian mystic Helena Blavatsky and associates. The faith melded ideas from Christian/Western occultism with others taken from Hinduism and Buddhism. Crucially, Theosophists believed the world was headed towards a new spiritual golden age — yes, the famous New Age that infused so much 20th-century spirituality in the West — and that it was their job to prepare the ground for the great changes to come. These ideas suffused Leo’s astrology, which emphasised the concept of “spiritual evolution.” We see here the presence of zealous Sagittarius in the astrological trend of the time. Astrology melded with a faith, with results that, for better or worse, influenced the practice for the century to come. Also, in a departure from the tradition, Leo placed a heavy emphasis on the Sun’s placement in natal charts, and arguably set the stage for the coming dominance of Sun-sign astrology.

1915–1931 — Aquarius: the Hamburg School and Uranian Astrology
More than any other sign, Saturn-ruled Aquarius is the sign of the scientist. From around 1919, German astrologer Alfred Witte began to develop a new form of astrology that he claimed was based on “scientific” principles. He experimented with various traditional astrological techniques, accepted and rejected them according to what he felt was valid, and worked in an empirical “scientific” fashion. By abandoning tradition and establishing new rules — hello Aquarius — Witte introduced techniques like midpoints and hypothetical planets, the so-called Trans-Neptunians, to his system. In 1925, he formalised his work by founding the Hamburg School of Astrology. The system was later renamed “Uranian Astrology” when it was introduced to the US. Whether or not you use modern rulerships, it’s hard to avoid noticing Uranus’s modern association with Aquarius here.

1931–1946 — Aries: A Royal Horoscope and Sun-Sign Columns
On August 24, 1930, Britain’s Sunday Express published the first example of an unusual new style of newspaper column. The paper commissioned an astrologer named R. H. Naylor to write an article making predictions about the life of newly born Princess Margaret based on her natal chart. The column was wildly popular, and the paper commissioned more: the newspaper astrology column was born. Interestingly, the Uranus–North Node conjunction that preceded this development took place in the second decan of Aries. Austin Coppock, who has written extensively on the decans, called this decan “the crown” and explicitly labelled it a “royal face,” given that the Sun’s exaltation degree is found within its confines. Around the same time that Naylor’s article was published, Sun-sign columns began to appear in newspapers in the United States. The Sun’s exaltation in Aries shone through once again.

1946–1961 — Gemini: The Gauquelin Studies
During this period, French psychologist Michel Gauquelin began to publish the results of his studies of the lives and birth charts of thousands of people; and in 1955, he published his book, L’influence des astres (“The Influence of the Stars”) His work seemed to prove the existence of what came to be called the “Mars effect” — a purported statistical correlation between a prominent Mars in the natal chart and an eminence in athletics. He found similar effects with other planets: Saturn was associated with scientists and the Moon with writers, for example. The studies remain some of the best “scientific” evidence validating astrology to date, although Gauquelin also said he couldn’t verify most of the tenets of traditional astrological technique. Styling himself as a “neo-astrologer,” he said a new astrology should be founded based only on what could be proven in “scientific” fashion. In the big data he employed, we see the signature of information-hungry Gemini, and in his denial of the claims of both skeptics and astrologers, we see the hand of Mercury, whose traditional function is to contest and destabilise.

1961–1976 — Leo: Linda Goodman’s Sun Signs
By the 1960s, newspaper horoscopes and Sun-sign astrology were already common. And in 1968, an astrologer named Linda Goodman published her book Sun Signs. Goodman lyrically described natives of each of the 12 signs in ways that captured imaginations across the globe. The book became the first astrology book to make the New York Times bestseller list and today remains the bestselling astrology book of all time. So many people read Sun Signs that the question “what’s your sign?” found its way into the common lexicon and even entered the domain of cliché. Astrology was, more than ever, all about the placement of the Sun. Interestingly, we can trace three phases of this development by way of Uranus–North Node conjunctions through the three fire signs. The trend began with Alan Leo’s work (Sagittarius), then the Sun-sign column came into being (Aries), and then Sun Signs landed the knockout blow (Leo).

1976–1991 — Scorpio: Liz Greene and Psychological Astrology
Scorpio is associated with penetrating depths of insight and an unquenchable yearning to know what lies beneath the surface. As such, it’s linked to psychology, a scientific discipline that, more than any other, is concerned with understanding what makes people tick. And so, this period covered the golden age of psychological astrology, when figures like Liz Greene and Howard Sasportas married the psychoanalytic thinking of C. G. Jung with the celestial art.

1991–2007 — Capricorn: Project Hindsight and the Traditional Revival
In 1993, the “three Robs,” Robert Schmidt, Robert Hand, and Robert Zoller, launched Project Hindsight, an initiative to translate texts of traditional astrology dating back to the Hellenistic period. A revival of traditional astrology — especially medieval astrology and the renaissance horary astrology of William Lilly — had already begun by this time, but Project Hindsight sent the trend into overdrive. The translation of Greek texts into English, which remained undeciphered for two millennia, brought old thinking and ways of practising astrology into the modern tradition. Here, we’re clearly in the domain of Saturn’s sign of Capricorn, with its connection to ancient wisdom and tradition.

2007–2022 — Pisces: Magic, Mysticism, and the Boundaries Come Down
While traditional astrology has continued to flourish in this period, there’s also been an explosion in the practice of astrological magic. With concurrent booms of witchcraft and all kinds of divinatory practices during these years, there’s been a hefty injection of Piscean mystic tendencies into astrological practice. We should also acknowledge the sizeable growth in the diversity of astrologers — in terms of race, gender, and sexuality — who have become visible and taken on leadership roles in recent years. Pisces abhors boundaries.

2022–2037 — Taurus: An Era of Practical Astrology?
In July, Uranus will conjoin the North Node in Taurus. Considering correlations summarized thus far, what does this conjunction mean for astrology? Well, the sign of Taurus is associated with practical, material matters: money, sex, food, and shelter, among other things. Therefore, we can expect growth in areas like financial astrology (“What should I do with my money?”), locational astrology (“Where should I live?”) and synastry (“Who should I relate to?”). Astrological herbalism, already becoming popular, also fits the Taurean bill. Perhaps biodynamic farming, which takes astrological cycles into account in the cultivation of crops, will also make inroads. But as I wrote at the top, I suspect we’re going to see changes to astrological practices that go beyond these particular areas. In this Age of Air, I doubt astrology will remain contained in its “weird corner.” It’s going to invade everyday life in a much more tangible way. In other words, I think the Taurus conjunction may well signify the beginning of astrology’s widespread integration into the mundane business of everyday life. Sorry skeptics — Again!

Dan Waites is a consulting astrologer, researcher and content creator focused on mundane and natal astrology. He says: “My goal is to use astrological wisdom and historical research to understand the times we’re living through and help more people cross the threshold into a magical cosmos.” His writing on mundane astrology can be found at danastro.substack.com, his YouTube channel “World Astrology Report” and his website for bookings and contact: danwaitesastrology.com