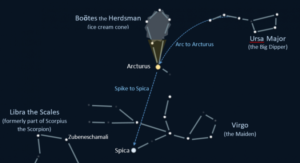 If you were to step outside on a clear night and look up, you would be hard-pressed to miss Spica and Arcturus. They are among our sky’s 20 brightest stars and they appear in a diagonal line, very close to one another. Often, if you happen upon one, you are bound to see the other not too far away.

In fixed star literature, any relationship between these stars goes largely unmentioned, especially as they are part of different constellations. It wasn’t until I came upon their Arabic names that I even considered them a pair. Arcturus used to be known as al-simāk al-rāmiḥ, “The Uplifted One with a Lance,” while Spica was al-simāk al-ā‘zal, “The Unarmed Uplifted One.” It is clear that both of these stars have a sacred, “uplifted” meaning, but whereas Arcturus is defended, Spica has no sword to protect it. Upon further research into their classic significations, their relationship to each other began to unfold.

I will discuss the meaning of each star on their own and then unpack why these stars deserve to be seen as a pair. I hope to invite you into a deeper relationship with these two stars and the dynamics they represent. Although they are grand energies, the stars also reflect our own lives. By studying them, may we better understand ourselves.

Spica
Spica is a white binary star in the ear of wheat held in the hand of the Virgo constellation. Before the zodiac was recognized, this constellation was most often associated with the universal Goddess “and is considered by some astronomers to be over 15,000 years old in human awareness.” (1) The Milky Way was said to have formed from the grains that dropped from Spica’s wheat sheaf. The star retains this agricultural imagery in astrology: Manilius says that when this star is rising, “it engenders a love of fields and of agriculture.” (2) He describes the actions of such a native: “putting the corn beneath the rock which will crush it, he will turn over it the upper millstone, moisten the flour and bake it at the hearth; he will prepare men’s daily food and mould the selfsame substance into a host of different shapes.” (3)

Here we see that Spica is not just about agriculture but the process of turning crops into something for human consumption. “Upon him whose strength is perchance enfeebled by toil,” Manilius explains, “it bestows skill in occupations without which there would be no bread or any benefit from the grain.” (4) As our culture has moved away from solely agrarian forms of work and consumption, Spica’s contemporary meaning shifts to include whatever turns raw material into something useful.

Brady associates Spica with “gifts to humankind,” or more specifically, “knowledge and insights which are respected,” most often for being useful in some way to the human world. (5) She sees “potential for brilliance in whatever it touches in a chart.”(6)

Multiple texts also point to the goddess imagery of Virgo, Spica’s constellation. Manilius likens the kernels of an ear of corn (another image often tied to Spica) to paneled ceilings or cells, and thus relates this star to “a man who carves panelled(sic) ceilings in the sacred temples, creating a second heaven in the Thunderer’s abode.” (7)

Anonymous 379 says that Spica “makes hierophants, greatly honored priests, philosophers,” and “interpreters of certain sacred rites.” (8) If a woman is born when Spica is prominent, “it makes priestesses of the goddesses Demeter (or Meter), Persephone or Isis, or experts in hierophantic matters, mysteries, or sacrifices.” (9) Spica represents the potential for a connection with the sacred and shows an affinity with both skills of the earth and skills of spirit. Indeed, who else but the gods bestow us with such talents?

Arcturus
Arcturus is part of the Bootes constellation. While not as ancient as Virgo’s imagery, the existence of this constellation dates back 3,000 years. The figure is of a man who holds a sword in one hand and a plow in another — a hunter who also farms. Arcturus is the third-brightest star in the sky, which accounts for its inclusion in virtually all star-related literature throughout history.

Brady traces its usage to the harvest calendar “as its acronychal and heliacal risings once corresponded to the important dates in the farming year.” (10) Around 700 BCE Hesiod wrote that when “rosy-fingered Dawn looks upon Arcturus, then, Perses, gather your grapes and bring them home.” (11) But there’s a sense with this star of being on the hinge between worlds. The Athenians saw him as a “leader of his people who, having fallen on difficult times, invented the plow, which he used to ease his labors.” (12) We see agriculture being highlighted as a tool used for the ease and advancement of humanity. More specifically, Arcturus is the bridge between the old and the new, as well as the ability to see novel solutions where others can’t. Brady, then, connects this star to “guarding, learning, teaching, leading-leading and protecting people as they embrace a new lifestyle.” (13) While Spica’s gifts have a divine tinge, the gifts of Arcturus are decidedly more terrestrial, often responding to human need and investing in what advances humanity.

Oftentimes, Arcturus cannot even claim ownership over its gifts. Of those born under this star, Manilius says “fortune herself makes bold to entrust her treasures, so that the wealth of monarchs and temple finances will be in their keeping.” (14) What Arcturus possesses, it does not truly own. but is looking after for someone or something more powerful. The word “stewardship” comes to mind for this star; it identifies something precious and gives itself the responsibility to take care of and protect it.

The path of such stewardship can be a stormy one. Indeed, many seamen and farmer s saw Arcturus as a portent for heavy rains and destructive storms, in part due to its tawny color. Anonymous 379 says this star is of the nature of Jupiter and Mars and that is makes its natives “independent, outspoken, contentious…likely to overcome, the scourge of their enemies, with many possessions and great wealth, great-souled and honor-loving, but not always coming to a good end” as well as “fond of hunting and of horses.” (15) There is a desire to plunge into the heart of things and use one’s will to reach victory, though this process necessitates a struggle. But, with the influence of Jupiter, when a proper belief or cause is the impetus for Arcturus’s use of its weapon, success can be achieved. What is a worthy cause? I believe the pairing of Spica and Arcturus can help answer that question.

The Uplifted Ones
Let’s revisit their shared Arabic names: al-simāk al-rāmiḥ for Arcturus and al-simāk al-ā‘zal for Spica. Their shared word, simāk, comes from the root س م ك‎ (s-m-k), meaning “to be elevated or lofty,” “to be supported or held up,” or “to sustain.” Simāk is also used to signify a source of sustenance, which ties in with the agricultural aspects of these stars. Here we see an interesting dualism — on one hand, these stars are uplifted, they signify something sacred and worth elevating. On the other hand, they provide the support and nourishment upon which others can be uplifted, i.e., the invention of agriculture and the harvesting of cultivated crops.

Arcturus’s name shows that this star accomplishes this task in part through action. Al-rāmiḥ is the Arabic word for “lancer” or “one who is armed with a lance/pike/spear.” Words that share its root include ramaḥa, meaning “to thrust, to pierce” and rimāḥa, “art of spear-making.” This name corresponds with Bootes’s imagery of a farmer with a sword.

Spica, by contrast, is al-simāk al-ā‘zal or the uplifted one who is unarmed. More specifically, its root is related to the acts of separation and independence, as well as being unarmed as a result of withdrawing or leaving a conflict.

Here we see two different versions of sustenance: one, through plunging into the heart of the world, sword in hand, ready to protect and defend what is most precious. In the other version, support is gained through withdrawing from the world and protection is gained from solitude rather than violence. 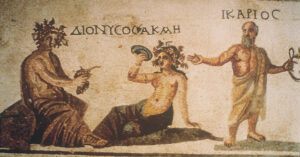 Fortunately, we have a myth associated with these two stars to further their connection. In Greek lore, the Bootes asterism represents Icarius, the first mortal to make wine. Upon sharing his creation with a few shepherds, however, his guests “grew so drunk that they saw everything double, believed themselves bewitched, and killed Icarius” (16). His death was witnessed by his faithful dog Maera (who would later become the Canis Minor constellation), who then found his daughter Erigone, and brought her to her father’s corpse. The maiden was so devastated that she hanged herself. No one else witnessed her death but “many Athenian maidens were found hanging from the pine one after another, until the Delphic Oracle explained that it was Erigone who demanded their lives” (17). Through this divination, Erigone was immortalized in the sky as the maiden Virgo constellation, alongside her father.

Here we see a prime reason for why Arcturus is armed. This star is deeply enmeshed in this world in order to share its novel ideas and creations. But, as the story of Icarius demonstrates, people are not always ready for what is new. They may be whipped up into a frenzy, as the shepherds were, or be threatened by the new and want to quell it. To walk the path of Arcturus, one must have the grit to plunge headlong into the world of people and defend your life-giving ideas, with all the messiness that entails.

Erigone, by contrast, gets her way through indirect action. The Oracle of Delphi, who receives messages by channeling the God Apollo, was able to transmit her will to humankind from the heavens, so her unwitnessed sacrifice did not happen in vain. Manilius says this star will “confer a tongue which charms, the mastery of words, and that mental vision which can discern all things, however concealed they be by the mysterious workings of nature,” skills which all require subtlety and refinement. (18) He also mentions that “bashfulness handicaps the early years of such persons, for the Maid, by holding back their great natural gifts, puts a bridle on their lips.”(19) You can’t force the gifts of Spica. They require a delicacy and interiority and move not through force but through spirit and care.

That is what Arcturus’s proximity promises Spica: protection so that it may stay unguarded and connected with both the gods and the land. In exchange, Spica confers onto Arcturus a worthy, sacred cause for its might. If you have either or both of these stars touching your nativity, you must consider both what ideas or skills you have to offer the world as well as how you will protect your precious gifts.

If you ever get lost, just look up — these two bright stars will help lead your way with grit and grace.

Chloe Margherita is an astrologer, tarot reader, poet and artist living on unceded Cowlitz and Clackamas land in so-called Portland, OR. “I study the language of the stars because I want to help re-enchant our relationship to our inner and outer worlds. I want people to have trust that they live in an intelligent, watchful universe that mirrors their own inner life. I want people to see their innate wholeness and beauty; that they are divine exactly as they are.” Find her at chloe-margherita.com. Email: chloe.margherita@gmail.com.