A picture of the exceptional solstice skies: Astronomy Essentials.

And an inspiring list: 8 Architectural Marvels Inspired by the Summer Solstice:“Constructions around the world — dating from between circa 3000 B.C. and 1976 — that were each designed to align with the sun.” The list includes: Nancy Holt, Sun Tunnels: 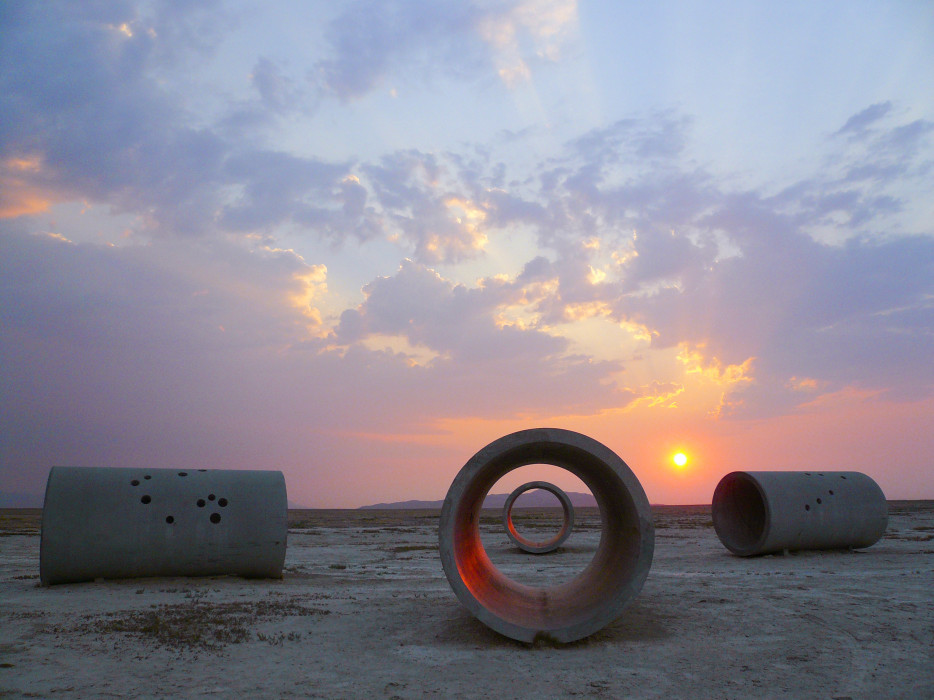 “The late American land artist Nancy Holt said that the idea for Sun Tunnels came to her while watching the sun rise and set in a remote valley in the Great Basin Desert.”

This entry is a slightly edited excerpt from Cathy Pagano’s blog (link below). 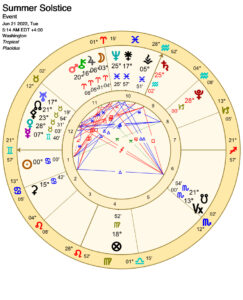 This year when the Sun enters the sign of Cancer, the Aries Moon is in a waning square to the Sun. The waning square indicates a “crisis in consciousness” — a time of maturation and awareness of what you have already created and imagining what you want to create in the future. It’s a time to slow down and reflect and recharge.

The Sabian symbol for the Sun at 1° Cancer is: On a ship sailors lower an old flag and raise a new one. Rudhyar states: A radical change of allegiance exteriorized in a symbolic act: a point of no return.

As the wheel of the year turns at the solstices and equinoxes, we are energized to act.

The Sabian symbol for the Moon at 4° Aries is: Two lovers strolling on a secluded walk. Rudhyar states: In order to respond fully to the potentials released by a sense of identification with a greater Whole, human beings need to be whole ourselves.

As you can see, we keep coming back to two issues: how do we unite our inner feminine and masculine energies (Yin/Yang) to become whole in ourselves and how do we act out of that wholeness for the good of the Whole?

Cancer is the sign associated with Motherhood and we know that a mother will do anything to protect her child (as the mother in Uvalde, Texas did). Perhaps we need to stop supporting patriarchy and start working to make sure that all our people are safe and protected. Aries is the protector!

Beginning with the solstice (until the fall equinox) we are in a time to think about new allegiances. This is important because on the US election day (November 8) there will be a total lunar eclipse in Scorpio involving wonderfully disruptive Uranus; we can foresee that there will be dissension about the elections results. The only way to stop the take over of our democracy and change it is to engage in the system. Transformation from within and without. 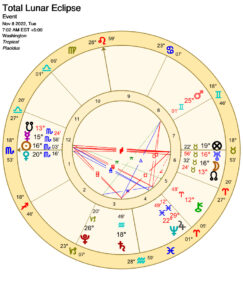 The inner wheel is the US natal chart. The outer wheel shows the secondary progressions for November 8, 2022. 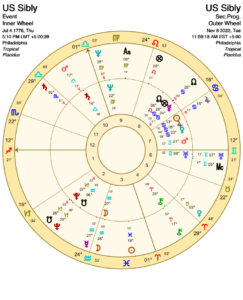 On election day America’s progressed Moon is at 28°10’ Aquarius just past the natal degree once again. (1) The Moon symbolizes a nation’s people and We the People are remembering our freedom. If we want it.

I hope the blessings of summer solstice will bring you joy and abundance just as they bring you the responsibility to grow your “garden” well.

Enjoy the Sun stand-still time, everyone!

The Charts of Roe v. Wade