Tem Tarriktar was my friend for 30 years, and saying goodbye has been very, very hard. From my perch as editor of the TMA blog, I want to offer a few thoughts from this sliver of Tem’s enormously creative world. 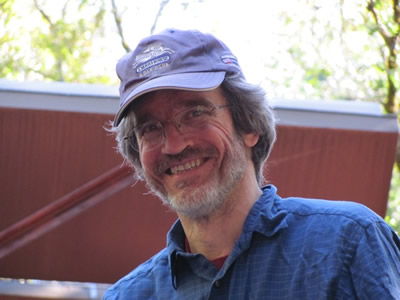 I have a thought about him that captures a bit of how I experienced this lovely man. I remember an image from an old book on esoteric astrology that described the qualities of the sign of Leo. We easily recognize and admire those people with this sign prominent — Leo the Lion is the king of the beasts, after all, and one of the earliest recognized constellations, having been documented by the Mesopotamians. It is also one of the largest and most easily identified constellations in the sky, and those born with the Sun in Leo often have a nobility and regality or a brilliance that we look up to. This bright being also casts a long shadow. This can be thought of as an “ordinary” Leo; however, in this hint from esoteric lore, the spiritually “advanced” Leo engulfs us all in the warmth and generosity of his heart. We are no longer merely admiring the undeniable brightness of the Leo, but rather we are all included in the loving embrace and awareness of the Leo’s love. That is how Tem was to me.

In 2011, when I was bereft at the passing of our friend, Robert Blaschke, Tem said something to me, in his gentle way, which was deeply consoling: “Some people are irreplaceable.” That is surely true, and I take solace in those words now. Goodbye, Tem, and thank you for everything. It will never be the same without you.

Here are some early tributes to the founder and publisher of The Mountain Astrologer magazine. Many more are forthcoming, including remembrances from his close associates at the magazine and his beloved wife, Kate.

On July 8, 2019, at 2:10 PM, Tem Tarriktar, human being extraordinaire, passed back into the spirit world that his 12th-house Sun knew so well. Almost midway between the Cancer Solar Eclipse on July 2 and the Lunar Eclipse on July 16, we lost a beacon in our astrological community, and, as is the case with eclipses, our world changed.

No One
understands
God’s workings (especially mystics)
Why
Things happen
and the ripples created
that touch everyone so deeply
The reasons live
in a dimension
nobody but silence visits
Later, the best we can do
is to look back at the path
of rubble from God’s
annihilating Love

Tem was a triple Leo, and he loved deeply — you could see it in his dancing eyes. He left his body with the love of his life, Kate, her sister Fran, and his brother-in-spirit and devoted friend Bo by his side. Jupiter was in trine to his Leo Sun-Ascendant, and Uranus was on his MC.

Do not forget who
you are
as a soul
Not this flutter of events
Not this fragile form
Don’t leave your heart
to wander
without a center
Speak from soul
Give and receive from this rock-throne
You are a rich, colorful, and
dynamic Peace
an unexpected Joy
a silent Love
Don’t hold back
No one is keeping score

Tem did not hold back. He had a gift to deliver, and in one sense, he was keeping score. On June 16, 2018, issue 200 of The Mountain Astrologer was sent to the printer. Each issue was a labor of love, and Tem looked like he had given birth after each one. His Mercury and Jupiter in Virgo made sure that every issue was on time and as perfect as possible, which took every ounce of his energy. The publication that began as a few mimeographed pages in 1987 had become, in the words of Henry Seltzer, “a world-renowned and widely respected institution.” Tem had succeeded in bringing the “ancient art and timeless wisdom of astrology to the world … as a vital aid to society’s evolution.” Bruce Scofield wrote, “Tem’s legacy is immense. He has done the heavy lifting — elevating a public understanding of astrology from stupid ‘horoscopes’ to an accessible nuts and bolts understanding of the full range of the subject.”

After more than 30 years of tireless dedication, Tem received the coveted Regulus Award in 2018 for his contribution to the Professional Image of Astrology. Ever humble, he wanted to acknowledge his staff as equally deserving, especially TMA’s senior editor, Nan Geary. He had previously declined other award nominations because he couldn’t include his staff.

As our community learned of Tem’s illness and merciful passing, well wishes and condolences poured in from those who had the good fortune to know him personally. Phrases like, “Ray of light in my life for decades, warm spirit and generous nature, wise and gifted, intelligent and calm presence, kind, funny, creative, your steady hand has held the lantern for many a new astrologer, Tem’s life work has been invaluable, a strong mentor to so many — even if he didn’t realize it, a loving and dedicated soul, Leonine nobility at the height of service.” If there is anything good that came of Tem’s illness, it was that he felt the love and support of the community that cherished him. Even then, his humility was present. One night at the hospital, when I wanted to read him some of the many messages and accolades he’d received, he sweetly smiled at me and said, “Only one or two.”

Hundreds of messages came in from those who hadn’t met him in person as well. Michele Adler’s beautiful comment represented the sentiment of so many: “Tem and I never met in person, but I think of all the people who never met him in person, and still were highly influenced by him. I am a better astrologer for what I learned and still learn through The Mountain Astrologer. If the chronicles of astrology are ever written for the 21st century, Tem’s name will be prominent, and his presence will still be felt after all of us are gone. My prayers and thoughts are with him and his family now, as well as heartfelt gratitude for Tem’s well-lived life.”

Like a storm
changes everything
in the desert
The silent Soul not lost, not dead, is waiting for rain
and the Unknowable
which will rise up and take you
or inform you in the smallest, quietest ways
that you are the rain
unexpected
empty
open
free

I first met Tem and Kate at one of our NCGR meetings in Sacramento. It felt like we had royalty amongst us — even though Tem was not aware of it, his Leo energy was apparent. Subsequently we became good friends. When I learned that he didn’t have time to devote to advertising for the magazine, I offered to help. My Ascendant and Venus conjoin TMA’s Ascendant, and my Sun is on TMA’s 0° Aries North Node. Tem and I share a reversed Sag-Gemini nodal axis, and, despite my Mercury in Pisces opposing his Mercury in Virgo, an easy energy flowed between us. During one of our quiet talks at the hospital, Tem mentioned that he wanted to write a book, and not until I was preparing for this tribute did I realize that his book was already written. In addition to his legacy of The Mountain Astrologer, it is through his poetry that his spirit and wisdom will live on.

Fly high, my dear friend, and know that your presence here left an indelible mark on our hearts and minds. You lived up to the potential of your chart and achieved the highest octave of Leo: loved and admired by all.

With a sad heart that is missing a “life’s long friend,”
Linda Kubota Byrd

Tem’s longtime friend Greg Bogart wrote A Tribute to Tem Tarriktar (with some wonderful biographical details) for Astrodienst. Greg ends his tribute with these words: “Tem’s legacy is not just a magazine, but a stronger astrological community. What a beautiful flowering his life attained. Now he returns to the Source, having completed so beautifully the mission he was sent here to fulfill. All of us who love him will miss him and always remember him. May he go in peace, knowing he has generated much good karma on planet Earth.”

Here is Chris Brennan’s podcast interview with Tem from March 27, 2018, followed by a transcription of the interview that Chris kindly arranged.

The Astrology Podcast: Tem Tarriktar on The Mountain Astrologer

Comments are closed for this article!