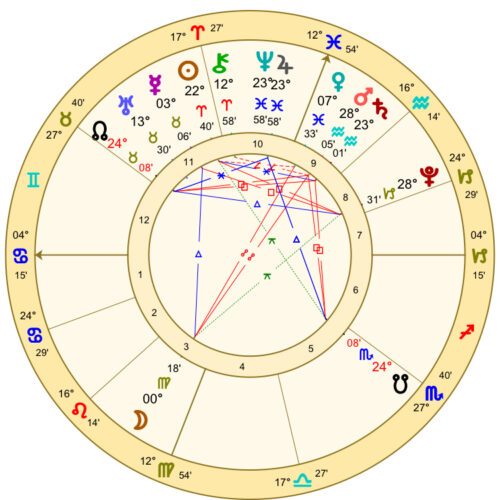 On April 12, 2022, Jupiter converges with Neptune to form a once-in-every-13-year conjunction. This cosmic intersection is best described as monumental because both planets are in rulership: that is, Jupiter is the traditional ruler of Pisces, whereas Neptune is deemed the modern ruler. Therefore, we can imagine that this might be the beginning of a cycle of philosophical, motivational, and spiritual development; it may also mark the beginning of a period where misplaced idealism proliferates. In this article, I will outline an array of different and diverse scenarios that could all transpire.

This auspicious conjunction is certainly timely, especially in light of the recent troubles throughout the world. Hopefully, it will help free us all from the draconian restrictions associated with Covid-19, and it may well allow us to dream of a much brighter and better world — a world in which we are liberated from the abstract utopianism that has spawned a new type of fear, and a widespread feeling of powerlessness and hopelessness.

During the pandemic, a multitude of conspiracy theories have arisen from out of the depths of this fear and come to the forefront within numerous societies. Most of these conspiracies have pointed the proverbial finger at suspicion over the rapid development of the vaccines (and their potential negative effects on the body), resulting in governments and scientists becoming sources to mistrust.

During and after the Jupiter–Neptune conjunction, more details may emerge about people who have been harmed as a result of the vaccines; it is also possible that propaganda concerning the use of the vaccines, being disseminated by the growing anti-vaxxer movement, may well escalate further — to the point of social unrest. In the advent of this approaching conjunction, we are already witnessing such events in the UK.

Another consequence of the Jupiter–Neptune conjunction might be an increased vulnerability to suggestion, or to inflated deception. We may be told exactly what we want to hear, or hear only what we want to hear. There is also a danger of falling into a trap of scandal and collusion, particularly regarding officials in the public eye. The Jupiter–Neptune conjunction may also be the catalyst for a sharp rise in gambling addictions or drug- and alcohol-related issues, as some people sink further into illusion or disillusionment.

However, the adventurous Jupiter–Neptune conjunction can also be deemed a creative hub for the exploration and orchestration of innovative, artistic, imaginative, and ingenious aspirations and undertakings. As these two planets merge, they have the capability to infuse the human heart with renewed insight. I feel many individuals will discover a wholly new direction to follow, or encounter a simple and fundamental desire to make the world a better place. Many will feel an obligation to fulfil a particular destiny in this regard, such as sending out light for global healing.

I also suspect there will be a surge in world travel, as people seek creative answers to their long-probing questions. Some people may decide to travel to the far East, for example, seeking spiritual enlightenment. This is especially true in light of the now-dissipating Covid-19 pandemic, which has led many souls to seek clarification on the mysteries of life, to understand the deeper truths of who and what they are, and to further their spiritual development.

As conventional religions face turmoil and further disintegration, group spiritual meditations may also become an important feature, as many become disillusioned and seek alternative forms of enlightenment and knowledge. I suspect many more will turn to alternate forms of healing, such as chakra balancing, homeopathy, and acupuncture. Research suggests that interest in astrology is even on the increase. [1]

At its most hopeful, this celestial period will mark a transcendent and cultural renaissance across the globe, particularly in Australia, New Zealand, and the US — where there is a growing and noticeable despondency towards the authorities — mainly in light of how the Covid pandemic has been handled. Amongst these nations, many will seek a higher journey towards self-fulfilment. In earlier centuries, these countries were regarded as “evolutionary hubs,” and the trend toward seeking a higher journey will, I believe, escalate across the four corners of the world as Jupiter imparts its lifeblood of prosperity through idealistic and imaginative Neptune.

From West to East, variable and rebellious changes are imminent. For a time, a great uncertainty may be present, but humankind can prevail. For all the countries in the world, Jupiter’s infectious programme of expansion will be imparted via Neptune’s trident in the form of ethical and moral magic. It is time to wake up to a new reality, which will be further energized when Jupiter transits into Aries on May 10, 2022.

I predict that a new light will dawn on the horizon of hope, as Jupiter lifts the fog of Neptune across the world, and people will finally be able to see their destiny more clearly. Over the course of the last few years, the Earth and its inhabitants have been shrouded in a heavy mist of despair. Finally, we have a chance to move out of the darkness and toward the light. I believe the Jupiter–Neptune conjunction will be a blessing in disguise, whereby it will assist in healing the collective soul, especially in view of the recent Covid-19 crisis.

Editor’s Note: I received a review copy of Alan’s newest book, Discovering Faith in Neptune’s Ocean of Dreams, and felt he would be a compelling person to write on the Jupiter–Neptune conjunction for the blog. His book, with many horoscope examples, considers Neptune in mundane and event charts, in medical astrology, and in matters of faith. He has a subtle understanding of the planet and welcomes the reader into a sincere inquiry into Neptune’s myriad roles and possibilities.

Alan Richards-Wheatcroft’s long association with astrology began during his first Saturn return. He consults as a medical and evolutionary astrologer, and is also a psychotherapist and a spiritual healer. Alan’s articles have appeared in the ISAR International Astrologer, The Mountain Astrologer, The Astrological Association of Great Britain, Elfin, and Kindred Spirit. He is a regular contributor to Wanda Sellar’s Astrology and Medicine Newsletter, and also writes for the Federation of Australian Astrologers, and the New Zealand Journal of Astrology. Alan’s books, including the newly published Discovering Faith in Neptune’s Ocean of Dreams, can all be obtained through the American Federation of Astrologers, and on Amazon. Alan can be reached at alanrichards59@gmail.com>/a>.