The Supreme Court decision Roe v. Wade was announced on January 22, 1973. In the absence of an exact time, we will use 12:00 p.m., since this was clearly a zenith event that affected all of society, and of course, the reproductive rights of women and all those who can get pregnant. 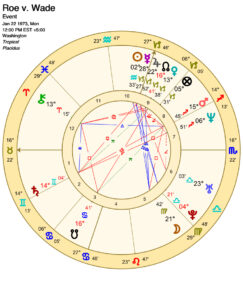 On May 3, 2022 a draft was leaked from the Supreme Court, written by Justice Samuel Alito, that shocked the nation. The draft indicated that the Supreme Court, with its five conservative judges, intended to overturn the landmark Roe v. Wade precedent of 49 years, which granted those capable of conception the right to choose whether to carry a pregnancy to term. 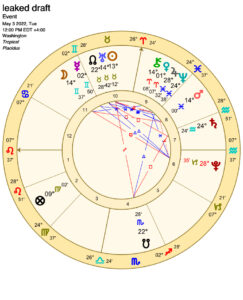 Comparing the 1973 chart of the Roe decision and the chart of the leaked draft, the most obvious condition representing the threat to overturn Roe v. Wade is the powerful transit of Pluto at 28º Capricorn exactly conjunct Mercury at 28º Capricorn in the Roe chart. Note that this position also conjuncts the US Pluto at 27º Capricorn, which is experiencing its first Pluto return — 248 years! This shows that the issue of reproductive rights is a deep taproot in the psyche of the country and generates intense passions.  Pluto is known for ending situations and/or transforming them. A Pluto transit typifies a direct challenge to what has been an existing reality. It demands that we recognize and use the resources at hand to deal with a crisis and muster our will and survival instinct. Pluto breaks down but always with the potential to reconfigure and reinvent. It requires that we master our empowerment, even in strongly adverse situations. 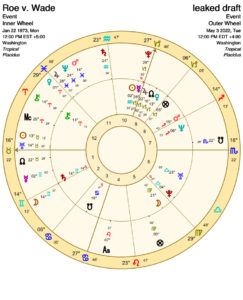 Mercury in the Roe v. Wade chart disposes Saturn retrograde in Gemini and Moon in Virgo. This planetary picture tells us that the conversation about reproductive rights will continue to be parsed. True to the nature of mutable signs, there is always more to add or delete based on new information and discussion of points.

Mercury at 28º Capricorn in the Roe chart is conjunct (out of sign) with its Sun at 2º Aquarius. In March 2023, Pluto will ingress into Aquarius for the first time in 248 years approaching the Roe Sun. However, it won’t be until April 2024 that Pluto reaches 2º Aquarius, making a retrograde station at that degree. From now through 2024 (including the next Presidential election), emotions will be intense on this issue. People will die if Roe is overturned, and if laws allowing for vigilante justice are enacted, we will be living in a very different America. It is obvious that poor women, already financially and emotionally overburdened, will suffer more than their wealthier counterparts. As we move to Pluto in Aquarius, the questions are: How do we define and protect social, emotional, physical and mental freedom? Who is free to do what, and how and why? Can we agree on the truth?

In addition, transiting Neptune in Pisces has been opposing the Roe Moon at 21º Virgo. Neptune has passed this degree, which shows that the signal for dismantling Roe v. Wade has been here for years; in the past few years that dedicated effort has gotten stronger. On June 28, Neptune will make a retrograde station at 25º Pisces and retreat to 22º Pisces, where it turns direct on December 3. This direct station is the closest, for the last time, to the 21º Virgo Moon. Confusion over the details continues and may be at its peak from the end of October 2022 to early January 2023.

Mars enters Aries from May 24 until July 5, 2022. Mars in Aries will the key Pluto in Capricorn conjunction to the Roe Mercury and the US Pluto. It reaches the triggering degree right before July 4, 2022. Although the majority of women want to preserve our right to choose our parental destiny, we face unprecedented challenges right now.

Dorothy Oja is a certified career astrologer (ISAR C.A.P.) whose studies span 40+ years. She services an international clientele, lectures, writes and teaches. Dorothy’s specialties are Elections for Surgery, Relationship Compatibility (Davison Chart), and Children’s Profiles. She serves on the faculty of the International Academy of Astrology and Kepler College. She founded The Relationship Club which hosts astrologers who lecture on various topics pertaining to relationship astrology.  Her first book is Planetary Resonance: Everything Leaves a Trace. She has authored two computer reports: Compatibility & Conflict for Romantic Relationships and Friendship and Business, (Cosmic Patterns Software). For 24 years Dorothy has written and published a monthly newsmagazine, PlanetWeather which includes social and cultural commentary. Her Facebook daily blog page is www.facebook.com/DorothyOjaAstrology.  She has served the astrological community as AFAN’s Chair of Legal Information and spent 16 years as ISAR Board member as Chair of Ethics and developing its Ethics Awareness Training program.  Dorothy is writing a book on the Davison Relationship Chart. DOja07@gmail.com Twitter: @ojadorothy