In the Western philosophical tradition there is a group of pre-Socratic philosophers who are collectively known as “monists” (from the Greek “monos” meaning “single” or “one”) because of their differing ideas regarding which one of the four elements was the primary source from whence all other things emanate or flow. In seeking to understand the “first cause” of the Universe, these philosophers were taking an important step in rational thought. Their explorations would influence later philosophers, such as Plato and Aristotle and help form the bedrock of Western Civilization.

Anaximenes uses the idea of density to explain differences in elemental substances in a way that makes common sense, and has also become fundamental to understanding the classical Hermetic Arts of Alchemy, Astrology and Magic. Even a child can see that Earth is more dense than Water, because when you throw a stone in a lake, it sinks. Likewise, everyone has witnessed the steam that rises into the Air once the Sun comes out and heats things up after a rain. Thus, the four elements can be arranged by their level of material density. This in turn forms a ladder by which things can move up (via rarefaction) or down (via condensation). This idea would go on to be central to the entire Ptolemaic Cosmos, which is arranged in a series of concentric spheres, with God at the most rarefied top; the stars and planets in a series of descending spheres leading down to the four elements, and finally to us. (2)

This basic and fundamental understanding of the elements, begun by Anaximenes, is extremely important to understanding classical Astrology as well as its sister arts, Alchemy and Magic. The idea that Air is simply Water which has become hotter and less dense, gives us important clues in how our Mercurial experiences of one year might differ from another. Because Mercury’s synodic (or solar cycle) is 116 days on average, this means there are three complete cycles during each calendar year. It also means that Mercury’s retrograde periods generally happen with an emphasis on one elemental triplicity, wherein Mercury spends an inordinate amount of time in the signs of one element, rather than the others.

Over the course of six or seven years, this elemental emphasis arising from Mercury’s retrogrades moves through the four elements in reverse zodiacal order, from the fire signs, to water signs, to air signs, to earth signs. I first became aware of this phenomenon through Erin Sullivan’s seminal work, Retrograde Planets. (3) I spent many years in intense study on this topic myself, resulting in my own tome: Hermetica Triptycha Volume One: The Mercury Elemental Year. (4) In Chapter Five of my book, I focus on the practical implications of understanding the way the four elements transform one into another via the classical four qualities: hot/cold and wet/dry.

The diagram above is known as the “square of opposites” and is used to demonstrate the basic interplay between elements. Once we understand that water is cold and wet, while air is hot and wet, then we can see the fundamental difference between air and water is that of density, energy and direction. This has enormous ramifications. For instance, with an understanding of the Mercury Elemental Year there were astrological reasons to have optimism that 2021 would be very different from 2020 — long before it was known whether effective vaccines for Covid could even be produced. 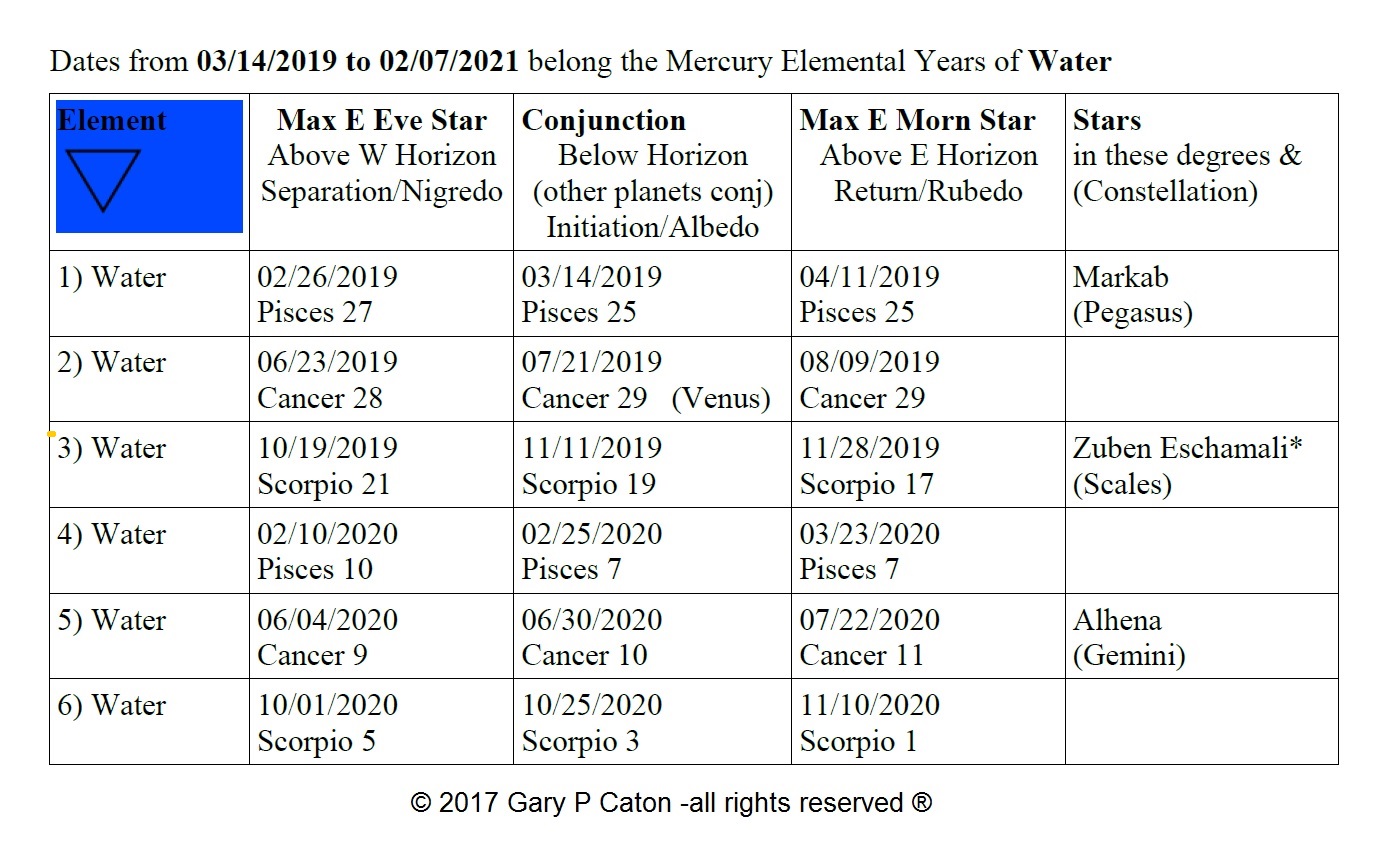 As we can see in the diagram above (from the ground-breaking ephemerides in my book), the nature of 2020 was defined by the Mercury Elemental Year of Water, which has the qualities of coldness, moistness and downward or inward movement. Just as the alchemical symbol for Water is a downward pointing triangle, we were forced to spend much of 2020 in isolation. However, 2021 is defined by the Mercury Elemental Year of Air, which has the quality of heat and moisture and is symbolized by an upward pointing triangle. Now that we know that effective vaccines for Covid are being produced, we have evidence to back up the astrological assumption that things should be very different in 2021. 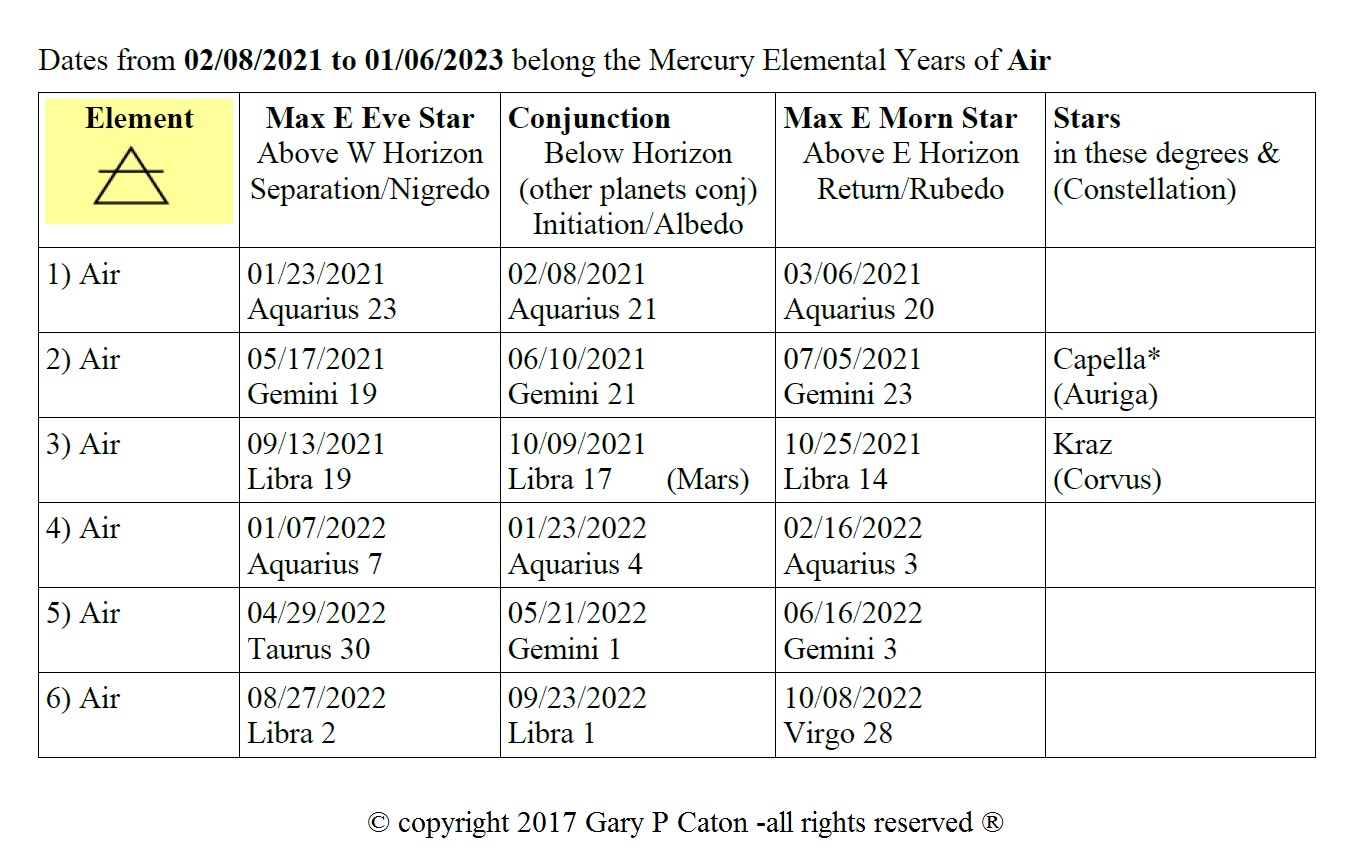 I have written at length for TMA about the many reasons why the shifts between elements for Mercury’s retrogrades continue to be an obvious source of socio-political change (5). Because they share a quality (moistness), the shift from water to air is not quite as dramatic as others, but there should still be a noticeable difference in public discourse. In Alchemy, Air operations involve separating or sifting of entangled or enmeshed materials or ideas. One of the main things we need to accomplish is some objectivity about what has happened to the World. In 2020 we saw a lot of emotional appeals (Water) based on ideas and evidence that not everyone yet agrees on. With Mercury spending more time in the Air signs, we should be able to get more objective information about what exactly happened, what was effective, and what was not. And this, in turn, should give us better ideas about where we are heading.

This is especially true because the element of Mercury’s retrograde is the same element into which the Great Conjunctions of Jupiter and Saturn are now shifting. Just as moisture converts to vapor and rises in the presence of heat, our emotional attachments to entrenched ways of life will now be challenged by the need to look at things from a higher perspective. Take for instance the change in direction around the concept known as “peak oil.” It was once thought that our demand for oil would keep growing and eventually a dwindling of supply would force us to change. But now, the pandemic has forced us to change and realize we can do things very differently. This in turn, has led some to see “peak oil” as a dwindling of demand as lifestyles begin to change post-pandemic. (6)

A long term investigation of the Jupiter-Saturn conjunction cycles, such as the one undertaken by my friend, Kelly Lee Phipps, clearly demonstrates that cultural diversity seems to be one of the socio-political features of Air cycles. (7) In particular, the cultural mixing that occurred in the post Alexandrian conquest era (Jupiter-Saturn conjunctions in Air signs from 344-245 BC), is seen to be crucial to the later formation of Western tropical astrology as we know it — with Egyptian, Mesopotamian, Hindu and European ideas all coming together in Alexandria. A later Air wave (Jupiter-Saturn conjunctions in Air signs from 1226-1286 CE), saw great cultural mixing via the silk roads of the Mongols, and the seeds of a later European Renaissance.

From this we can expect that one of the features of 2021-2022 will be new ideas that force us to re-consider long held assumptions about the world. Air is moist and cohesive like water, but unlike water, which tends to gather and remain in pools — air is hot and active which leads to more interchange and mixing between these pockets of relative similarity. This sounds like the perfect antidote to the increasing polarization we’ve seen recently in socio-politics. As we get back out into the world and begin mixing together again, I think it’s very possible we will find that we have much more to learn from those with different viewpoints than from those who already share our ideas. In fact, it is considered a basic tenet of Jungian psychology that — especially in the second half of life — we need to move away from our habitual patterns (i.e., dominant function) to explore and integrate the unknown parts of ourselves (i.e., inferior function) in order to become whole. This has certainly been true in my own astrology career. I began, as most did at the time, as a modern astrologer. But discovering, learning and integrating more traditional material has led to my greatest growth. With the Mercury Elemental Year of Air and Jupiter and Saturn in Aquarius, 2021 represents a great opportunity for us all to discover, learn and integrate new ideas, philosophies and social energy.

(1) For more on Anaximenes, see for instance The Ancient History Encyclopedia.

(5) I outlined the transition from Earth to Fire in 2017 for this TMA blog.

(6) See for instance a recent article in Bloomberg.

Bio: Gary P. Caton is a transdisciplinary astrologer who maintains an active sacred relationship with the living Sky as his temple. Initiated as an astrologer by a magnificent dream in 1993, Gary is the author of Hermetica Triptycha: The Mercury Elemental Year, and host of the popular Hermetic Astrology Podcast. Find out more at DreamAstrologer.