The Venus synodic cycle holds to a near-perfect eight-year pattern, drawing a symmetrical path that demarcates five zones on the ecliptic where it conjoins the Sun. However, the close interaction with Pluto and Mars during the course of this particular retrograde transit is a very rare occurrence, and indicates a time for buried matters to resurface, and political struggles between multiple interests.

I want to tell you all about that, and I will — in the next blog. However, in order to talk about the Venus retrograde transit, we require context and background. We are going to discuss the Venus synodic cycle, and more specifically, the section of the cycle where the current retrograde occurs.

In my previous entry, we imagined a circle that represents 2920 days — the total length of the Venus cycle — and then divided this circle into ten parts of alternating black and white sections. The boundaries of these ten sections represent each shift between rising and setting Venus phases during this 2920-day period: five rising phases (morning star, white) and five setting phases (evening star, black).

Because the Venus synodic cycle is two days shy of equaling eight full calendar years, every eight-year return occurs about 2-3 zodiacal degrees earlier than the previous one. As a result, the whole cycle shifts from one sign to the previous sign once every 120 years.

The rising phases are the morning star phases, preceding the Sun in zodiacal order and thereby rising before it on the eastern horizon. Rising phases gradually accelerate in speed, beginning with the interior / inferior retrograde solar conjunction and reach maximum speed as Venus makes with the exterior / superior direct solar conjunction.

The setting phases are the evening star phases, following the Sun in zodiacal order and therefore setting after it on the western horizon. Setting phases gradually decelerate in speed beginning with the exterior / superior direct solar conjunction, and keep slowing down until stopping for a retrograde station, changing direction back towards the Sun, and ending with the interior / inferior retrograde solar conjunction.

There is some existing astrological lore from older traditions that attempts to distinguish characteristics between the morning star and evening star phases of Venus. While I can’t say outright that I find morning star Venus to be more “martial” than evening star Venus, or vice versa, I am starting to detect themes contained in each. That is still a work in progress, though, so for the time being my informal observations will have to suffice. 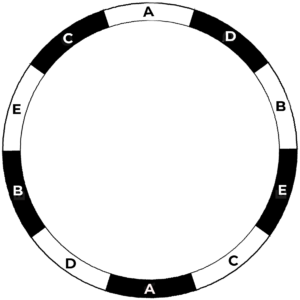 These five natural pairings are now identified according to groups labelled A-B-C-D-E. The ten phase groups have a duration range between 287-297 days, about a week shy of ten months. As the whole cycle shift backward in zodiacal order every 120 years, so do the phase pairs.

The A pair currently make their solar conjunctions in the early degrees of tropical Scorpio, although the next exterior / superior conjunction with the Sun (October 22, 2022) will be the first to occur in the last degree of Libra. However, the interior / inferior solar conjunctions remain in Scorpio for the time being, and won’t start occurring in Libra until October 21, 2034.

The B pair currently make their solar conjunctions about midway through tropical Gemini.  Venus last made an interior / inferior conjunction with the Sun on June 3, 2020.

The C pair currently make their solar conjunctions about midway through tropical Capricorn. The coming interior / inferior conjunction on January 9, 2022 will signal the beginning of a Rising C phase (see top row of diagram).

The D pair currently make their solar conjunctions between 19-20 degrees of tropical Leo. We most recently had an exterior / superior conjunct with the Sun on August 14, 2019 at 21°11′.

The E pair currently make their solar conjunctions in the early degrees of tropical Aries. These will eventually shift to tropical Pisces over the course of the 2040s. 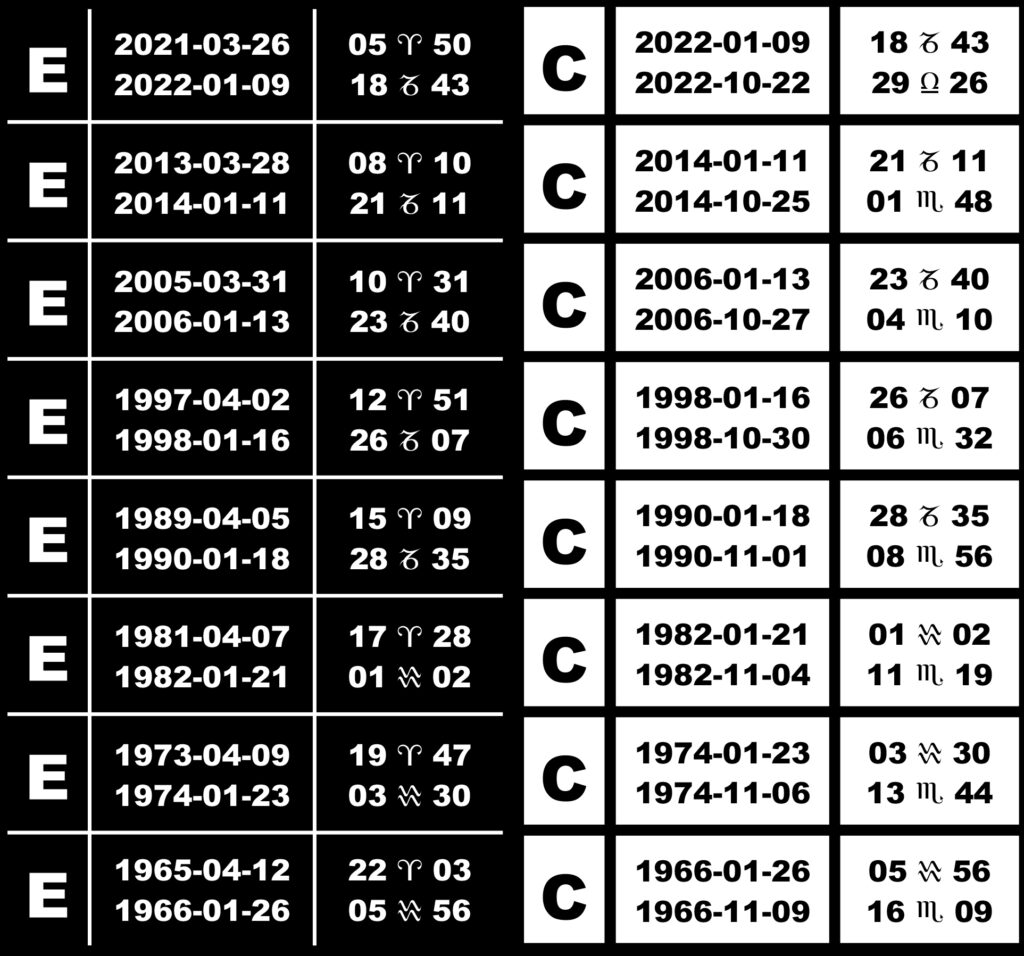 We began a Setting E phase on March 26, 2021 at 5°50′ Aries, which will end when Venus shifts to the Rising C phase with its interior / inferior conjunction on January 8-9, 2022 (see top row of diagram) at 18°43′ Capricorn, emerging into view as a morning star with its heliacal rising approximately ten days later.

So to recap, we have been in a Setting E phase for most of 2021, and will shift to a Rising C phase as of the interior / inferior conjunction in January 2022.

Aside from grouping phase pairs along the polar axis line of the cycle, Venus phases can also be paired with an adjacent phase, a combination that isolates and identifies a period of 19.5 months that occur once every eight years. Remember that the cycle, and therefore the phases in the cycle, gradually shift backward through the zodiac signs every 120 years. The Setting E to Rising C pair period has been making its interior / inferior conjunction switchover in tropical Capricorn since 1989. Prior to that, the conjunctions occurred in tropical Aquarius for most of the 20th century.

What follows are a few lists of events and notable births that occurred during these two phases. There is no need to cast timed horoscope charts for this exercise, so I’m just listing the relevant years in parenthesis for brevity’s sake. All related calendar dates cited can be easily verified online.

Many popular political uprisings have occurred during Setting E periods, including the Botton Tea Party (1773), Bastille Day (1789), the Bolshevik revolution (1917), the Rhodesian Unilateral Declaration of Independence (1965), the Tiananmen Square uprising (1989), and the fall of the Berlin Wall (1989).

Some deciding military engagements that led to the founding of new nation states have also occurred during Setting E phases, including the Battle of Yorktown for the U.S.A. (1781), the Battle of Carabobo for Venezuela (1821), the Battle of Riyadh (1902) for what would become Saudi Arabia, and the proclamation of the People’s Republic of China (1949) at the end of their civil war. Other famous military battles that occurred during the Setting E phase include Austerlitz (1805), Leipzig (1813), First Bull Run (1861), Pearl Harbor (1941), and the Yom Kippur War (1973).

The Rising C phase, which will begin with the Sun-Venus interior / inferior conjunction on January 8-9, 2022, also has an intense history with regard to popular political uprisings and strikes, including the Haymarket bomb riot (1886), the Pullman wage strike (1893), the Pennsylvania Anthracite coal miners strike (1902), the Welsh Tonypandy coal miner strike (1910), Suffragette Black Friday (1910), the Mexican Revolution (1910), the UK General Strike (1926), the Quit India resolution (1942), and the Puerto Rico Jayuya independence movement (1950).

Although the Black Lives Matter movement was founded in 2013, it really gained its notoriety during the Rising C phase summer of 2014, following the police killings of Eric Garner in New York and Michael Brown in Ferguson, Missouri.

Portugal has a triple-header in this regard, having founded their Republic (1910), succumbed to a military coup that would dominate the next 48 years (1926), and then put dictatorship behind them with the more gentle Carnation Revolution that ended that military rule (1974) all during a Rising C phase.

There are a number of other coups and political assassinations that occurred during the Rising C phase, including the murders of Sadi Carnot (1894) and Yugoslavia’s King Alexander (1934) in France, the murder of Russia’s royal Romanov family (1918), Hitler’s bloody Night of the Long Knives (1934), the killing of Iraq’s King Faisal during a coup (1958), and the relatively less violent coups of Syria and Ghana (1966). On the other end there was the very gruesome Liberian coup of 1990. Heck, Watergate wasn’t exactly a coup, but President Richard Nixon resigned during a Rising C phase, so let’s tuck it in here on the list anyway. .

People born during the Rising C are not the same breed of tough political minds we found with the Setting Es. Rising C births have given us some of our greatest creative talents, especially music.

So what about the retrograde? What about the fact that Venus will make its retrograde station conjunction Pluto? What about the triple conjunction of Venus, Pluto, and Mars that happens in early March after Venus has stationed direct? These are obviously important questions, and they will be discussed in the next blog entry. With this brief introduction to the Venus synodic cycle out of the way, we can now move forward to look at what happens when Venus moves backward.

(1) Some of those countries have had further coups going forward, but those listed here are all first timers.
(2) Foreshadowing: The next blog will cover this in more detail.

Bio: Nick Dagan Best was converted to astrology while on the road to Damascus on January 17, 1995. He trained with a variety of astrology teachers in the NYC NCGR program between 1997-2000. In the summer of 1999, he was introduced to Hellenistic astrology at a series of Project Hindsight conclaves. Inspired, he soon began focusing his studies on planetary synodic cycles. An avid researcher, Nick has amassed a Solar Fire database of event and natal charts totalling over 40,000 entries. He is available for consultations at nickdaganbestastrologer.com