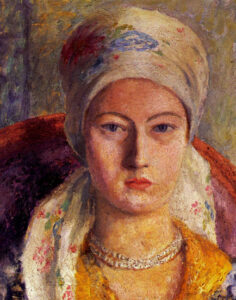 In this article, I will reflect on the recent Taurus–Scorpio nodal shift, together with some of its implications on a personal and the collective level. I will also consider the Moon’s 18.6 year nodal return cycle — as well as set a broader context from some conclusions of my research study, “The Moon’s Nodes in Action.”

In late January 2022, the Moon’s North Node moved into 29° Taurus and the South Node into 29° Scorpio. They will continue to occupy this pair of signs, travelling backwards, alternating between forward and direct motion, until the shift into the signs of Aries and Libra in mid-July 2023, a period of around 18 months.

A personal story offers a vivid introduction to the core meaning of the nodal axis presence in Taurus–Scorpio, along with the attendant solar and lunar eclipses.

My natal North Node is in the 9th house at 28° Taurus, conjunct the 28°05’ Taurus MC. Hardly surprising, then, that this symbolism describes my career path and life direction which have always centred around enlarging people’s perspectives to live their lives more fully — via teaching, counselling, writing, and the practice of astrology. On November 19, 2021, the lunar eclipse was in my 9th house at 27°14‘ Taurus, closely conjunct the MC. I was at an investment company’s office and told that the agonizingly slow process of settling my late husband’s estate (he died on January 13, 2020) had at last produced the transfer of all financial assets to my name. What a graphic illustration of the Taurus–Scorpio polarity operating in real life: transfer of resources (Taurus) following a death (Scorpio). Also, the deep grief that goes with benefitting materially from the death of a much-loved and cherished life partner.

With the North Node as a symbolic North Star pointing towards the path of fulfilment of one’s life purpose — I now have some extra material resources and can contribute funds to local land acquisition and development projects to promote outdoor learning and related activities to help young people in crisis (Scorpio) ground themselves in earning money (Taurus) by doing something practical and worthwhile with their lives.

I can also continue to fund the publication of my own books (via Writing from the Twelfth House Publications) which, in recent years, have been in electronic form only; the next one on the list will be a print version of my research study “The Moon’s Nodes in Action.” (3) As the nodal axis and eclipses travel backwards through the Taurus–Scorpio polarity in my 9th and 3rd houses, one can see (via the house positions and the the pair of signs) the “rocket-fuelled” impact of the first eclipse in this Taurus–Scorpio season, which launched new ventures, but with related themes.

It would be interesting to hear from you folks out there who have strong links with the Taurus–Scorpio polarity — through planets, major asteroids, angles, nodes, etc. — to see how this Taurus–Scorpio axis and eclipse period is affecting you. It might also be enlightening for you to go back to previous times during this nodal period, i.e., 2003–4; 1984–85; 1966–67 (if you were around then and can remember the ’60s, that is!!) to see how the 18–19 year cycles impacted your life direction. Every single one of these returns to my natal MC–North Node, IC–South Node has been life-changing.

Recent events reveal how the node and eclipse transits through the signs of Taurus (Mother Earth, land, and land grabs) and Scorpio (life and death crises, serious emergencies, and collective deaths) reflect the collective disruptions that are clearly illustrative of the energies of these signs, such as:

The astrology of this event (February 24, 2022, at 5 a.m., Ukraine time) has the Scorpio South Node in the 10th house conjunct the MC, with the Taurus North Node in the 4th house conjunct the IC, very closely trine to Pluto in the 1st house. Venus, Mars, and Vesta, significator of home and hearth, are all applying to the nodes–MC–IC pattern. (5) (Please see the link in the footnote to my colleague Christina Rodenbeck’s fine article on Russia’s attack on Ukraine.)

In all three collective examples, the underlying pattern of the Taurus–Scorpio nodes and its attendant symbolism can be seen.

Research Findings: A Bigger Picture to the Taurus–Scorpio Shift

The research I did for “The Moon’s Nodes in Action” was directed to a core question: How significant is the nodal axis in the interpretation of horoscopes?

I focus in detail on the lives of six people: three men and three women, three famous, and three selected from my client files (anonymously and with their permission). I consider personal horoscopes as well as event horoscopes when relevant, thus balancing personal and collective lives in the research process.

There are two lengthy case studies, one is a whole life scan of a male client. The other is Mary Shelley, author of Frankenstein. This subject was inspired after I realised that she had conceived the plot of the world-famous novel just before her 19th birthday. She completed the book before she was 20, as the North Node returned to her natal North Node in Gemini, in the mystical, prescient 12th house.

The other four studies, what I call “Nodal Moments,” examine specific points in four people’s lives which were clearly life-changing. The two famous examples are Princess Diana’s death in a car crash on August 31, 1997, and US astronaut John Glenn’s return to space for the final time on January 15, 1998.

What Are My Conclusions?

Here I quote from the book:

“…I did not expect my research into “The Moon’s Nodes in Action“ to present me with such a strong suggestion that we all have our destiny, and that at certain potent times in life there are events and turning points which are initiations into the furtherance of that destiny — and that throughout our lives there may be some intelligent ‘Other’ observing and/or guiding that movement. But that is the feeling which persists in me as a result of my work… As the Indian astrologers have been telling us for many centuries, the Moon’s Nodes really do seem to be connected to the workings of Fate in the shaping of personal destiny…” (6)

The research bore out what I had concluded from observation over many years of both practising and teaching astrology, as well as from observing the shifting energy patterns of my own life. In contemplating the unfolding picture of a particular time period, the combination of nodal activity with the foreground presence of outer planets, especially Pluto, points out that something powerfully transformative is going on and should be carefully noted.

It becomes important, then, to pay particular attention at those times to natal nodal patterns, along with the transiting nodal–eclipse picture through the backdrop of the houses and angles thus highlighted. My research findings continue to be highly relevant both in collective and personal lives until mid-July 2023 as the nodal axis continues its journey through Taurus–Scorpio. The examples quoted in this essay from the outset of the Taurus–Scorpio eclipse shift at the end of 2021 have already demonstrated this to be the case. It will, indeed, be especially interesting to observe what happens when the North Node is exactly conjunct Uranus at 18° Taurus at the end of July–early August 2022.

1) For more detail on the nodes and their accompanying eclipses, as well as some useful tables, check out this article at Cafe Astrology.

2) However, you never know, we astrologers are a persistent, hardy — and very curious — bunch of people! My curiosity regarding how the changes turn out during this era of chaos and turbulence might be enough to keep me here.

3) My first print book, an original research study, Jupiter Meets Uranus, was published by the American Federation of Astrologers (2009).

4) Ukraine has a very long history of being subjugated by outside powers and has a very short history of national independence, which was declared by the country in 1991.

5) For the horoscope for the start of Russia’s attack on Ukraine on February 24, 2022 and its striking links with the horoscope of the start of the Second World War on September 1, 1939, see The Invasion of Ukraine by Christina Rodenbeck, the Oxford Astrologer.

6) Quote from The Moon’s Nodes in Action, p. 154, e-published in Scotland, UK, by Writing from the Twelfth House (2015), currently available as an e-book from www.anne-whitaker.com. (Print publication is pending.)

Anne Whitaker has been an astrologer since the 1983 Jupiter-Uranus conjunction in Sagittarius and holds a diploma from the Centre for Psychological Astrology in London (1998) as well as several academic qualifications. She no longer does astrology readings, but mentors international students studying with reputable courses, most notably MISPA — the Mercury Internet School of Psychological Astrology. Her latest book is Postcards to the Future: Mercurial Musings 1995–2021 — an acclaimed collection of 60 essays, articles, and columns from the many publications to which Anne has contributed over the years, including the UK’s Astrological Journal, The Mountain Astrologer, Dell Horoscope and astro.com. “Postcards…” is available on Amazon, in London at The Astrology Shop and Watkins Books, and at wessexastrologer. Anne can be contacted at info@anne-whitaker.com.