News media are widely reporting that an extraordinary number of lawsuits have already been filed to challenge the voting process. Largely filed by Republicans, the lawsuits are targeting mail-in voting, early voting, voter access, voting machines, voting registration, and the counting of mismarked absentee ballots. Inevitably, close results where Democrats have won will likely lead to more lawsuits and declarations of fraud, as exemplified by Trump’s precedent.

Astrologically, a rare number of major events are in play during this election season. Here are the top five: 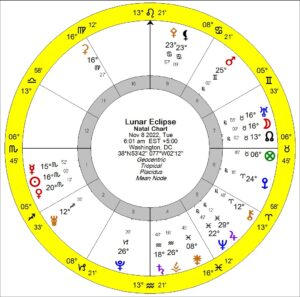 1. The lunar eclipse on Election Day is the most obvious, as disturbing developments are predictable due to the Moon’s exact conjunction with Uranus. When comparing this eclipse chart to the US Scorpio rising horoscope, the forecast becomes even more stunning since the eclipse’s Sun–Mercury–Moon–Uranus polarity at 16° Scorpio–Taurus is precisely square the US Midheaven at 16° Leo. The conditions around the Midheaven shape the outcome, making this eclipse unusually unsettling. (1) 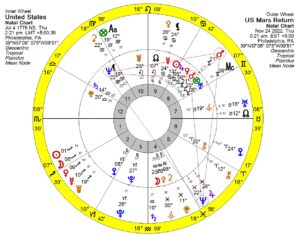 2. The ongoing Mars–Neptune square (exact on October 12 and November 19 this year, and March 14, 2023) hits the US Mars–Neptune square, further clouding the outcomes. Mars just turned retrograde in Gemini, making widespread claims of fraud ever more likely. The Republican National Committee is already preparing to contest the voting process in key states. It has a well-funded plan to undermine any lost election. Transiting Mars, the action planet, will be retrograding while squaring transiting Neptune, squaring the US Neptune, and conjoining the US Mars — all in mid-to-late November when lawsuits and demands for recounts will likely surge.

3. The last of three US Pluto Returns takes place on December 28. Pluto is the co-ruler of the US Scorpio rising horoscope, so when this chart is used, the Pluto Return takes on extra importance. In Capricorn, Pluto represents the power of America’s institutional structures. The Pluto Return challenges those structures, and this election is a clear example of one of the nation’s most prized traditions — the free and fair election process. This is up for debate this post-election phase, and it will continue through the end of the year.

4. Mercury turns retrograde on December 28 — the same day as the US Pluto Return. Mercury’s station takes place at 24° Capricorn, which is exactly opposite the US Mercury at 24° Cancer. Mercury’s association with tracking and documenting outcomes goes under review over the following three weeks. Watch around this date for historic judicial rulings since the US Mercury resides in the 9th house of legal affairs.

5. Mars turns direct on January 10, 2023, at 8° Gemini, which is relevant for two reasons. Primarily, it suggests that information becomes clearer and more forthcoming after this date. And Mars here indicates a definitive developmental phase in reviewing the election results, since it’s closely conjunct the US Uranus. With Mars slowing down as it stations, it remains within one degree of conjoining the US Uranus all month. That creates plenty of excitement, shocking and surprising events and, for many, unsettling conclusions.

In summary, what’s at stake over the next few months is public faith in the election process.

(1) Editor’s note: Michael O’Reilly is using the Scorpio rising horoscope of the US.
Astrodatabank: USA no.11

“With Scorpio Rising, the emphasis in the United States is on the accumulation of power itself, whether its financial, military, or ideological power. America’s never-ending quest to be the world’s richest, strongest, most righteous nation is its globally recognized signature. Scorpio, linked to the eighth house, is naturally associated with capitalism. When Scorpio was rising on July 4, 1776, there were four planets in the eighth house of capitalism, and of course Scorpio itself is intensely aware of where the finances are accumulating, and the natural power that these resources bring.”

Author’s note: Extensive discussion starts here for those who would like to know more about the US Scorpio rising chart.