On February 20, 2022, the US will experience its first Pluto Return; a period of reset for the nation’s power base, unleashing forces of transformation, decay, death, rebirth, and renewal. It’s a cosmic, karmic turning point; a watershed event with far-reaching ramifications for the country, its people, their leadership, and the very form of its government.

There is much to be said from a planetary perspective about the Pluto Return, but if we give another twist to the celestial kaleidoscope and inspect the event from an asteroid level of interpretation, there’s even more. In this post I want to focus on two patterns in particular: a solar grand trine and a yod incorporating Pluto itself. 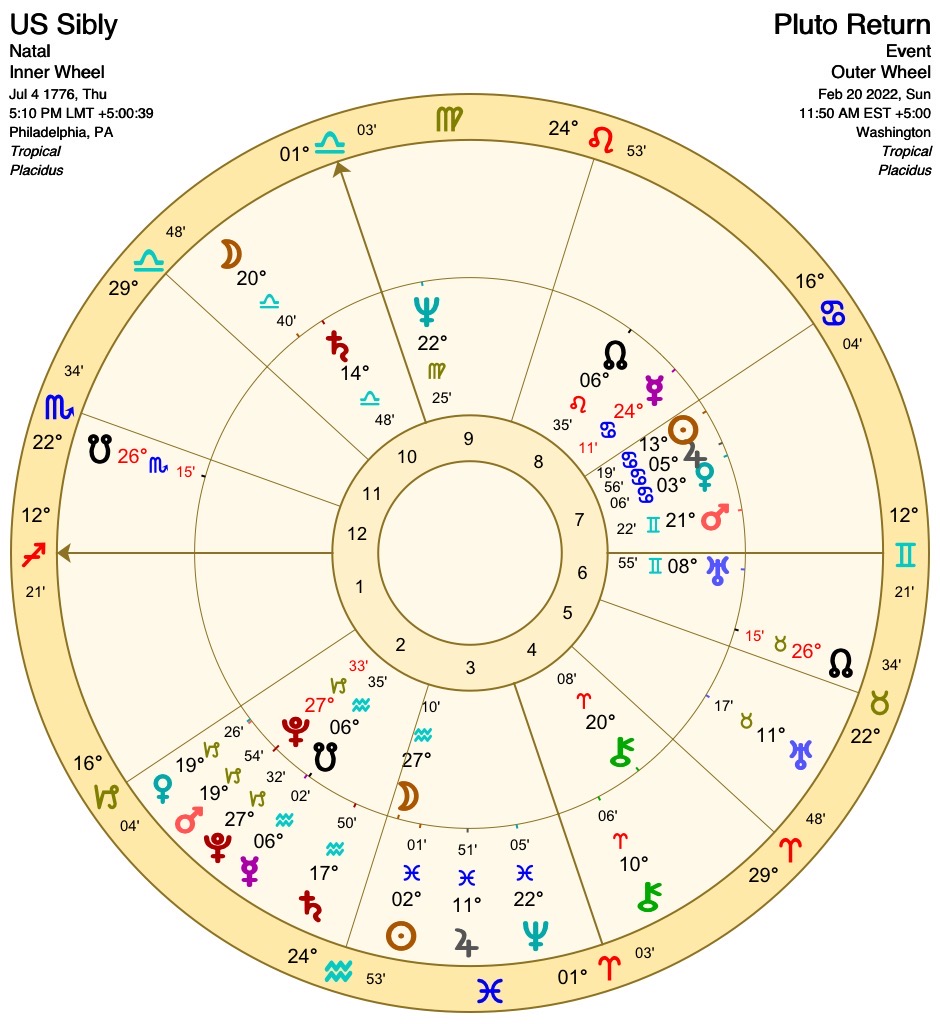 The grand trine speaks to the issues in focus at the time of the exact return, relating specifically to the political health of the nation. It is composed of the Sun at 2° Pisces, traveling with asteroid Demokritos at 1° Pisces and Damocles at 28° Aquarius, trine asteroid America at 5° Cancer, and asteroid Washingtonia at 4° Scorpio. Both of these have stationed in the prior week (America turning direct on February 14, and Washingtonia turning retrograde on February 18) and remain at their station degrees for the return.

Stationary bodies form embeds in consciousness, points which become loci of energy and exert an outsized importance on character or events. They are the still points upon which the chart revolves. In this instance, it’s quite remarkable to see celestial markers for the US itself (America) and its federal government (Washingtonia), at a time when the nation comes under review for its handling and distribution of power (the Pluto Return). The solar stellium depicts the crisis at hand, with its focus (Sun) on the looming threat (Damocles) to democracy itself (Demokritos). These, then, are the stakes: as Pluto prepares to remake the country from the ground up, will we decay into autocracy, plutocracy, and kleptocracy, or will we be reborn into a yet more perfect Union?

Sparking movement in the grand trine is what I describe as “ein aus sich rollendes Rad” (from the German, in Nietzsche’s Thus Spoke Zarathustra: “a wheel rolling out of itself”), with each point of the trine also subject to a square, providing energy and forward momentum, like the spokes of a wheel. The squared bodies give additional information to the character of the grand trine as a whole.

In this case, we have Sun–Demokritos–Damocles squaring asteroid Karma at 0° Sagittarius. Karma is cause and effect; the results of our actions, the price we pay for the decisions we have previously made. The struggle in which we find ourselves embroiled today stems from misguided and shortsighted past attempts to harness and amplify popular discontent for partisan political gain. The energies unleashed in this process have become unmanageable, with a life of their own.

Next, America is square to asteroid Truth at 4° Libra; the country is at odds with itself over basic facts, what is truth, and what is falsehood. Data is disputed, science is denied, whether regarding climate change, pandemic precautions, or any number of “inconvenient truths,” and replaced with almost involuntary, kneejerk, tribal-based political rhetoric and reactions.

Finally, Washingtonia is square to Mercury (6°02’ Aquarius) with asteroid Nemesis there as well (9° Aquarius); the federal government is bogged down in incendiary, divisive rhetoric, an inability to promulgate plans, make decisions, and implement them. Essentially, words (Mercury) promote our ruin or destruction (Nemesis). A conjunction of Jupiter (11°51’ Pisces) with asteroid Fanatica at 16° Pisces further describes this impasse: our politics are enmeshed in, and eroded by, extremist ideologies with fanatical adherents in positions of power.

The second pattern, a yod, a.k.a. “Finger of Destiny,” is even more remarkable for the perfection of its celestial timing. With elements having orbital periods varying from 3.8 years to more than a thousand, somehow the cosmos managed to bring all four bodies in this fated pattern to the same degree of their respective signs, just in time to send us a Pluto Return message. (1)

A yod is comprised of two or more points in sextile aspect to each other, with each point or cluster inconjunct to a third. The base markers form the ground of the circumstance being described, pointing to a resolution, or outcome, at the apex. For this pattern, we see Pluto at 27° Capricorn sextile a union of TransNeptunian object (TNO) Ceto with asteroid Atropos at 27° Scorpio on the base, both inconjunct TNO Chaos at 27° Gemini on its apex.

We’re all familiar with Pluto, the key element of this chart, with its focus on raw power and transformation, and its bailiwick extending to such things as decay, death, and rebirth; coercion, manipulation, and control; criminality; sexuality, scandal, and taboo; and trauma and abuse. But some of the other players might require an introduction.

Atropos is named for the mythic Greek Fate who severs the thread of life at death, and as such, she appears prominently in charts of demise and passing. But in a more general sense, Atropos represents endings, completion, and conditions encountered at the finish (in this case, at the “end” of Pluto’s first cycle with itself in the US chart). Ceto is named for another Greek mythic figure, a primordial goddess of the ocean depths, a sea monster who became mother to a host of monstrosities. Metaphorically, as a denizen of the sea, Ceto represents the subconscious, and specifically those “monstrous” elements of ourselves and the collective which are denied and hidden away, until they erupt with terrible force in ways which shock and horrify us. Chaos is just what it sounds like — disorder, confusion, bedlam, pandemonium, a state of ceaseless change and turmoil where no structure can be found. But significantly, the primordial Chaos was also envisioned by the Greeks as the creative void, a formless place from which all else proceeded.

I should also mention that, although it’s a degree off exactitudes for the yod, Pluto is also accompanied by asteroid Lie at 28° Capricorn (I mean, the cosmic clock can’t be perfect all the time, right?). That lends a real-time nuance to the political implications of this pattern, with the “Big Lie” that Donald Trump won the 2020 election, only to have it stolen from him, as the backdrop for the current crisis of democracy facing the nation.

But in general, this yod speaks to an eruption from the collective subconscious of previously denied monstrous traits (Ceto, typified by the white supremacist, racist, homophobic, and misogynist elements on the rise in the country), which, once unleashed, threaten to destroy or transform (Pluto) a democratic system in its death throes (Atropos), resulting in a total breakdown of order (Chaos), from which, perhaps in time, there may come a creation (Chaos) or regeneration (Pluto) of the nation, a phoenix rising from the ashes (with the phoenix being another symbol of Pluto).

The Pluto Return argues that the time is ripe for a restructuring of the power base of the country. Just how protracted and painful that process will be, and what form eventually emerges, remains to be seen.

Bio: Alex Miller is a professional writer and astrologer, specializing in deep space points and minor bodies of the solar system. A past president of Philadelphia Astrological Society and former member of the board for the Philadelphia chapter of NCGR, Alex is the author of The Black Hole Book, detailing the use of black holes in astrological interpretation, and Cat o’ Nine Tales, a memoir of his cat rescue work. He has been chronicling the effects of asteroids and other minor bodies since 2005, much of which can be found at his website: alexasteroidastrology. Alex can be reached at glaktix@verizon.net