1. Mercury turns direct on the 3rd in the “business first” sign of Capricorn. If you’ve been feeling down or frustrated by delays and obstacles, this Mercury station is the time to get real and make constructive choices. Plans change on the 3rd and 4th (when the Sun conjoins Saturn). Over the following week, many will find themselves highly focused on some important task, work-related project, or highly detailed paperwork, such as taxes. Mercury is heading for a conjunction with Pluto on the 11th, which is favorable for any research, analytical work, and persuading others to your point of view. Avoid obsessive behavior in yourself and watch out for that in others.

2. Mars conjoins Venus on the 16th. Normally, we say the faster planet first, but since Venus just turned direct, Mars is faster at this time. In Capricorn, these two love planets provide plenty of sexual chemistry in and around the office or other business-related interactions. Since Venus–Mars is aspecting Ceres in Gemini (by trioctile), the romances that may last are those where honest communication of feelings is shared. Sexual attraction is provided by Venus and Mars, but actually caring for the other is what Ceres brings. Venus speeds up and then will conjoin the slower Mars on March 6, so the two love planets are within one degree from February 11 to March 12, making an unusually lengthy mating season.

3. Jupiter sextiles Uranus on the 17th and presents a window of exciting opportunities from the 13th through the 21st for those with natal placements activated by this combination. Look for planets or major asteroids in 10°–12° of any sign, but especially in Pisces or Taurus, the signs Jupiter and Uranus are transiting. This combination is especially favorable for taking short-term financial risks, or finding areas where you can prosper. During this interval, pay attention to your intuition, synchronicities, and any flash of insight regarding areas where you can advance with confidence and enthusiasm. This very favorable combination renews optimism, provides meaning to life, and awakens your inner Free Spirit. 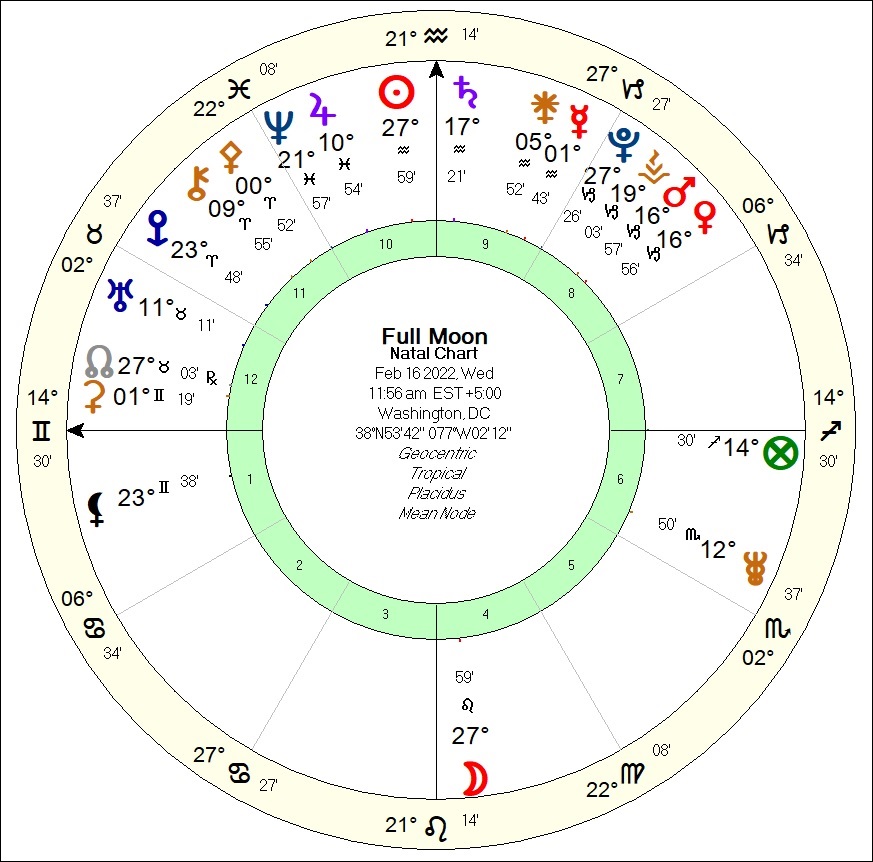 4. The Full Moon in Leo becomes exact on the 16th (11:56 a.m. EST). This lunation is rare and substantial since it squares the lunar node axis (in Taurus/Scorpio) and is in the same degree as transiting Pluto — within days of the first US Pluto Return in Capricorn. Any placement you have at 27° (plus or minus one degree) is under the influence of this unusual astro event. For most people, this Full Moon highlights how well you fit in with your tribe, your family, and your network of friends and associates. Those who shine too brightly may arouse resentment or jealousy, or alternatively, become a beacon of inspiration to others. For some, this Full Moon may bring a pivotal event, a kind of emotional peak related to your work with the US government or a major corporation. 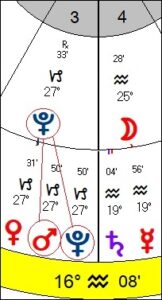 5. The US Pluto Return takes place on the 20th, the first of three exact hits in this historic phase. The next two are on July 11 and December 28 of this year, but ideally, the Pluto Return is best considered as a protracted phase, bringing a complex, difficult set of circumstances that may threaten the very foundation of the nation. Pluto brings us to the core issues, and its association with dictators (or autocrats, authoritarians) readily manifests as personalities who may undermine the democratic principles enshrined in the US Constitution. Covid-related issues have polarized the nation, the US has become more of a corporatocracy than a democracy, and global warming threatens us all. Mars conjoins Pluto this time, suggesting that potential military conflict may intensify in February.

Bio: Michael O’Reilly is a professional astrologer and counselor specializing in the use of political and evolutionary astrology. His recently published book, The Ultimate Book of Astrology Books, is a collection of book reviews he wrote for Dell Horoscope magazine between 1993 and 2020. Visit his website at www.neptunecafe.com or email him at wolfstar3@aol.com.