1. Mercury turns retrograde in Aquarius on the 14th while squaring Uranus. Challenging Mercury–Uranus aspects can bring plenty of anxiety, nervousness, and uncertainty due to developments happening beyond one’s control. That makes the three days around this Mercury station a good time to be extra cautious in your dealing with others, on the road, and wherever slip-ups could happen. Stay focused on what you’re doing to avoid accidents. For some, this station may involve the need for immediate attention to finances, like paying essential bills, or scaling back extravagant expenditures. For many, Mercury’s station will likely bring an unexpected change of plans. 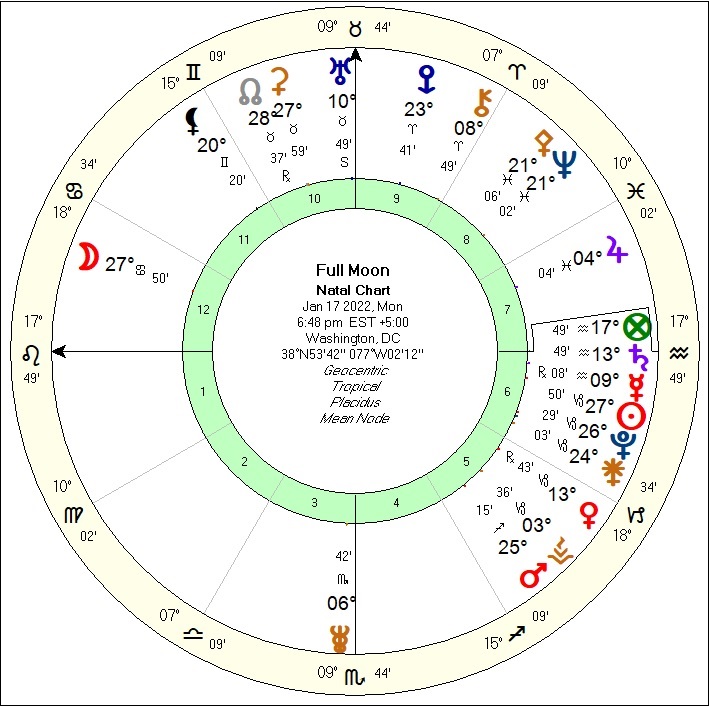 2. The Full Moon in Cancer takes place on the 17th (6:48 pm EST). This lunation promises to be a powerful, disruptive phase since the Sun in Capricorn conjoins Pluto as Mercury turns retrograde. Expect business alliances, market forecasts, and legal arrangements to shift, even dramatically reverse course. Financial plans within marriages or other committed relationships may need re-working. This Full Moon also aligns with the US Pluto: look for the political scene in Washington to bring extra intense discussions, breakthroughs, and breakdowns, likely concerning a scaled-down version of Biden’s social spending and climate package. Those with planets at 26º–27º of the cardinal signs will likely be going through life-changing developments.

3. Ceres conjoins the North Node in Taurus on the 24th and is an important influence for the entire month. Since the perpetually retrograde motion of the North Node recently led to its exit from Gemini, this conjunction with Ceres anchors the North Node’s passage in Taurus for the next 18 months, creating a new interest in long-term stability. Ceres here fosters traditional family values, financial security, and whatever needs to be done for one generation to take care of its older or younger generation. In its more universal caretaking function, Ceres in Taurus awakens renewed interest in dealing with global warming. Expect some extreme weather events this month to spark concerns.

4. Neptune squares Black Moon Lilith on the 25th, but this mystical combination is in effect from the 14th into the first week of February. Both these archetypes are more concerned about what lies in the invisible realms than our material universe, so their blending creates a synergistic, almost tangible feeling about what’s happening behind the scenes. On the negative side, Lilith square Neptune can foment deception, conspiracy theories, mental illness, and endless fear of the unknown. On the positive side, these two enhance empathy, artistic creativity, and a questing drive for spiritual understanding. Listen to your dreams, explore the deeper dimensions of astrology.

5. Venus turns direct on the 29th while trine Uranus, an unusually pleasant and practical turning point that can bring some light into your world. After 40 days of retrograding through Capricorn, Venus has likely pushed you to question your personal relationships in some fundamental way. At the very least, you may have withdrawn to turn inward. Now, as Venus turns direct, is a good time to make decisions and begin moving forward with your new attitude of acceptance and common goals. The last three days of January are exceptionally favorable for creating practical business plans and financial arrangements. You may have to make some adjustments since Mercury is still retrograde.

Bio: Michael O’Reilly is a professional astrologer and counselor specializing in the use of political and evolutionary astrology. His recently published book, The Ultimate Book of Astrology Books, is a collection of book reviews he wrote for Dell Horoscope magazine between 1993 and 2020. Visit his website at www.neptunecafe.com or email him at wolfstar3@aol.com.