1. Mars enters Taurus on the 5th, marking a noticeable shift in energy levels. Mars is exiting the impulsive, spontaneous, irrepressible sign of Aries and taking on the more steadfast, reliable, and deliberate style of Taurus. After the 5th, financial incentives bring quicker results than appeals to being the best or first. The outer planets Chiron and Jupiter are still in Aries, but Chiron turns retrograde on the 19th followed by Jupiter’s retrograde on the 28th. Altogether, these celestial shifts remind us to look before we leap, to be more circumspect, and to be cautious in any new endeavor. Mars here is exceptionally favorable for building, gardening, cooking, and other sensual pleasures.

2. The US Pluto Return on the 10th is the second of three exact hits, but as is usual for Pluto transits, the overall significance unfolds over years. Still, major historic events tend to play out near the exact hit, which is in effect all month. The transformative developments that are manifesting now include the intensification of political partisanship, the consolidation of wealth in the hands of a few, and major corporate mergers, buyouts, and collapses. The economic system itself may come under increased pressure as inflation, high food costs, rent, and mortgages take their toll on ordinary citizens. The most important issue of our time — global warming — takes a back seat to the daily social, economic, and political intrigues.

3. The Full Moon in Capricorn arrives on the 13th (11:38 a.m., PDT; 2:38 p.m., EDT) and is only 6° from Pluto in Capricorn. Expect significant changes and developments in domestic, family, and security needs, as well as a change of status in work-related, professional, or business conditions. Find ways to balance internal concerns with social and work expectations. Eris, the planet of chaos and discord, squares the Cancer–Capricorn placements, adding the potential for major disruptions of plans. The Full Moon chart set in Washington, DC, features Mars right on the Descendant where it opposes the asteroid Hygeia on the Scorpio Ascendant. This dynamic suggests that the nation’s health is becoming seriously undermined by gun violence, which is becoming a widely recognized problem area. 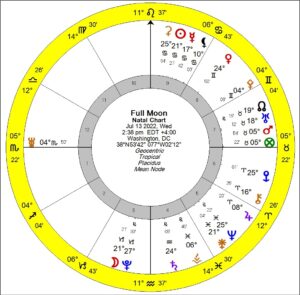 4. Jupiter in Aries is octile (45°) Saturn on the 21st, but since Jupiter turns retrograde on the 26th this aspect lasts longer than usual, from the 11th through the first week of August. How well do you fit in with your community? Do the the social pressures or expectations within your circle (Saturn in Aquarius) restrict your ability or need to express yourself freely (Jupiter in Aries)? Those with planets in 23° – 25° fixed signs and/or 8° – 9° cardinal signs may need to make some adjustments in who you call “friend.” A simple time-out may work, or find new acquaintances or a new circle. Those who feel isolated are encouraged to find a social network in order to engage in mutually enjoyable activities.

5. Uranus in Taurus conjoins the Moon’s North Node on the 26th and they are within orb from July 14th – August 9th. If you have planets at 18° of any sign (especially Taurus or Scorpio) you will feel the need to make urgent or immediate changes in your finances, domestic conditions, or material possessions. Act constructively: look through your stuff and throw out what you don’t need; replace the old with the new; find innovative technologies to advance your personal goals. The lunar nodes’ involvement indicates that the changes you make now are karmic and likely to involve your closest or most important relationships.

A sixth astro-event for July could easily replace one of the top five: Ceres opposes Pluto on the 17th. The Great Mother asteroid gives definition to the US Pluto Return phase, especially since it completes this opposition three weeks after the Supreme Court officially overturned Roe v. Wade. Ceres was at 17° Cancer when the stunning decision was announced on June 24th. As Ceres closes the 10° gap to its opposition to Pluto, it will be joined by the transiting Sun and Mercury. So the Sun, Mercury, and Ceres all oppose Pluto within two brief days.