1. Mercury turns direct on the 3rd at 26° Taurus, generally a welcome celestial shift for star watchers. However, this time Mercury conjoins the “evil star” Algol and is within one degree of squaring Saturn. Of course, those with natal planets at this point are not inherently evil, but the potential for unsettling events may certainly arise around this time. As an example, the 18-year-old Uvalde shooter was born with his Sun at 26° Taurus, exactly conjunct Algol. As Mercury stations, we collectively feel sorrow, grief, and frustration over the absurd amount of guns in the US. The positive expression for this station is to bring about constructive changes using the rage, passion, and intensity associated with Algol.

2. Saturn turns retrograde on the 4th in the networking sign of Aquarius. Those with natal planets at 24°–26° of the fixed signs are most influenced by this station and may need to make adjustments in their professional or business roles. Health and relationship issues may also be areas of concern. Saturn (25° Aquarius) is picking up Neptune’s nebulous vibrations (25° Pisces) which may lead us to avoid making necessary changes. Those on the right path will find it easier to go with the flow. During the first week of June, discover the difference between true and fair-weather friends. The simultaneous stations of Mercury and Saturn may indicate that a younger individual (Mercury direct) replaces an older person (Saturn retrograde). 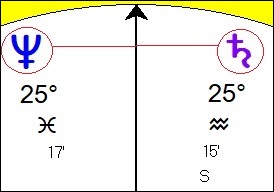 3. Mars in Aries all month encourages direct, honest expression at work, play, and home. Those who have been diplomatically holding back for too long are celestially encouraged to be more forthright. The tension between restraint and bluntness is strongest between the 5th and 7th when Mars octiles (45°) Saturn. Between the 13th and 16th when Mars conjoins Chiron, watch out for overly aggressive behavior or, to the contrary, feeling weak and ineffectual. Moderation is the best way forward under this influence. Mars squares Pluto from the 29th into early July: watch out for extreme measures taken upon yourself and others; play fair.

4. The Full Moon in Sagittarius takes place on the 14th, modified by a harmonious sextile to Saturn and a challenging square to Neptune. This restless, talkative lunar phase stimulates travel, debate, and the quest for meaning in what sometimes seems like a soulless society. Neptune’s influence confuses issues and blurs the facts, while Saturn’s influence promotes practical solutions with real consequences. The Full Moon chart set in Washington, DC, suggests some positive political action as Pallas, the political strategy asteroid, is conjunct the North Node and sextile the Cancer Ascendant (ruled by the Full Moon). Jupiter, in pioneering Aries, is near the Aries Midheaven suggesting that progressive legislation is in the works. 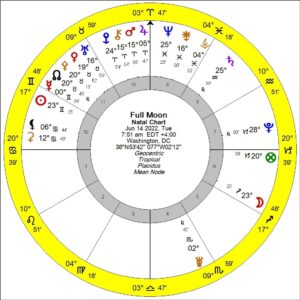 5. Juno sextiles Uranus on the 17th, and is in an active dynamic from the 11th to the 23rd. This favorable combination helps build and sustain friendship between committed partners, which includes business as well as more intimate relationships. Those under the influence of this transit will likely find increased intuitive connections, mutually enjoyable activities to share with their significant other, and a growing sense of stability in these tumultuous times. Those not in a committed relationship may find themselves spending more time with a married couple or a close relative who is married. The mutual interest is based on comfortable companionship and common interests. 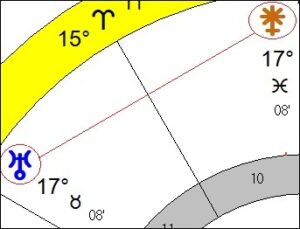