1. The Sun in Taurus sextiles Mars in Pisces on the 7th, and these two are within effective orb from the 1st–11th. This high-powered, energetic combination is great for getting things done, especially at work or in business. This harmonious Sun–Mars connection enjoys recreational activities, all sensual exchanges, and working or playing with physical objects. It’s especially favorable for gardening, hikes through non-urban areas, or otherwise getting in touch with Mother Nature. The 4th is extra favorable for starting new projects, since the Sun conjoins Uranus while sextile Mars. On this date, expect the unexpected — and that it can be good. For a few lucky ones, this three-planet alignment will bring a windfall. 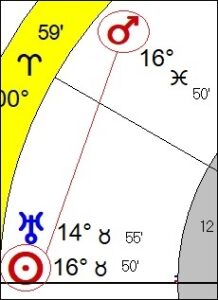 2. Mercury turns retrograde on the 10th in Gemini, its own sign. For the next three weeks (through June 2), Mercury may encourage you to rethink your ideas and projects as new information or shifting dynamics become apparent. This retrograde cycle may not be as upsetting as other Mercury retrogrades since Mercury is mostly making harmonious aspects. Still, be prepared for changes by having options; be flexible and adaptable to make the best use of this time. The 18th–23rd is an especially favorable interval for traveling, re-formulating or modifying plans, and having a positive outlook, perhaps after getting some good news. The 22nd–26th is best for organizing your resources and getting your finances in order.

3. Jupiter enters Aries on the 10th where it remains through the end of October when it retrogrades back into Pisces. For nearly six months, Jupiter in the first fire sign inspires new beginnings, increased optimism, and attractive opportunities as a general trend, but especially for those with planets in the first decanate (first 10º) of Aries. Those with their Sun, Moon, or Ascendant in early Aries are particularly favored by this passage. Jupiter in Aries tends to make people louder, more excitable, energized, and exuberant. The downside is that many will become less empathetic and more self-centered. This may become a noticeable pattern after Mars enters Aries on the 25th.

4. The Lunar Eclipse in Scorpio takes place on the 16th and is an important one for many since the Sun–Moon polarity squares Saturn in Aquarius. The rising cost of gas, food, and housing will likely be among the top concerns. Those with the Sun or other key placements in 23º–27º of the fixed signs (Taurus, Leo, Scorpio, Aquarius) will be most affected by this eclipse, and are likely to already be aware of tension due to Saturn’s pivotal influence. This fixed t-square can make things break under pressure (including budgets, relationships, jobs, and health), but a concurrent Mars-Neptune conjunction in Pisces helps to facilitate a way out. The week leading up to this eclipse is a good time to take care of business, do what’s necessary, and be practical. 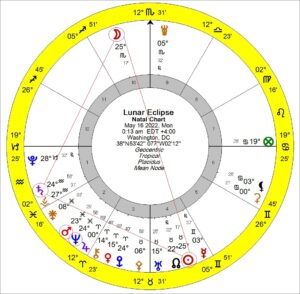 5. Jupiter is octile (45º) Uranus on the 11th, and this volatile, exciting combination can be felt from the 5th–19th. It gives Jupiter’s entrance into Aries a powerful, dynamic kickoff, and urges many to break away from any stagnant situations. Those most under the influence of this astro event will be prone to impulsive actions, spontaneous travel, and expensive purchases. Plans may shift suddenly after Ceres enters Cancer on the 14th, when family concerns take top priority. Ceres squares Jupiter on the 19th and this influence is in effect from the 14th–22nd. Consider spending more time with parents, children, or other relatives and doing something different with them than usual.