We are in the waning days of Uranus in Aries. To place this briefly in context: Uranus initially dipped into the sign of the Ram in May to August 2010, when the very dramatic first chapters of the Arab Spring were unfolding in the Middle East.

Uranus entered Aries to stay on March 11, 2011 — the very day of the Fukushima Daiichi nuclear disaster: an earthquake, followed by a massive tsunami that led to the meltdown of three nuclear reactors.

September 17, 2011 was the first day of Occupy Wall Street, the activist movement bringing the implications of enormous financial inequality into the mainstream. Black Lives Matter, now an international movement, began with the use of hashtag #BlackLivesMatter on social media in 2013.

January 21, 2017 brought the Women’s March, a worldwide demonstration in reaction to Donald Trump’s inauguration; between 4 and 5 million people participated in the United States alone.

A recent bookend of Uranus in Aries on the world stage was on November 18, 2018, when Uranus had retrograded back to 29°, and the yellow vests movement in France brought mass protests into the streets with rowdy (at times, violent) demonstrations calling  for economic justice.

Global uprisings and ubiquitous identity politics notwithstanding, Uranus has been working in each of us in unique ways. At the very least, for many, the natal house with Aries on the cusp has been turned inside out and shaken, stirred, and rattled at various moments these past seven years.

In my case, Aries (using whole sign houses) is my natal 6th house, and one obvious manifestation is that my working office (different from my consulting room) is a completely disorganized mess. Books — to be reviewed or having been reviewed — stacks and piles of papers, bills, letters, client notes, sketches and thoughts about mundane events, family matters, upcoming (and long past) local cultural events, recipes, photos — it’s all there in one big jumble. (This is a perfect demonstration of a recent song: Frank Ocean’s “Thinkin Bout You,” which begins: “A tornado flew around my room before you came, excuse the mess it made.”)

Although Uranus ingressed into Taurus from May to November 2018, it moves decisively into the sign of the Bull on March 6, 2019 — no more backtracking into Aries.

Still, these few weeks before the Taurus ingress are bound to be important. On a personal level, affairs connected to the natal house where Aries resides are open for one final clearing and completion. Mars is part of the wrap-up crew since he entered Aries, a place of rulership and strength for the rabble-rouser, just as the New Year turned: the night of December 31, 2018 (PST). 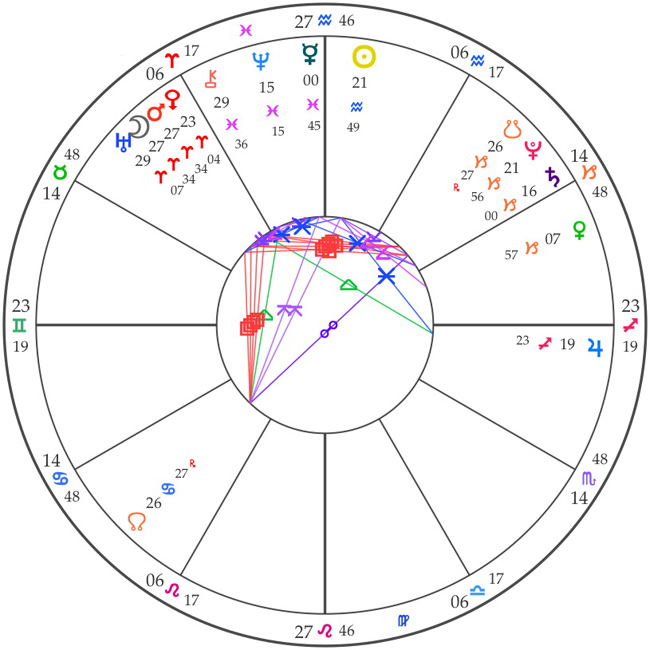 (This chart is arbitrarily set for my place of residence; the conjunctions will occur in different houses relative to location.)

Another feature of these particularly volatile few days: Mars and Uranus are nearly precisely parallel in declination from late January through mid February; on February 10, Mars is at 11° North 00’ and Uranus is at 10° North 41’. 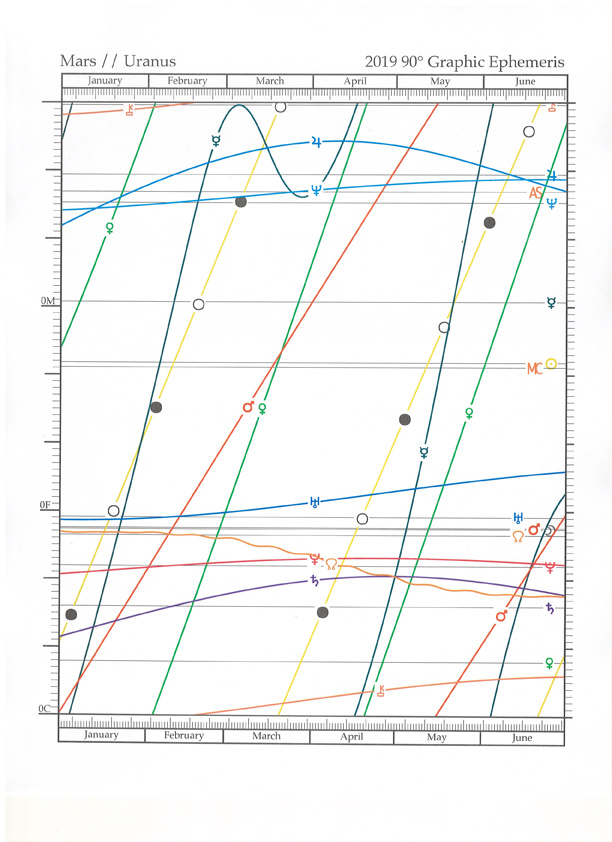 (The Mars line is red, Uranus is blue. See the name of the month at the lower edge and look up to see these two lines crossing in late January and early February.)

The combination of Mars and Uranus, both conjunct in longitude and parallel in declination just as Uranus has his last moments in Aries (until 2094), is quite striking. This is a turbulent combination of forces. At the milder end of the scale, the heat of Mars and the instability of Uranus suggest impulsiveness, capriciousness, or a blind obstreperousness in our response to personal situations; more worrisome possibilities include explosive tempers, dangerous accidents, or destabilizing and distressing overall mayhem. Surely, those who are able to maintain a cool state of mind in whatever situations arise will be worth their weight in gold.

Those of us with personal points in the horoscope in close aspect to Uranus are typically sensitive to that planet’s ability to herald disruption — sometimes with a creative outcome, once the dust has settled.

I’m thinking it might be wise to stay aware of what might be bothering us these few days — this planetary combination may provoke irritation. It’s best, perhaps, to explore any irritable or anxious feelings from the inside out. A clear communication with someone in our lives may be a result, or we may be able to expose what has been holding us hostage and bear witness to a new dimension of our own psyches. We are surely at a time when focusing the fire of the moment toward self-awareness might be fruitful indeed.