The following is a collection of information on the upcoming Venus-Sun conjunction at 29° Libra. The first article, from August 2022, is kindly reproduced from Arielle Guttman’s Venus Star Point Newsletter. Arielle originated the term Venus Star Point (VSP), a refinement of the meaning of a Venus-Sun conjunction which is detailed in the work represented here. Second, is a short article (slightly edited to TMA style) reproduced from the Cosmic Intelligence Agency (C*I*A) which references a current news story and has a handy list of upcoming Venus Star Point changes. Finally, I’ve included a list of additional resources on the Venus star cycles.

Beginning with insight into Venus’s uniquely symmetrical astronomical cycle, Arielle Guttman has done groundbreaking research revealing implications of the Venus star cycle across cultures, historical cycles, in current events, and in our personal lives. Her book, Venus Star Rising: A New Cosmology for the 21st Century, was published in 2011.

On her website, Arielle writes: “… in 2004, during the first transit of Venus across the Sun, Venus began streaming information to me about her pentagram and individual star points. It was a body of knowledge (I was ‘told’) might take a full century for people to really grasp.”

Arielle has taught extensively and has been the inspiration behind the phenomena that has captured the world: over 40 million links were returned when I did a quick online search for “Venus Star Point.” (At the end, I include additional links from two serious astrologers’ works. There are many more — as is Venus’s want. Please enjoy your journey.)

If you don’t know of Arielle’s work, her website, has lots of articles, information about her Venus Star Point course, and many videos. She also has a YouTube channel. (And for the curious, here’s Arielle’s birth data.) 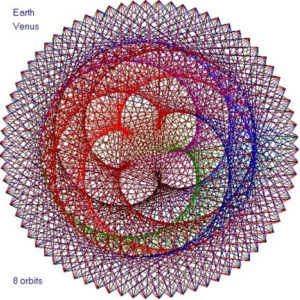 On October 22, 2022, for the first time in 150 years, the Venus Star will enter the sign of Libra. The slowly moving rotational star clock of Venus transits through a sign of the zodiac at various intervals in history, spending 100 years in a sign (on average). Then, for 150 years it is absent from that sign. The last passage through Libra occurred from 1771 to 1880. Certainly, we can agree it was an incredible time period of history. With the birth of two new and important democracies, following the American and French Revolutions, one can only wonder what miracles will be birthed in the coming cycle.

To sum it up, no one alive in our present era has witnessed this passage. Yet we are aware of it from the countless ways the events of that time have been documented and how it has shaped both our past history and the present unfolding of events.

Of course, a 100-year passage of a transit through a sign covers much ground. Where do we begin to interpret the impact of such a long transit? One of the first things we can do is look to the sign of Libra and what it represents. Libra, on one hand, represents the scales of justice and has to do with laws and the courts and the concept that a person is innocent until proven guilty and that everyone is entitled to a “fair” trial by a jury of law. Another facet of Libra is the goddess that graces this sign — Venus — and the idea of harmony, beauty, grace and the feminine.

And, the fact that its own planet, Venus, will be the one gracing it. This is a radical change from where that Star Point has been for the previous 100 years (1926–2026) — in Scorpio, governed by Mars, and secondarily by Pluto. So we are culturally and collectively switching gears from a Mars dominated culture to a Venus dominated culture. What type of changes might that bring in personal relationships, gender identification, gender classification in politics, religion and customs? Also, what new legislation might be forthcoming to emphasize such changes?

And there is more! One of the things I noted from the last passage was the proliferation of musical masterpieces. That which we refer to as “classical” music, came to be, mostly during the Libra Star of yesterday. In the last period of the Libra Star there was an extraordinary musical and artistic renaissance in Europe. The courts of Europe were filled with great music. The compositions of both Beethoven and Tchaikovsky came forth during that era. Will we see a renaissance in music once again in the new Libra Star?

Following, is a repost of a short blog (slightly edited to TMA style) from the C*I*A website.

The news of Queen Elizabeth’s passing is part of the global transition taking place as the Venus Star Libra Point gets closer to shifting for the fist time in our lives, as it transitions from Scorpio to Libra in October.

Like eclipses, the Venus Star Points become significant before the exact conjunction, and cross over with each other every 9.5-month period. The last Venus Star Point (in Capricorn, January 2022), the leading star of the current 584-day cycle, will now culminate, reach its outer conjunction peak, with the coming Venus Star Point at 29°26′ Libra and coming solar eclipse at 2° Scorpio (visible over Europe), [and will be] opposite Queen Elizabeth’s Sun, at 00°12′ Taurus. The end of this current cycle culminates in Leo at 20° in King Charles’s first house, to square his Sun, leading into the time of his coming coronation.

Venus, ruler of Queen Elizabeth’s Sun, is also currently entering the underworld, disappearing from light and into the Queen’s Porphyry 8th house. The Queen was born just before one of the rare Venus Star transitions, back from one sign to the next. [This was] when the Venus Star Point moved for the first time into Scorpio, in November 1926.

How amazing that we now see this same star point transition from Scorpio to Libra in October.

The last Venus retrograde and star point (in Capricorn, January 2022) was on the Queen’s Ascendant and conjunct her South Node, linking the 9.5-month cycles together in the Queen’s life.

The new King Charles has the Moon at 00° Taurus, in the 9th house, conjunct the North Node at the Midheaven. The new Libra Star Point aligns with his Uranus by trine, 29° Gemini, [in the] 11th house, and by sextile to his Jupiter, 29° Sagittarius, in the 5th house.

A Powerful Election for Venus Talismans is from traditional astrologer Peter Stockinger. He guides us in the significance of this potent Venus moment. He writes: “The fact that Venus is Cazimi, and essentially dignified by sign rulership in Libra would be enough reason to justify the construction and consecration of a talisman, but there are some additional factors, which make this election a very important one.
• The Moon is conjunct the Arabic Part of Fortune
• There are no hard aspects between the Sun/Venus conjunction and any of the other planets.
• Saturn, Mars, and Jupiter are essentially dignified.”

Chris Brennan and Arielle Guttman have a beautiful, wide-ranging discussion on The Venus Star Point Cycle on The Astrology Podcast (2:20). They cover the historical (and real time) significance of the current star point and also delve into Arielle’s work with Astro*Carto*Graphy, all the while displaying the general happiness of meeting your astrology friend face-to-face.

And finally, here’s an excerpt from Venus: Enduring Symmetry a TMA blog I wrote after I met with Arielle in 2011 which describes an essential aspect of Arielle’s approach.

“I spent most of the weekend contemplating and evoking Venus and Mars, who are conjunct today at 9° Taurus. Beautiful Venus, supremely at home in Taurus, bright in the pre-dawn sky, intimately cavorting with her paramour and consort, Mars. What a glorious suggestion in partnership is present for us in this planetary dance: pure desire and the appreciation of all that is beautiful become one, becomes obvious — we want what is beautiful to us. Our desire nature is melting into an experience of elegance and harmony, happiness is potentized, etc. …

“I was considering these matters when I got a surprising phone call from an astrologer traveling through Ashland for the night. I quickly made arrangements to go see her. The traveler is Arielle Guttman, author of a new book, Venus Star Rising, A New Cosmology for the 21st Century.

“Although we’ve spoken over the years, this was our first face-to-face ‘appearance.’ We talked about many things, including her book, which I have scanned (it has lots of graphics), but not read yet.

“I asked her if she was using Venus’s heliacal rise in determining what she calls the ‘Venus Star’ at birth. She explained that because of that slightly irregular timing and her obvious connection to the notion of cazimi, that is, a planet at ‘the heart of the Sun,’ the idea that she develops in the book is based on the inferior or superior conjunction of Venus before birth (the inferior is always the retrograde conjunction). In other words, the cycle does not begin with Venus’s observable appearance in the sky (i.e., the heliacal rise), but it begins with the cazimi, with Venus exactly in the heart of the Sun. (1)

“Arielle spoke of this degree as being our deepest, most natural talents and gifts. (The cazimi, whether superior or inferior, occurs pre-natally, when we are in the womb.) It has a different quality than our natal Venus placement. She explained to me the essence of how she uses the point, and its implications were quite obvious to me immediately …

“As a personal aside, and a testament to a living astrology, we discovered that Arielle has natal Venus at 5° Leo; I have natal Venus at 4° Aquarius. The most recent cazimi of Venus was on October 28, at 5°30’ Scorpio; we met face-to-face for the first time as transiting Venus was at 9° Taurus (conjunct Mars, as I mentioned at the beginning of this article). Within this fixed cross formation of Venus, I thank Arielle for taking the time with me (which certainly helped this blog to manifest), and for all the continual and blessed unfolding that we astrologers are privileged to notice.”