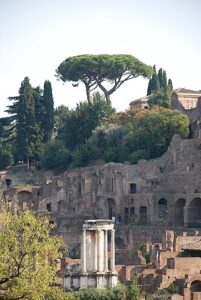 Asteroid Vesta’s three-month retrograde begins at 2:33 p.m. PDT, on Thursday July 7, 2022, when she’ll station at 6°53’ Pisces. On October 5, 2022, she’ll resume forward motion at 22°58′ Aquarius. Watch these sensitive degrees, especially if you have chart factors configured to them. Before we delve into the possible meanings of this retrograde, let’s review some astronomical facts.

In the gap between the orbits of Mars and Jupiter, a plethora of asteroids circle the Sun. According to Bode’s Law, a planet should occupy this interval. (1) Before modern space exploration, people imagined that perhaps a planet did once exist there, and a catastrophic event shattered the integrity of that body into the symbolic and literal mess we find there today. Now we know that we are witnessing the slow coalescing of matter into a future planet, were it not for Jupiter’s immense gravitational pull.

On January 1, 1801, the dwarf planet Ceres became the first object noticed in this region. Pallas and Juno followed suit. And, on March 29, 1807, German astronomer H. W. Olbers found a fourth celestial object in this sector, and his colleague Carl Friedrich Gauss named it Vesta, properly known as 4 Vesta. It would be 38 years before any other asteroids were found in this area of the solar system.

Scientists believe that the surface of Vesta is one of the oldest intact surfaces on a celestial body in our solar system. As a protoplanet, Vesta has a mantle and core … but she cooled quickly, and the resurfacing behaviors seen on larger bodies failed to materialize. NASA’s Dawn mission (2007–2018) orbited Vesta, mapped her surface, and gathered important data confirming that the HED meteorites on Earth stem not only from her surface, but likely from a single massive collision that catapulted 1% of her mass into space and crushed her South Pole into a crater the size of our Pacific Ocean. (2)

Vesta’s cycle around the Sun takes 1,325.6 days (3.63 years), about twice as long as Mars. However, when her cycle resets, Vesta will not be in the same place in the tropical zodiac seen from the Earth. It takes eight full synodic cycles for Vesta to appear in the same zodiacal degree — that’s 29 years.

German astrologer H. C. Meier-Parm has pointed out that eight orbital cycles of Vesta equal one Saturn cycle (10,759.2 days). (3) Every time Vesta’s cycle resets, Saturn is 45° further along in the zodiac. After eight of her cycles and one of his, Vesta and Saturn can be found at the same degrees as they were 29 years prior. This eightfold symmetry in the orbital behavior of Vesta and Saturn, Meier-Parm argues, may be linked to an older version of the zodiac that only contained eight — not twelve — signs and was aligned with the seasonal year and cross-quarters. (4)

Meier-Parm also notes that Vesta appears to be strongest in between 15° Virgo and 15° Libra (5). If one were to ascribe rulership to an asteroid, this would be her territory, he claims. In my own work, I’ve found Vesta to be most aligned with Virgo, however as befits her symbolism, her house placement in a chart seems to carry more interpretational weight than the zodiacal sign she occupies.

See Vesta with Your Naked Eye

Vesta’s immense brightness means she can be seen by the naked eye. In fact, she’s the only body in the main asteroid belt who can be seen this way. As Vesta’s retrograde path brings her closer to the Earth, she will assume the brightness of a sixth magnitude star, and under favorable conditions we can see her with our unaided eyes. From August 2 to September 11, she’ll be within the +6.5 brightness required for bare vision viewing.

Asteroids do not move enough in one evening for you to differentiate them from fixed stars, so you need to plan to go outside at the same time of night a few nights in a row. On the first evening, create a reference image. On the next night, you can spot her by seeing which point of light has shifted slightly. After locating her, you can continue to track her movements relative to the fixed stars on subsequent evenings.

On August 22, 2022, just two days after reentering Aquarius, Vesta will oppose the Sun (at 29°39’ Leo) and, with a brightness of +6.1, should be visible in a moonless night sky around midnight between the constellations of Aquarius and Capricorn, just above the constellation of Piscis Austrinus. (6) Even though she’ll be past her peak apparent magnitude, the days leading up to the New Moon on August 27 may be the best time to view her.

Here’s another way to find Vesta this summer: Find Saturn. Then fully extend your fist from your body and align your fist with the light of Saturn, and Vesta will be just to the east and south of him, just inside the span of your outstretched hand, which covers about 10° of space. (7)

The Astrological Importance of Vesta

If the Sun represents the spark of life, a fire that can never be touched directly, Vesta is “fire that warms but never burns.” (8) She is a fire we need to touch, for our own survival. The Roman goddess Vesta (Greek, Hestia) symbolized the very real social importance of fire. Without it, one cannot stay warm, eat cooked meals, or see in the dark. Venerating fire, in premodern times, was essential to the maintenance of human life. In ancient Roman culture, the Vestal flame was a symbol of the state itself. Everything revolved around the hearth, it was the literal focus of the family. The Vestal flame must be tended and kept burning at all costs or the State would suffer. And when you handle fire, you must maintain your focus, or it can expire or spread out of control very quickly.

Early interpretations of Vesta’s astrological meaning lean into the mythology of Vesta and her cult of the vestal virgins, who operated outside society according to strict codes of social conduct. Six women tended the sacred flame and created ritual products for households across the empire. Each woman served for 30 years, and was around 40 (pre-menopausal) by the time she was finished. Thus, when speaking of Vesta, astrologers evoke topics of control, denial, sacrifice, and, I argue, overemphasize the concept of “virgin.” These interpretations implicitly align with patriarchal control of women, as if entering the vestal order were a negative thing, and the sacrifice of a certain social path a terrifying prospect. They assume that a woman is giving something up by not becoming a wife and mother, and that this is a painful path. Let’s ask a new question: In the absence of those roles, what is gained?

Standard takes on Vesta erroneously overlook the freedom of operating outside the trajectory of heteronormative marriage and family-building. By becoming a vestal virgin, one was liberated from becoming the property of a man (his wife) and the producer of child/-ren (a mother). As I show in my article about Vesta, in issue 221 of TMA (order here), the sexual taboo of the Vestal order wasn’t about not having any sex, it was about not having sex that led to pregnancy and childbirth.

And there was no moral sting about it. It was a very tangible and practical problem: You try tending a flame while breastfeeding a squirmy baby or chasing a tyrant toddler. As author Penelope Trunk once put it, parenting is “permanent interruption.” (9) So, if the goal is to focus on fire, one cannot parent or address anyone else’s needs. Not even a husband’s. And what happens when you’re not busy doing that? You get creative control. A room of one’s own, as Virginia Wolfe put it. Vesta’s placement in your chart by house indicates an area of life that you must keep to yourself, do on your own, under your own control, with no interference from external distractions or human relationships.

As Vesta circles back to the late degrees of Aquarius, she will tell a potent story of where in our lives we exert creative control or have our creative capacities controlled by others.

On May 2, 2022, as Vesta entered her retrograde shadow zone at 22°58’ Aquarius, the US Supreme Court leaked news about their impending decision to overturn Roe v Wade. Five days later, Vesta conjoined Saturn at 24°35’ Aquarius. On June 24, two days after retrograde Saturn re-entered 24° Aquarius, the court announced their controversial, yet expected decision.

When Vesta goes direct at 22°58’ Aquarius on October 5, the Moon will be in a partile (though separating) conjunction with Saturn at 18° Aquarius and applying to conjoin Vesta, highlighting the May conjunction of Vesta–Saturn. On November 1, 2022, as the results of the mid-term elections come in, the Moon will conjoin Saturn and Vesta once again. Reproductive justice will continue to be a key topic for the foreseeable future, and Vesta’s movements help us time when we can expect new developments on that front. Keep an eye out for the following dates:

• On October 26, 2022, Vesta will traverse 24°35’ Aquarius for a final time, just before the mid-term elections, evoking her conjunction with Saturn from early May. At the same time, she’ll form a grand trine to Mars (at its station degree of 25° Gemini) and Mercury (24° Libra). Something occurring this day could have some significance as the election looms.

• On January 22, 2023, Venus will conjoin Saturn at 24° Aquarius and Uranus will station direct at 14° Taurus, the degree it occupied during the Supreme Court leak in early May. As the newly elected officials from the US midterms begin work, this will be a very potent week, hopefully in an ameliorating way. This date may also invoke events that take place on August 24, 2022, when Uranus stations retrograde at 18° Taurus, two days after Vesta’s maximum apparent magnitude, still visible to our naked eyes in the night sky.

As for your personal experience of this retrograde, find the house(s) in your chart containing the degrees of her retrograde path. As she transits through a house, she helps bring focus to that area of life. Meditate on the ways you can reclaim your power in that domain of experience. Perform rituals of invitation to her. Cut cords where they do not belong. Dedicate yourself to the work that is solely yours to do.

Above all, once you have focused, (pun intended) on Vesta’s placement in your chart and through this retrograde transit, try making space for that area of your life to be yours alone, and communicate your boundaries with others around this facet of your life. Vesta gives you the gift of your own hearth, your own direct access to what truly keeps you warm and fed. The vestal virgins worked in shrouded secrecy, yet their labor spread essential fires to the entire realm. Once you tend your inner flame, you will have surplus for every other domain of your life. When we cultivate our Vesta placements, we alleviate burnout and recharge ourselves for the collective work ahead.

Jenn Zahrt, PhD is the senior editor of The Mountain Astrologer, the founder of Revelore Press, and the director of the Celestial Arts Education Library (CAELi) in Olympia, WA. She’ll be speaking about Vesta (and more) at the Northwest Astrology Conference (NORWAC) in 2022. You may check out her Vesta oils on her website: jennzahrt.com