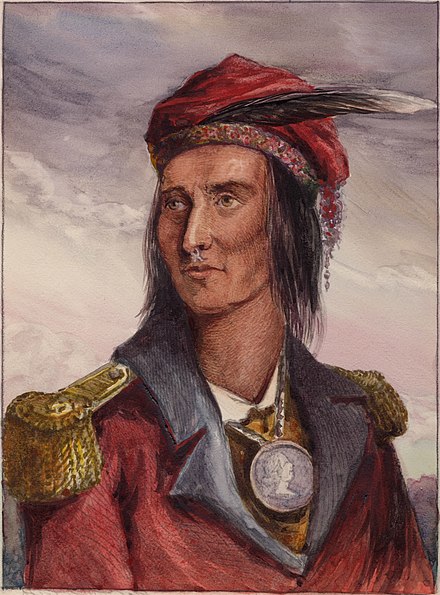 Painting of Tecumseh based on an 1808 sketch (Wikipedia)

Karen Christino is a long-time astrologer, writer and researcher. Her latest book, Tecumseh’s Curse is a marvel.

By some measure of astrological lore entering the mainstream of public consciousness, Tecumseh’s Curse might be close behind the phenomena of Mercury retrograde and the void-of-course Moon.

The basic idea of this specific “curse” is the pattern that connects U.S. Presidents selected during election years that end in zero, and death in office. The very rough, and often-referenced outline of the pattern, begins with William Henry Harrison. Elected in 1840, Harrison was the first president to die in office. Abraham Lincoln, elected in 1860, Andrew Garfield (1880), William McKinley’s 2nd term (1900), William Harding (1920) and John Kennedy (1960) are some others who follow this basic pattern.

Tecumseh (born in 1768) was a Shawnee chief whose story is woven into Harrison’s election story. About Harrison, she writes: “He was elected in 1840 by touting his role in driving the Shawnees and other groups out of the Northwest Territory. Some have suggested that his history of conflict with Tecumseh, Tenskwatawa, the Shawnee coalition and numerous other Nations set him up for retribution and an Indigenous curse.”

Christino’s book is a nuanced and wide-ranging weaving of this history and sophisticated astrological analysis.

Years of study inform the book: In an email, she told me that she’s been “haunted” by the topic since the Uranus-Neptune conjunction in the early 1990s. COVID gave her time to deepen her ongoing study of Maya, Aztecs, Incas and North American astrologies. She wrote: “….the pandemic gave me more time to dig into some of the Turtle Island information as well as the Indigenous voices and get a better picture.”

That picture is wonderfully drawn out in Tecumseh’s Curse, whose subtitle themes — Indigenous Wisdom, Astrology and the Deaths of U.S Presidents — are all covered in enormous detail.

In Part I: The History, the author takes us on deep exploration into the roots of Shawnee culture whose homeland was the Ohio River Valley. I was enthralled by her respectful, affectionate and knowledgeable writing on this chapter of Native American history. She looks back to burial mounds and ceremonial centers established by the Adena people (1,000 to 200 BCE), and carries forward in time to the war chief Tecumseh and his mysteriously powerful brother, Tenskwatwa.

Intriguing historical details inform all parts of the book: “He [Tenskwatwa] was a triplet, and one of the infants died soon after birth. The Shawnee medicine man and prophet Penaghashea (Change of Feathers) may have suggested that some of the infants be killed as multiple births were unusual and could be a grave omen.”

Part II: The Mystery is an account of Sacred Time and Space; Curses, Omens and Prophecies, and Shamans and the Moon.

In Part III Christino analyses the horoscopes of the relevant presidents (including Biden), their inaugural charts, synastry with the U.S. horoscope, and much more. Parallels of declination, eclipses, longer planetary cycles, André Barbault’s Cyclic Index are a few of the many techniques she uses.

There are Appendices, Chart Notes, Bibliography, many illustrations and quotes. From Tecumseh: “Sing your death song and die like a hero going home.”

Christino is a wonderful writer. This is not beginner astrology, however, but rather a comprehensive (and accessible) study. Although the Jupiter-Saturn 20-year cycle is often noted as the most striking component of the pattern, the author discusses many other planetary patterns: “Astrologer Kelsey Richfield identified the recurrence of the Moon, Mars and Nodal afflictions in U.S. progressed to natal aspects at the time of the presidential deaths, along with those between the fated presidents and U.S. natal horoscope (see Appendix 4). Many of the zero-year presidents as well as some of their inauguration horoscopes also have Moon-Mars aspects.”

Tecumseh’s Curse: Indigenous Wisdom, Astrology and the Deaths of U.S Presidents is an exceptional work from a seasoned astrologer who weaves techniques and historical details into an engaging, evocative and substantive book. Highly recommended (and a bargain price too): the paperback is $12.99; Kindle is $5.99.