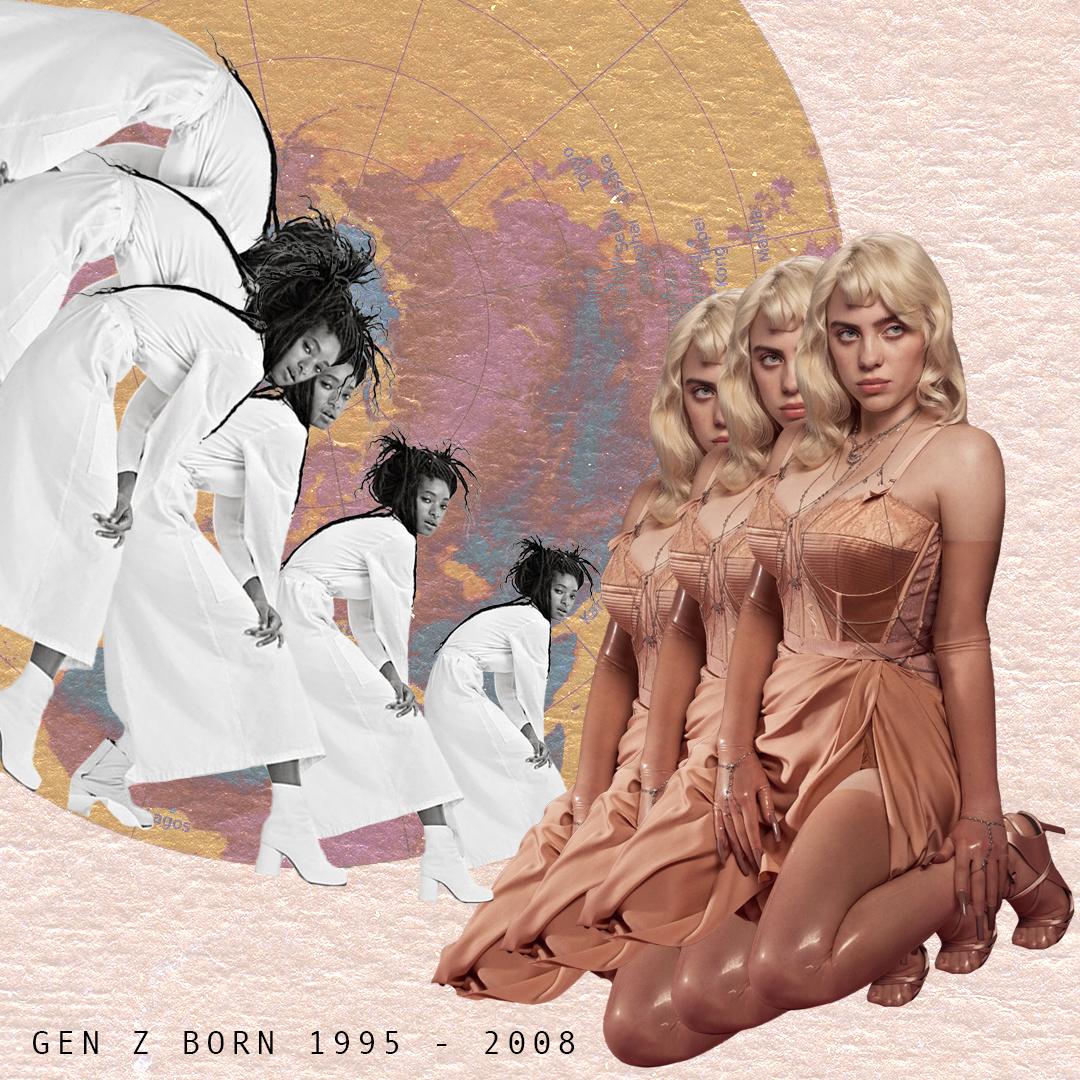 I am a native Gen Z born in 1997. Astrologically speaking, Gen Z is the Pluto in Sagittarius generation spanning 1995-2008.*(dates below) As a hyper-globally connected digital native, who hasn’t known a world pre-internet and couldn’t navigate a city without Google Maps if my life depended on it, I am your Generation Z exemplar.

My early years were spent online, leaving awfully embarrassing digital traces behind me on now long-gone social networks (remember Bebo or MSN Messenger?) in spite of my mum’s best efforts to ‘ban’ me from using them. But we also had our iconic toys of the decade—Bratz Dolls, the bad bitch version and racially inclusive version of Barbie was the shit. Maybe they were a tad overtly sexual for preteens, but their attitude and aesthetic is LITERALLY how Gen Z presents themselves today—rebellious, edgy, with style rooted in the nostalgia of the late 90s and early 2000s (even if we were too young to remember those times).

We’re Optimistic Nihilists
By 14, I was already snapping away on Snapchat and posting tragic selfies on my first Instagram account. Yet, it was our beloved Vine that defined the humor of our entire generation. The essence of what made a good Vine was unexplainable, but yet you just knew when you stumbled upon gold. RIP—we will never forget you, and I will continue to watch old Vine compilation videos until the day they stop being funny (i.e. never).

Marketing teams are freaking out about how to capture our fragmented attention like we’re some breed of alien (most of us are probably starseeds, but you know, it’s chill). We casually flick from Instagram to Netflix to Facebook Messenger, all whilst perfectly eating our Uber Eats sushi with chopsticks. It’s our natural state—we don’t know how to focus solely on one thing, being born into an over-stimulated environment where we fed on a diet of global 24/7 media.

What businesses need to understand is that we aren’t going to buy into corporate fuqery and greenwashing tactics, because we require Sagittarian values of truth and honesty. But not the kind that’s sloppily based on virtue signaling or ‘being authentic’ (*cringe* – leave this to the Millennials). We want a real sense of integrity, the BTS and unphotoshopped version, and we can naturally sniff out who has it in seconds.

The Difference Between Gen Z & Millennials? Gen Z Is Cooler
So what actually is the difference between Gen Zers and Millennials? We used to get lumped in together as all ‘young people’ before the differences became blatantly obvious. For starters, we came of age in different eras—the defining moment for Millennials growing up was 9/11, where in contrast I was too young to have any clear memory of it (arguably, the Coronavirus will be Gen Z’s defining life event).

Millennials are generally more idealistic than your average Gen Z—whilst they were entering the workforce during the GFC, Gen Zers were still at home, watching our parents lose jobs, houses and their income streams. It profoundly shaped our approach to money—we prefer to save and are generally more frugal. Millennials will splash out on ‘experiences’ with ‘good’ customer service. The proverbial Millennial participation trophy can be attributed to being coddled by their Boomer parents; our Gen X/Pluto in Virgo parents tried to do what they could so we didn’t end up the same.

Demographically, we’re the most diverse as well as the most educated generation yet, a likely influence on our globally-minded consciousness and ethical consumption habits. Getting a degree no longer sets you ahead in the career marketplace—it’s now a mandatory requirement for Gen Zs in order to eventually earn a decent wage, unless of course, you were able to kickstart a lucrative career online as a full-time content creator (exhibit A: Emma Chamberlain).

We Can’t Read Analogue Clocks – So What?
Despite the chaos of growing up and living in the 21st-century world, we’re surprisingly chill and pragmatic. Like Sagittarians, we’re optimistic nihilists and realists at heart. We can turn any bad situation going on, including our crippling mental health, into some hilarious meme, which takes skill by the way. So let’s be real, everybody knows our generation is way cooler than everyone else’s. And it’s funny because we’re not even trying.

Essentially, we were born tapped straight into the Zeitgeist, or more like miles ahead in a league of our own. Yeah, maybe we don’t know how to do maths without a calculator or read an analog clock. But we’re in the Technological Age now and you got to get with the program. We were born with media literacy running through our veins and the ability to adeptly handle the pressure of information overload.

It’s a strange hyperflux-technological-reality we find ourselves in today, which might be jarring for older generations. But for us it’s comforting. And the only version of ‘normal’ we’ve ever known.

Editor’s note: Here’s a link for a peek at Billie Eilish. (Scroll down to her horoscope, as there are other news events in the post.)