We assembled a few links in honor of the summer solstice. Enjoy this turning day on the wheel of the year, wherever you are!

No matter where you fall on the spectrum, whether brand new to astrology or more seasoned, our Student Section offers readers wisdom and insight from various astrological lineages and branches.

Birth data are confidential, but the source is birth certificate.

Q: I am very interested in the career potential that you see in my grandson’s chart. He is interested in becoming a veterinarian. What does the chart show?

A: Your grandson was born with a powerful 29° Sagittarius Sun, conjunct Pluto, and a grand square in fixed signs, expressed through his 10th-house Mars in Taurus. Often people with strong Sagittarius love teaching, philosophy, travel, and international professions, while the strong Pluto suggests someone who will work to change existing systems and solve problems. Both of these together give him a determined personality, with a tendency to be very fixed in his ideas and beliefs.

The 29th degree of any sign heightens the best and worst qualities of that sign, and with Sagittarius you have “the seeker” archetype: a person who is highly idealistic, with lofty goals and expectations, but a tendency to get scattered and have too many competing hopes and dreams. Sagittarius values learning, freedom, and truth, however they define it. With the Sun on the cusp of Capricorn, there is some pragmatism in your grandson’s personality, but with Pluto so close to the Sun, the symbol of identity and purpose, he can struggle with uncovering who he really is. Pluto is associated with great personal power, but often brings about a life full of searching to uncover the deepest, truest self. You might see him periodically re-invent himself, and move from being intensely passionate about one thing to being intensely passionate about something else, since Pluto tends to be associated with profound personal discovery. Pluto conjunct the Sun can suggest great extremism and a tendency to look at life and personal choices in a very all-or-nothing manner, particularly during his youth. On the other hand, people with a strong Pluto are drawn to healing and have deep capabilities to find solutions to problems that are complex and often hidden — a good quality in a vet. Your grandson’s Sun, Pluto, and Mercury are in his 5th house, which is associated with personal creativity as well as showing a love of small animals.

Fixed signs, of which your grandson has five, are associated with tremendous determination, a strong will, and great perseverance. On the other hand, fixed signs can struggle with fear of change, difficulty letting go when things don’t go their way, and sheer stubbornness. Four of the planets in fixed signs fit together into a grand square, an indication of much internal struggle. With Saturn, the taskmaster, in the 1st house, he tends to have high expectations of himself and can feel burdened by responsibilities, both real and imagined. Saturn lends practicality to how he expresses his fiery, creative Leo Ascendant, but there is a lot of internal conflict indicated as well. Saturn, the most realistic of all the planets, is squaring Jupiter, the planet of faith and optimism, while it opposes Neptune, a planet of even greater dreams, aspirations, and inspiration. Both Jupiter and Neptune expand his hopes and dreams, and can create difficulty with motivation and follow-through. He can quickly go from excitement to overwhelm. When young, this pattern of the grand square can cause lots of stops and starts and changes in direction on life’s path, but over time can help him to find a deeply anchored security.

Mars, the only personal planet in this pattern, represents your grandson’s motivation and capacity to take initiative. Mars is in earthy and grounded Taurus, in the 10th house of career. This suggests that he wants very much to find a hands-on profession where he can work hard to create some financial security for himself. When Mars squares Saturn, there are often issues with not doing enough or doing too much, or with being a strong starter but falling into self-doubt and insecurity, Saturn’s domain. On top of that, when Mars opposes Jupiter and squares Neptune, they raise your grandson’s hopes and expectations of things simply working out, or of things expanding easily without all of the ground work or foundational aspects being in place. In addition to this, he lacks planets in cardinal signs, which are associated with ease in taking initiative. Learning to temper his expectations and set grounded and realistic goals would be extremely important in helping him to succeed.

His Moon is in Virgo, another practical earth sign, in the 2nd house of money and values, giving him a strong need for financial security and the desire to find work to fulfill that. The Moon trines his Sun, in a disseminating Moon phase, which is associated with success, particularly in teaching and sales. His Moon also opposes Uranus, the planet of sudden and unexpected changes. This is sharply at odds with the fixed square in his chart that resists change. I would imagine that he will stay in a secure and predictable pattern in his life until he can no longer bear it, and then suddenly, to everyone’s surprise, change directions abruptly and with a lot of excitement. There is an element of independence and originality with this aspect that can bring heightened creativity, but both the Moon and Uranus are in houses associated with finances, and the position of this opposition is known for great ups and downs with money.

This is a chart of someone who will most likely have more than one profession in the course of his lifetime, possibly focusing on healing and helping animals, but also wanting to take part in making the world a better place by reforming systems in education or even finances.

Bio: Moon Zlotnick began practicing astrology 1975 and then received formal training in 1979 with Zipporah Dobyns through her Los Angeles school CCRS. Since then, Moon has worked with clients full-time, taught astrology to beginners and seasoned students alike, participated on the boards of ProSig, OPA, and STARS and been to many national and international conferences. She has been certified through OPA and currently leads. Her book, Star Sisters: An Astrologer’s Memory of Twin Loss, is available on Amazon. Moon’s website: astrologybymoonrabbit.com

TMA lunation charts are all set on the natural wheel with 0° Aries rising.

The Cancer New Moon attunes us to family themes, especially maternal roles modelled from previous generations. The New Moon is in its natural sign and conjunct Black Moon Lilith, adding a distinctive edge: the traditionally caring, devoted mother figure or wife takes a backseat to one who rejects a subservient or second-in-command role. 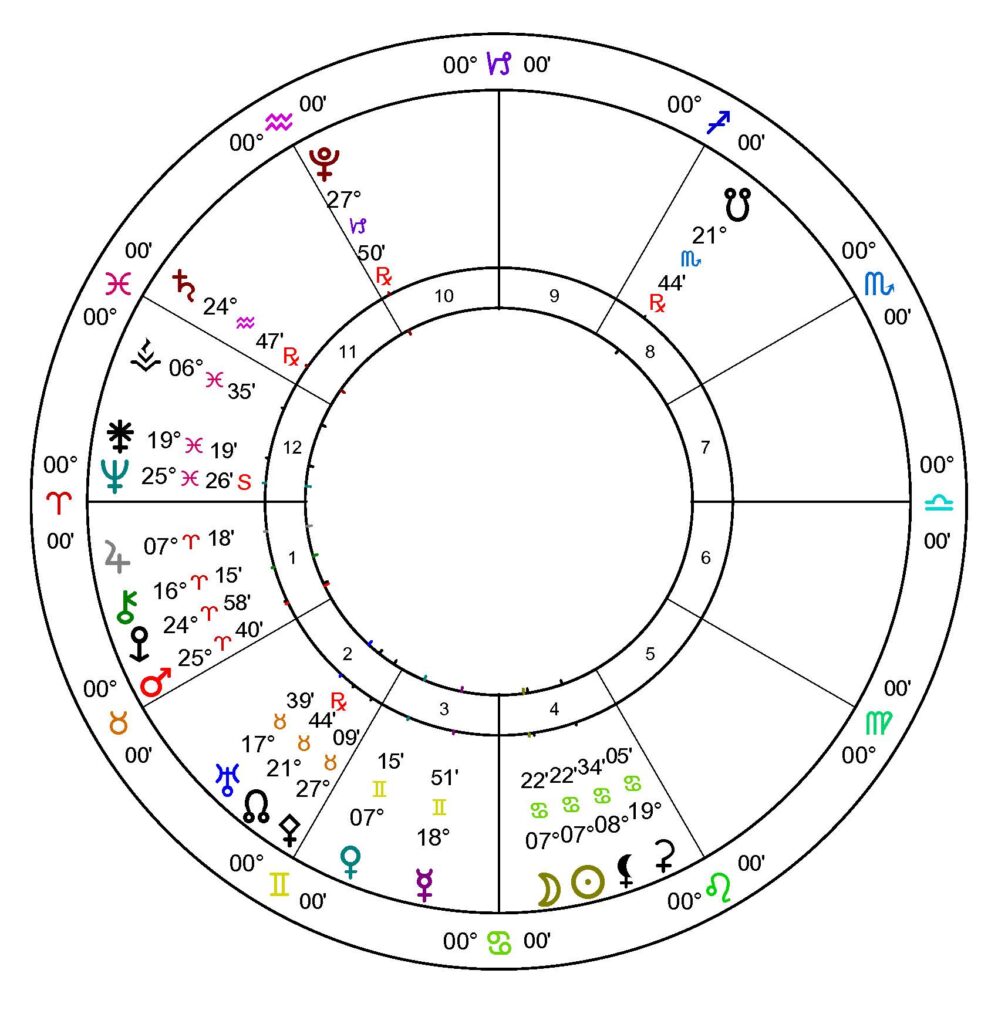 The Capricorn Full Moon emphasises duty, responsibility, and authority — areas we may be grappling with internally or externally. It follows the Moon’s opposition to Mercury, suggesting discord and disagreements: it can simply be difficult to find middle ground between points of view and methodologies under such stars. But try we must, because the Full Moon can be such an intense time, pushing our capacities to their fullest as well. 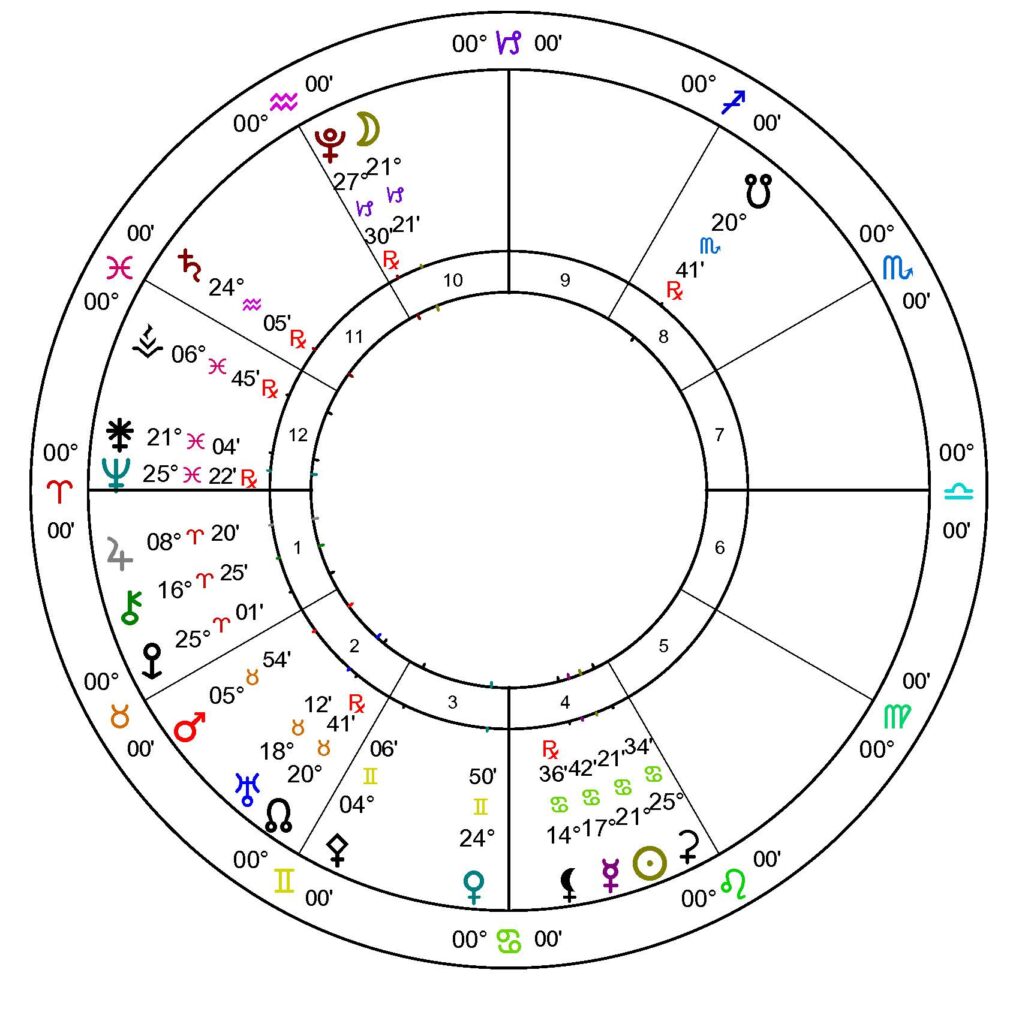 The Leo New Moon brings an injection of fresh energy into our lives, which could be accompanied by a large helping of drama, too. As far as the Greeks — who invented the enactment of drama on the public stage — were concerned, there wasn’t really any story without some element of antagonism. So, if life is throwing us extra challenges, rather than becoming swamped by our feelings or worrying  how we’ll manage, we might step back, become philosophical, and appreciate that at least these developments are keeping things interesting and vital! 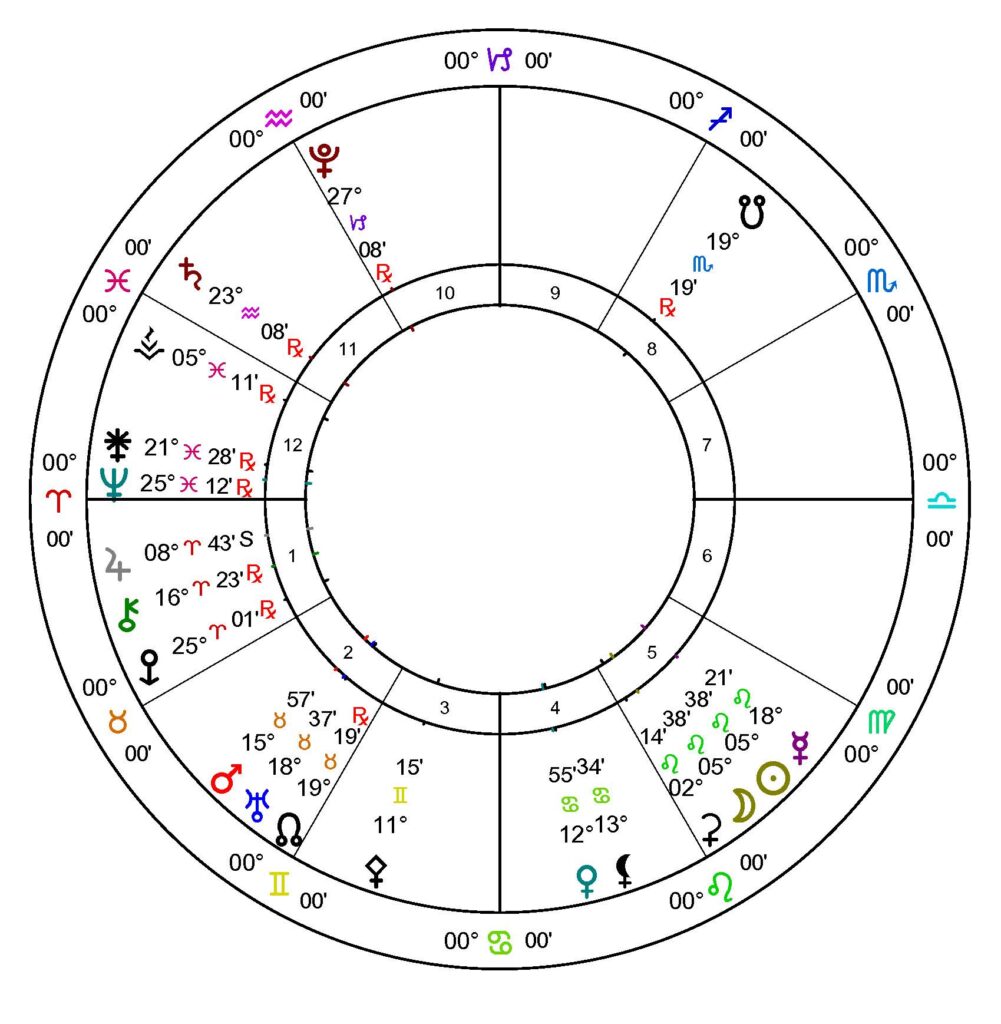 A new astrology library is in the process of becoming. The Celestial Arts Education Library (CAELi), housed on the border of Olympia, Washington, contains thousands of publications on astrology and metaphysics, including the entire Maggie A. Nalbandian Memorial Library, which Kepler College sold in 2021. CAELi is a membership-based research library, not a lending library, open to all who wish to research important texts in our field. TMA Senior Editor Dr. Jenn Zahrt is the person behind this huge project. More details to follow regarding the opening of the library and how you can take advantage of this fresh resource.

September 23–25, 2022: AAGB 54th Annual Conference (online), “Where Do We Go From Here?” Info:www.astrologicalassociation.com.

Ray Grasse on the archetypes behind the often fraught dynamics between Russia and the US.