Editor’s Note: The following is a brief except from Gahl Sasson’s newest book, The Astrology of 2019: Birthing Your Inner Child. The author is a well-traveled astrology teacher who weaves numerology, the Chinese zodiac, and mystical traditions into his work. Along with overall guidelines for the year, the author includes specific dates for initiating projects, the most significant aspects for each planet for the year, detailed forecasts for each zodiac sign (with particularly useful insights on eclipses), and much more. As a hint of what’s to come, 2019 is the Year of the Pig in the Chinese zodiac (from February 4, 2019 to January 25, 2020). Sasson writes: “The year of the pig is also the year of the boar and in many traditions, the boar represents defensiveness, protectionism, and warlike tendencies. With all the trade wars and the rise of nationalism, one can only hope that 2019 is a piglet year rather than a boar.” Gahl Sasson is uplifting, empowering, and practical. The current book is much longer than the author’s 2018 version, which I reviewed here. The book is available on Amazon: e-book: $6.42; print: $12. 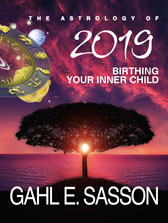 I believe that when our hominid ancestors started walking on two legs, their field of vision changed, shifting their focus from the earth to the skies. In addition, due to climate changes, hominid environment morphed from thick jungles where the skies were covered by jungle canopy, into open fields, savannas where the starry skies could be viewed with no obstruction. Our ancestors were exposed to the vastness of space and could bear witness in awe to the movement of the planets through the backdrop of the fixed stars, the constellations. First there was astrology, then came religion to give ritualistic stories to the movement of the cosmic bodies and the seasons.

Astrology’s DNA is found in countless religions and traditions around the globe. The Mayans, Aztecs, druids, and ancient Egyptians aligned their pyramids or rock formations in reference to cosmology. In Islam, the Ramadan, a commemoration of the first revelation of the Koran, is celebrated according to the Moon and always falls on the 9th lunar month. The Buddhists celebrate the Buddha’s birthday on the Full Moon in the month of Vesakha (which usually falls on the Full Moon in Taurus). Christmas is a Christianized celebration of the pagan winter solstice, placing Jesus’ birthday on the solstice along with Mithras, Attis, Apollo, Artemis, and Horus to name a few.

Passover is the celebration of equinox (which falls on the first Full Moon after the equinox). Easter is celebrated according to an astrological formula: the first Sunday (the day of the Sun) after the first Full Moon (Sun-Moon opposition) after the spring equinox (the first day of Aries). The Chinese, Islamic, Tibetan, and Jewish New Years, fall on a New Moon. The Persian New Year, Nawruz, is celebrated on the spring equinox, the first day of Aries, which is also the astrological New Year’s. Halloween is celebrated during Scorpio, the sign of death. Earth Day is commemorated during Taurus, a fixed earth sign that is associated with Mother Nature. Labor Day (in the US) is celebrated during Virgo, the sign of work and service. The International Cat Day is celebrated August 8, the 8 of the 8, double happiness, smack in the middle of Leo, the feline sign. Your birthday, too, is an astrological holiday. It is the day when your natal Sun is conjunct the transiting Sun. It is a day when you are exposed to two Suns. No wonder that on your birthday you are emotional, overly sensitive, and in need of extra attention and gifts.

Astrology is not a fortune-telling art. She was created and still functions as a tool to help us survive. I trace the origin of astrology to a woman or a group of women in our early human evolution that realized the connection between intercourse and pregnancy. There was a period in our evolution when the main cause of death for women was giving birth. Because of bipedalism, the combination of a shift in the pelvis and the growing diameter of the fetus’ head, childbearing became a deadly activity. There had to be a woman, arguably, the most important scientist in human history, who discovered that intercourse leads to pregnancy and that somehow these two are linked to the menstruation cycles. Now all she needed was to find a way to trace the cycles and measure them to determine when intercourse will not result in pregnancy. She needed a contraceptive. Looking up at the Moon gave her what she sought, a cosmic clock. This intuitive woman, the first astrologer, managed to find a connection between the Moon cycles and ovulation: as above so below, the birth of astrology. The wisdom of the stars, astrology, helped us survive as a species and ensured our ability to overcome the death that overshadowed birth.