“The unlike is joined together, and from differences results the most beautiful harmony.”
– Heraclitus 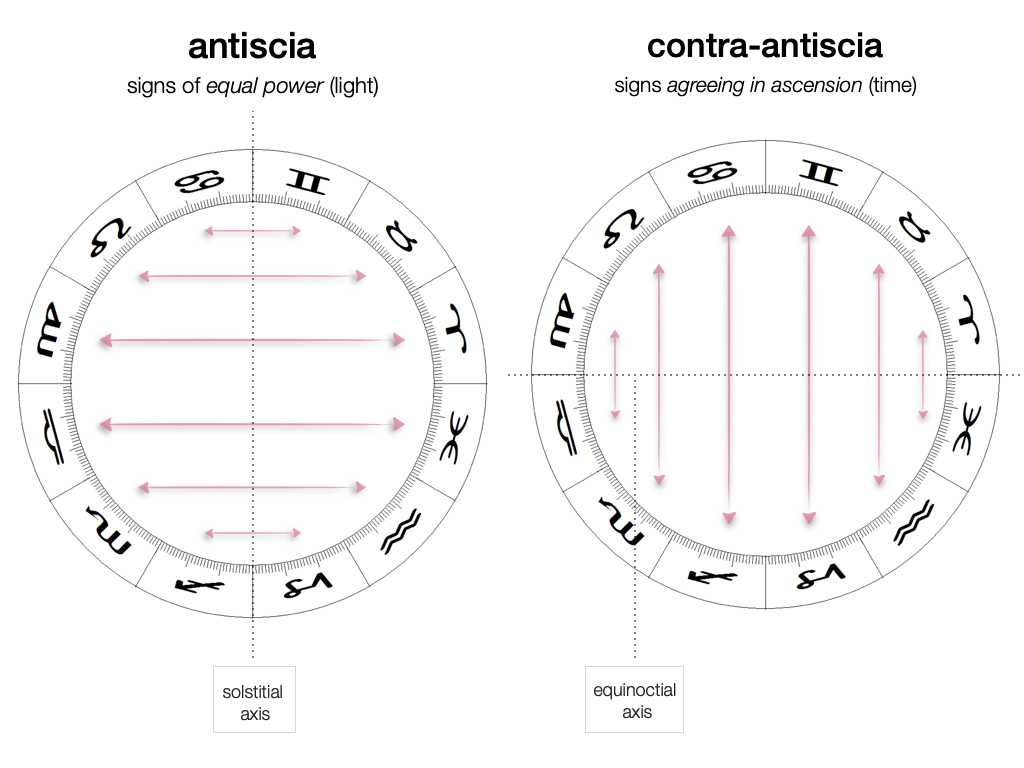 Antiscia are useful in natal work as well as in synastry and timing. Consider the charts of former president Barack Obama and Michelle Obama. The Moon in Barack’s chart resides at 3°21’ Gemini and precisely reflects Michelle’s Sun at 26°–27° of Capricorn (birth time unknown). (1) (2) This is a clear example of a contra-antiscia synastry link, a connection we would otherwise regard as averse, having no affinity or aspect. Note here that antiscia and contra-antiscia are effective and illuminating for charts without an exact time. 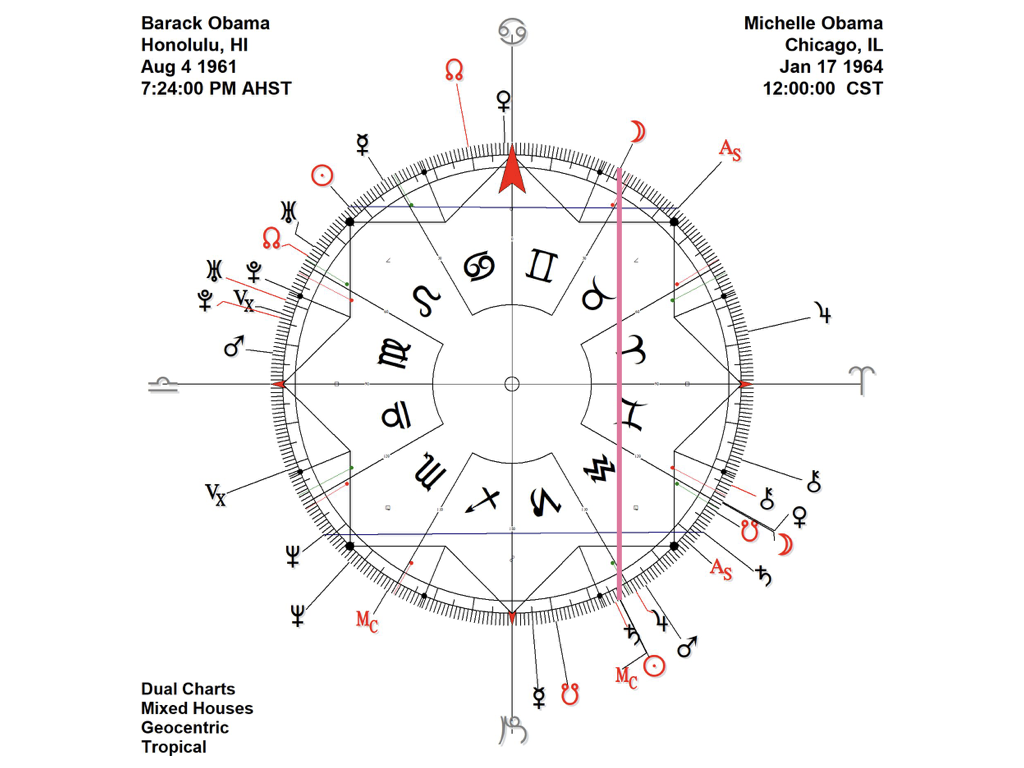 Astrology involves the science and living symbolism of light. Planets reflect the light of the Sun, and the path of the Sun (as we see it from Earth) defines the ecliptic we utilize as our zodiac. Light and dark, day and night, and the turning of the seasons affect everything on Earth. Rhythms in light determine the calendar and 12 zodiac signs, conveyed through the sequence of the seasons. The most important turning points within the Sun’s cycle occur at the Cancer and Capricorn solstices (Sun standing still) and Aries and Libra equinoxes (equal day, equal night). At these turning points, the Sun comes to 0° of each of the four cardinal signs

These stations of the Sun (solstices and equinoxes) within its annual journey through the ecliptic not only demarcate the pivotal changes in season but since ancient times they also have been central to the reciprocal relationships between humans and spirit, ancestors and land. As far back as 3100 BCE, ancient people erected stone monuments in alignment with the solstices to reflect the light of the Sun rising, such as Newgrange on the winter solstice. The stone’s casting of solstice shadows connected the light of the Sun with symbolic engravings in a sacred relationship. 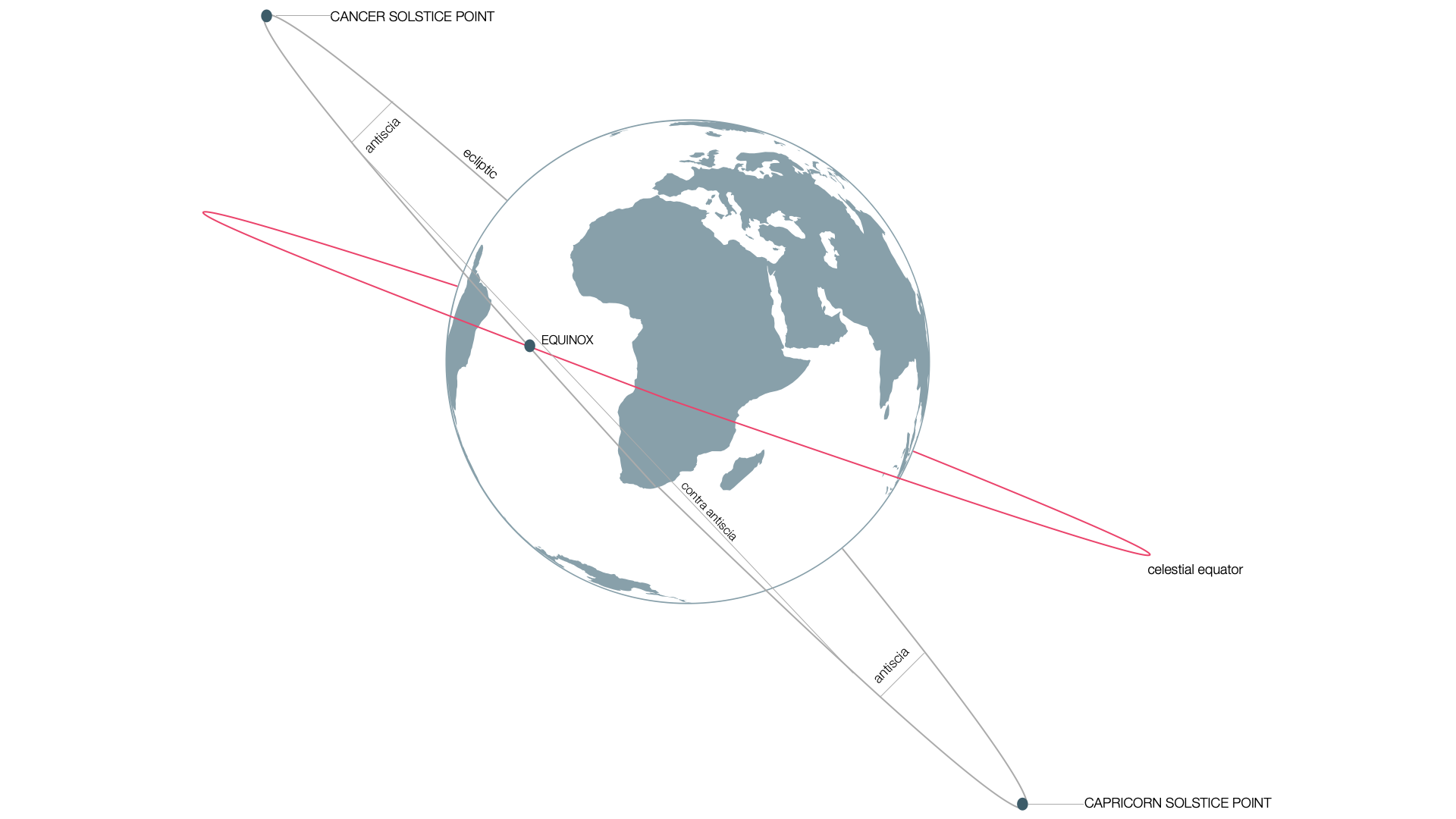 What makes antiscia and contra-antiscia unique is their symmetry around the four seasonal turning points, or cardinal axes (0° of Aries, Cancer, Libra, and Capricorn). The word antiscia comes from the Greek term scia, meaning “shadow” or “shade.” Just like shadows connect heaven and earth, antiscia bring degrees within the zodiac into relationship with the vital potency of the cardinal axis and the way it marks points of change within the life cycle of growth, death, and renewal. Given that the Sun’s relationship to the Earth animates and supports all life, the cardinal axes becomes a living, breathing expression of the divine spark in matter. This could be perceived as the anima mundi, or world soul, embodied by the celestial sphere and the Sun’s path from our perspective on Earth.

Antiscia are tangible aspects of the anima mundi. When days grow longer or shorter, we see the change in the Sun’s light and experience its warmth differently. Aspects formed through antiscia and contra-antiscia thus become unique, memorable, earthy, and real, as they bring the relationship between the two zodiacal degrees into connection with the world soul of the cardinal axis. This results from the four points of the cardinal axes serving as midpoints to the placements forming connection through antiscia and contra-antiscia. Like a triangle with its apex, the center point (in this case, the cardinal axis being the midpoint) focuses the energy. Three distinct components are tied together, with the midpoint conducting and guiding energy like an intermediary. With antiscia, the focal point is the cardinal axis.

Think of antiscia like looking at a calendar day and its partner day at another point in time. Because antiscia involve symmetry with the solstices, the days share equal amounts of light. Ancient astrologers referred to signs in antiscia as signs of equal power. Envision 50 days before the solstice and 50 days after. These days are antiscia to each other because they share the same amount of light and dark. As a result, antiscia signs were commonly referred to as seeing signs.

In contrast, signs in a contra-antiscia relationship form a midpoint with the equinoxes, the sacred days of equal light and dark around the world. This means that instead of having equal amounts of light, the signs that combine through contra-antiscia share the symmetry of having equally contrasting amounts of light. For example, 19 days after the spring equinox has just as much light as the 19 days before the spring equinox has dark. However, signs in contra-antiscia do share the quality of time, as they are signs of equal ascension within the diurnal rotation of the zodiac. Thus, signs in contra-antiscia are signs of equal rising, which were sometimes referred to as agreeing in the journey due to their shared quality of time.

The major geometric configurations astrologers consider to be aspects include the four traditional aspects of sextile and trine (60° and 120°), and square and opposition (90° and 180°). Some practitioners use more obscure, though fascinating, aspects like the quintile (72° — the circle divided by five), and so on. With antiscia, it’s not the degrees between planets that make the connection, it’s the equidistant relationship between planets with a common center defined by the cardinal axis.

By traditional so-called Ptolemaic aspect, signs that “see” each other are those that share some affinity. Affinity occurs through sharing triplicity (elemental) as in the trine, or quadruplicity (mode) as in the square, or day/night sect (gender) as in the sextile and opposition. Signs not making one of these aspects cannot see each other and are said to be in aversion. One of many reasons to explore antiscia in your practice is the fact that many ancient astrologers wrote that antiscia and contra-antiscia mitigate aversion.

For example, Ibn-Ezra, a 12th-century philosopher and astrologer stated the following about contra-antiscia, “You always have to look at degrees that are of the same ascension. An example is when one planet is 10 degrees Aries and the other is 20 degrees Pisces, so the distance of both of them from the Line of Justice [equinox axis] is equal and they are considered as being in conjunction.”(3) Esteemed 17th-century astrologer William Lilly wrote that signs in antiscia share the same virtue, likening antiscia to sextiles and trines, and contra-antiscia to squares and oppositions. In chapter 19 of Lily’s Christian Astrology, you’ll find a table of “signs not beholding one another,” which reveals that he considered these contacts as ways signs see each other.

Fascinatingly, while cardinal and mutable signs form antiscia and contra-antiscia relationships (i.e., Libra and Pisces, Capricorn and Gemini, etc.), the fixed signs only form antiscia and contra-antiscia with other fixed signs. Thus, there is a special case where fixed signs can simultaneously form whole sign square aspects while also forming a connection through antiscia or contra-antiscia. For example, Vice President Kamala Harris has Mercury at 1°27’ Scorpio in antiscia to Saturn at 28°27’ Aquarius. (4) Fixed signs Scorpio and Aquarius “see” each other through a whole sign square, while at the same time their midpoint equals 0° of Cancer/Capricorn, which means they also “see” one another through exact antiscia. In her chart, we also find the Sun in late degrees of Libra antiscia to the Midheaven in early Pisces (cardinal sees mutable), while the Midheaven also reflects her natal Full Moon in Aries by contra-antiscia. This brings several important personal points — the Sun, Moon, Midheaven, along with Mercury and Saturn — together in direct relationship with the world: the world soul of the cardinal axis. 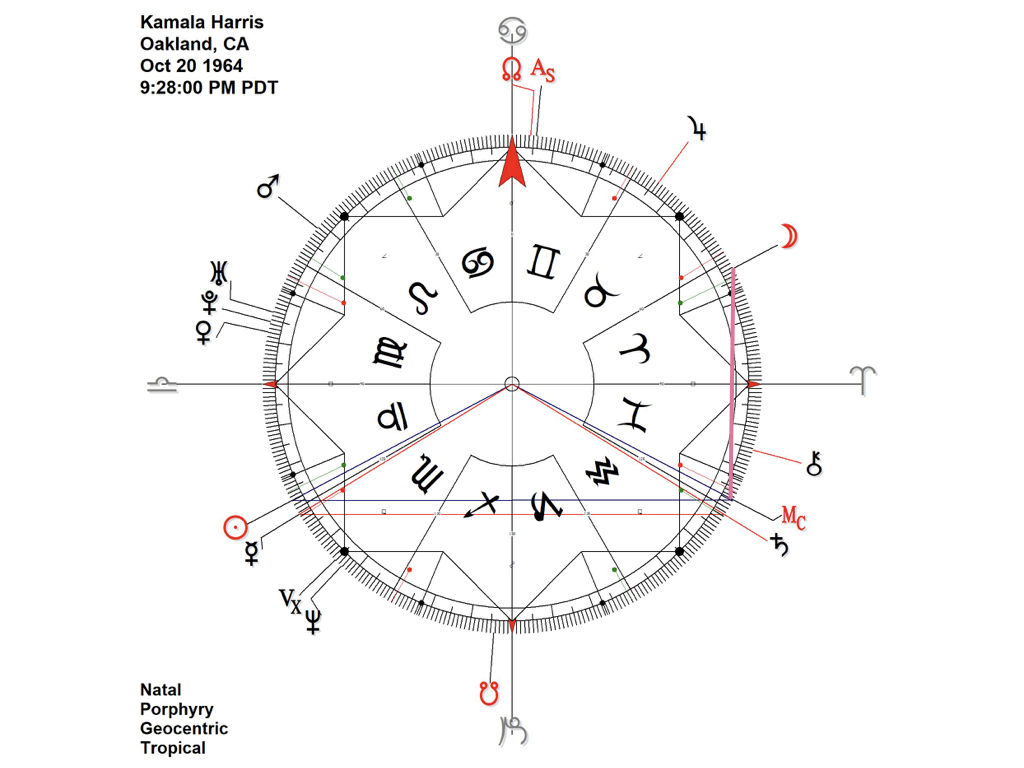 In recent world events, Russia invaded Ukraine as transiting Saturn in Aquarius moved from an exact square aspect with Uranus in Taurus into a contra-antiscia relationship. When Russia invaded Ukraine on February 24, 2022, Saturn was at 18°14’ Aquarius and Uranus was at 11°23’ Taurus. The two planets were applying and perfecting in exact contra-antiscia aspect. While the long-standing tension between Saturn in Aquarius and Uranus in Taurus (square aspect) would correspond with the escalation of conflict within the Ukraine, the fact that the invasion began at the same time that Saturn and Uranus formed a contra-antiscia connection reveals the highly visible impact made by planets forming antisica aspects.

Saturn and Uranus forming a midpoint to 0° Aries signifies an event of major world impact because of the significance of the cardinal axis in mundane astrology. Astrologers also call the cardinal axis the Aries point or Earth point. The Aries point is the Sun’s node, as it is the intersection of the ecliptic and Earth’s equator, and is the point we all share (node simply means intersection). As a result, some astrologers interpret the Aries point and the cardinal axis as relating an individual to the general public. Thus, it could be said that the volatile irritability and tension of Saturn and Uranus reflecting the world point brought their shattering impact more acutely into mundane events.

When we apply secondary progressions to the mundane chart for Ukraine (set for Kiev on August 14, 1991, 6 p.m. EEDT, when Ukraine proclaimed its independence from Russia), it’s noteworthy that we find Ukraine, as a nation, entered a secondary progressed Full Moon on December 18, 2021, at 00°24’ Aries, putting both the progressed Sun and Moon at the exact degrees of the cardinal axis. (5) At the time of the Russian invasion, the secondary progressed Sun of Ukraine was at 00°35’ Libra, and so the progressed Sun of the lunation was at the midpoint of the contra-antiscia connection between transiting Saturn and Uranus on the Earth point. Furthermore, the 2021 Capricorn ingress chart set for Kiev reveals a 0° Aries Midheaven. These additional activations of the cardinal axis for Ukraine could be seen as priming the nation for the impact of Saturn and Uranus, reflecting the Aries point.

In your own personal life, you may have noticed the influence of Saturn and Uranus by transit taking on another level or intensity as they recently came into a contra-antiscia relationship. If new to the topic, make time to explore any antiscia or contra-antiscia contacts within your own chart, or within synastry with significant people in your life. Once you start on the journey of antiscia, you will find there is an endless supply of enticing paths to follow.

Kate Petty is an eclectic astrologer combining modern methods with traditional techniques. She currently focuses on Symmetrical/Uranian, Hellenistic, Early Medieval, Early Modern, and Indian (Vedic) astrologies. She has lectured at conferences in the United States and abroad. Kate’s website includes a list of monthly antiscia among other resources. She offers personalized online mentorship and has a great passion for consultation work with clients. Outside astrology, Kate is a visual artist and volunteers providing confidential emotional support to women living in prison. Contact her at Ambient Astrology

Gray Crawford is a practicing natal and horary astrologer who lives in Olympia, Washington. Gray brings a relational, imaginative, and psychological approach to the living symbolism of astrology, using techniques drawn from ancient and modern sources. Gray has spoken at UAC, NORWAC, the Washington State and Oregon Astrological Associations, and the Portland School of Astrology. Gray writes astrology articles on his site Gray Crawford.net