“As our soul, which is air, maintains us, so breath and air surround the whole world.”
— Anaximenes of Miletus, 6th Century BCE (1)

In the previous blog in this series, we noticed how the philosophy of Anaximenes lay the foundation for the Western understanding of the nature of the four elements (via four qualities), as well the system of heavenly spheres by which the Ptolemaic Cosmos was later arranged. (2) Amazing as these innovations in thought were, and as fundamental as they became, Anaximenes took another more radical step in his philosophy. He implied a connection between the microcosm and macrocosm, and thereby lay the foundation for the concept of an Anima Mundi, or World Soul, later formalized by Plato in Timaeus.

In her seminal work on retrogrades, Erin Sullivan refers to this contrast, between the macrocosm or collective and the microcosm or personal, as an important means of focusing the retrograde experience. (3) She notes that the extended stay of Mercury in the element (in this case, Air) is something experienced collectively, by everyone. However, on an individual level, each of us experiences this through the lens of our personal chart, via certain houses. She notes that the collective experience of Mercury retrograde in Air will be defined by an archetypal need to re-examine the meaning of relationship, and the relationship patterns which arise from the techniques we habitually employ. She recommends paying close attention to how one creates, develops and maintains relationships during this time.

For example, in 2008, only 13 years ago (also a Mercury Elemental Year of Air) Facebook became the most visited website in the world. We live now in an age where social media has become an extremely significant part of how we relate to one another. However, as the recent documentary The Social Dilemma illustrates, this trend in how humans relate to one another also has potential negative side effects and consequences. (4) Each one of us has to decide how to deal with this collective dilemma, and that will depend on the houses activated in the personal chart.

In my own book, I went a step further and sorted the houses into four basic combinations, based on the rising sign of an individual nativity. (5) Using the ancient whole sign house method (also employed by modern horoscope writers) in a given nativity, the three signs of the Air triplicity will represent either houses 1,5,9; houses 2,6,10; houses 3,7,11, or houses 4,8,12. I then use the angular house of each of these combinations to define the meaning of the group of three (trigon).

As an example, houses 1,5 and 9 are labeled the Trigon of Identity. It is posited that these retrogrades will most significantly impact the nature of the various social personas available to the person (1st house); the creative outlets which arise from their choice of persona (5th house), and the new horizons which open up as a result of engaging these creative opportunities (9th house). For a more concrete example, I was born in 1968 (also a Mercury Elemental Year of Air) with Aquarius rising; these periods have a long history of being important in my personal development. It was at the end of a Mercury Elemental year of Air (in 2002) that I was first published in the print version of TMA (following a retrograde in Libra, my 9th house). At the next Mercury Elemental Year of Air, specifically during the Aquarius Mercury retrograde in 2008, I posted my first podcast (for which I had consciously chosen the day of the inferior conjunction). I also joined Facebook later that year. So, the persona of an internet astrologer — newly available to humanity at that point, became further activated through social media and podcasting as a way to manage my relationship with the collective. This opened various other creative opportunities. For instance, in 2009 because of a Facebook post I had written, TMA founder Tem Tarriktar invited me to begin blogging for the magazine website. I found new horizons by continuing to engage creatively with this media. In 2015, as the Mercury Elemental Year once again returned to the Air element, I re-branded my podcast according to my burgeoning alignment with Hermetic philosophy. I also hosted my first Sky Astrology Conference (an international event), began work on my book, and connected with a publisher.

Now, as the Mercury retrogrades return to Air once again, it is time for me to re-examine my relationship to social media and podcasting, and more generally my role as a modern astrologer who makes their living via the internet. Beyond the ethical dilemma social media poses, at this point my practice has grown such that I literally don’t have the time to tend to an active online presence. And, if I am honest, my desire to do so has also changed. Fortunately, I have a couple years to try out new and different ways of dealing with my social (Air) identity (houses 1, 5 and 9).

In fact, it’s not just possible but probable that anyone with an Air sign rising will be facing a similar process, though, of course unique to their life story. It should definitely be insightful and helpful to go back over the last few installments of the Mercury Elemental Year of Air — with an eye toward developments in the Identity Trigon of houses, 1, 5 and 9. To this end, here are the last three corresponding entries from the 125-year ephemeris at the back of my book. 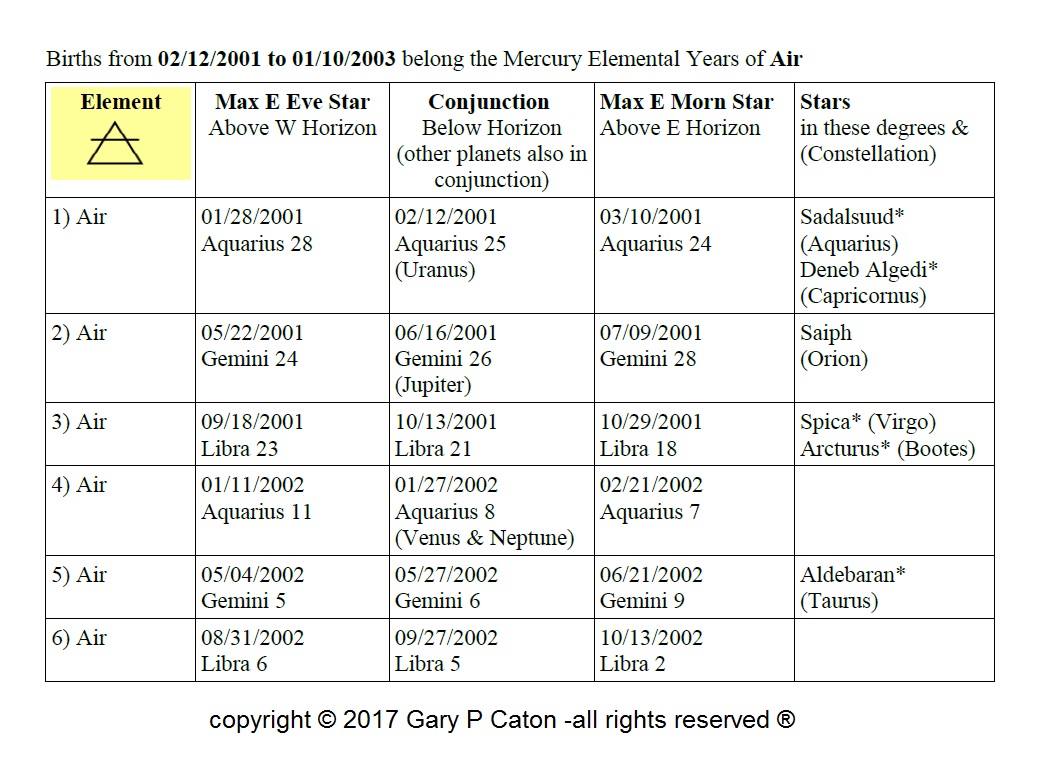 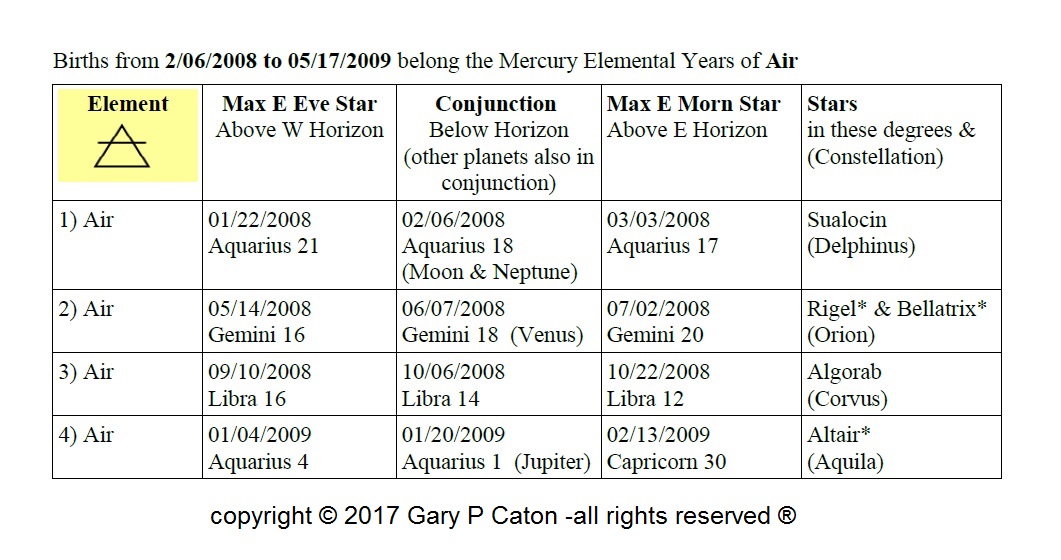 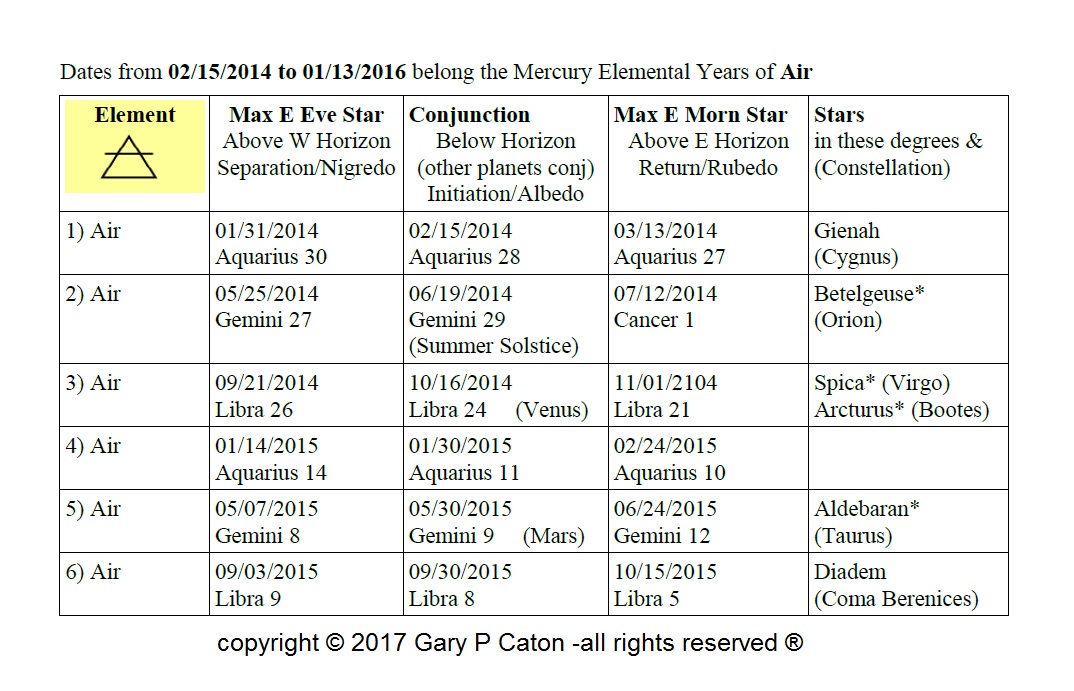 Now, let’s look at the other Trigons. Again, using the ancient whole sign (and modern horoscope writer) system for Earth rising signs, the Mercury Elemental Year of Air will activate houses 2, 6 and 10. Because the 10th is related to career, I have dubbed these houses the Trigon of Mastery. It is posited that these retrogrades will most significantly impact the resources, both tangible and intangible, which are available to a person (2nd); the skill sets they develop in learning to manage these resources (6th), and the career that develops as a result of bringing these skills into the public eye (10th). Some of the celebrity examples I use in my book of people with Earth rising signs, and specifically during Mercury Elemental years of Air: Judith Resnick, Paul McCartney, Dave Grohl, Jean Cocteau, Tiger Woods, Georgie Ann Geyser, Bob Hayes, Roy Orbison, and Buddy Holly. A look at the charts and biographies of these people should be instructive on ways to handle this combination.

For Fire rising signs, the Mercury Elemental Year of Air will activate the houses 3, 7 and 11. Because the 7th is about relationships, I have dubbed these houses the Relationship Trigon, and it is posited that these retrogrades will most significantly impact the 7th house of one-on-one relationships; the 11th house of intra-group relationships, and the 3rd house of inter-group relationships. Here we see a somewhat novel concept that I found when examining these trigons: Essentially there are three types of relationships — person-to-person as individuals (7th); person-to-person within a group of common interests (11th), and person-to-person as individuals belonging to different groups (3rd). Some of the celebrity examples I use in my book of people born with Fire rising signs, and, again during Mercury Elemental years of Air, include: Gary Hart, King George III, Martin Heidegger, Barbara Streisand, Anne Frank, Jimi Hendrix, Yo-Yo Ma, Prince Charles, and Marianne Alireza. A look at the charts and biographies of these people should be instructive on ways to handle this combination.

For Water rising signs, the Mercury Elemental Year of Air will activate the houses 4, 8 and 12. Because the 4th is about family, but also legacy, I have dubbed these houses the Trigon of Dynasty. It is posited that these retrogrades will most significantly impact the 4th house of biological family and ancestry; the 8th house of marital, business and extended family, and the 12th house of spiritual family. Some of the celebrity examples I use in my book of people born with Water rising signs (during Mercury Elemental years of Air) include: William Blake, Aretha Franklin, George Sand, Barbara Jordon, Jaqueline Kennedy Onassis, Phil Donohue, Tenzin Gyatso (14th Dalai Lama), Edith Piaf, and Frank Capra. A look at the charts and biographies of these people should be instructive on ways to handle this combination.

(1) See here for more on Anaximenes, and the other Pre-Socratics:

(2) I outlined the Air year in overview for the TMA blog here.

Bio:
Gary P. Caton is an Hermetic practitioner integrating diverse traditions, art forms and practices gathered from his spiritual quest over a full Saturn cycle now. Initiated an astrologer by a magnificent dream in 1993, he’s since become an accomplished counselor, writer, podcaster, teacher, photographer and mage. Gary is the author of Hermetica Triptycha: The Mercury Elemental Year, and host of the popular Hermetic Astrology Podcast. Connect with him at Dream Astrologer.